I am currently preparing a study on the Fifth Chapter of Acts, which I will be leading with our Home Church group.  We are a small group of people who have become increasingly "dissatisfied" after years spent in the Church building.   For some of us that means that following the traditional picture of Church life has left us lacking the sustenance necessary to live fruitful lives for the Kingdom of God.
My husband and I, for instance, aren't satisfied with feeling comfortable in our faith.  By that, I mean that we were beginning to see that too many within the confines of Western Christianity were not being challenged to seek harder after Christ.  Ultimately, we discerned that we were hungering for meat, but weren't even being fed milk -- in effect, we were starving for a morsel of real association with our God. 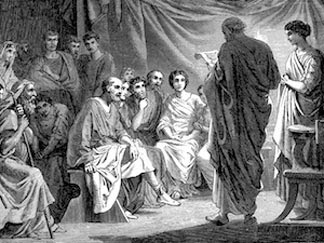 And so I find myself jealous of the new Church that I found in the Book of Acts.  In Chapter 4, the Bible tells us that the Holy Spirit filled and controlled Peter, as he gave a powerful sermon on the Day of Pentecost, bringing 3,000 people to the saving grace of Jesus.  Later, Peter was once again filled with the Spirit as he faced the Sanhedrin and proclaimed his authority through the power of Jesus to heal a man who had been lame for 40 years.  The boldness to stand up to the rulers of the Jewish people could only have come under the influence and guidance of the Holy Spirit!
But here is what made me jealous ... after relating that the Sanhedrin had let Peter and John go, (although they could have been arrested and even executed as Jesus had been) ... the members of this new First Century Church all lifted their voices together, with one united mind, and prayed that they, too, might receive the same kind of Spirit-filled courage and confidence.  Then in verse 31 of Acts 4, the Word says, "And when they had prayed, the place in which they were assembled was shaken; and they were all filled with the Holy Spirit, and they continued to speak the Word of God with freedom and boldness and courage."
Do you see that happening in the Churches of America today?  Where is the boldness and the courage to stand up to rulers who would deny the power of Christ to perform miracles through us, just as He did through those who believed in Him in the First Century?  Where is the Church who has been physically shaken by the presence of the Holy Spirit in its midst?  I'm not seeing it, are you?  And don't tell me that God only showed Himself at the establishment of the Church because He needed to make an impact and "get the ball rolling"!  God wants to see us express the same freedom to declare the miracles He has done in our lives; and He wants to fill more "Peters" with the Holy Spirit so that they will be bold in proclaiming that the very power that resurrected Jesus is the same power He can give us to bring about His Kingdom; and last, but not least, He wants to shake our Church buildings with His presence! 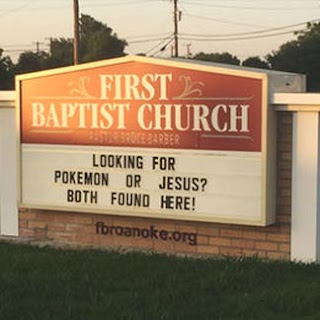 Instead, what do I see?  Churches that embrace some new digital version of the old Pokemon game in order to pathetically attempt to make themselves relevant to an increasingly immoral and corrupt culture.  Obviously, participating Churches don't believe in the sufficiency of Scripture to relate to this sinful world.  Unlike the early Church, which was perceived as weak due to a lack in numbers, a lack of experienced leadership, and being opposed by institutions that had existed for hundreds of years (Sanhedrin, Rome), today's Church should be a strong and formidable opponent to an immoral society.  After all, our mega-Churches seat over 5,000 people every Sunday, and there are Pastors whose names are known world-wide and who have formed lucrative businesses through their ministries --- yet these culture-craving Churches feel the need to partner with Pokemon, on the chance that some might be saved.  And the Church justifies this collaboration by promoting a campaign of "Chase Pokemon and find Jesus".  Somehow they believe that the Word is not enough to save souls; Jesus needs a little help from Pokemon.  Disgusting!
But I don't know which is more offensive to me ... the Pokemon collusion, or a statement made by Pastor Larry G. Mills of the Mt. Sinai Missionary Baptist Church at the #LoveOrlando Citywide ecumenical prayer-fest, hosted by Southern Baptist Megachurch, FBC Orlando.  Pastor Mills made reference to a passage in Ephesians, Chapter 2:  Therefore you are no longer strangers and foreigners, but fellow citizens of the saints and members of God’s household, built on the foundation of the apostles and prophets, with Christ Jesus Himself as the cornerstone. In Him the whole building is fitted together and grows into a holy temple in the Lord.…
But he twisted the Word of God, because you see, Scripture is not quite sufficient to meet the needs of today's diverse and immoral culture.  Here's how he explained the meaning of that verse:  We’re not peculiar because of race or gender or creed. But in Orlando we are peculiar because of E. Pluribus Unum. Out of many come one. We are peculiar because we have leadership that knows how to fight….We are peculiar because we know how to let theological differences and disputes and factions not get in the way of love and Christ. We are peculiar… because we believe in the Word, and what others would have against us, what others would show as a stumbling stone, we’ve elevated to be the head of the corner, and right now, no matter what people might think, that LGBTQ area is the head cornerstone, and we are here to lift up and magnify, and allow them to know, that regardless of people’s opinion, regardless of where we are, love triumphs over evil. 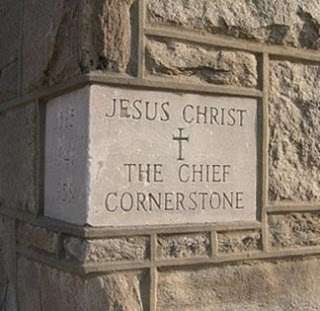 Anyway you look at it, that's Blasphemy!  So how many pulpits have been turned over to the goats?  How many offer an accomodating, though damnable, counterfeit gospel?  This is nothing less than the trampling of the Word of God!  As Bud Alheim wrote at the Pulpit&Pen website: The New Testament is replete with warnings to protect that Gospel, defend it, contend for it. We are warned that many will come, diabolically motivated, who will twist it, conceal it, augment it, or outright deny it. False messiahs, false teachers, false prophets will be employed by the enemy of our God to keep the masses traveling on the wide path that “leads to destruction".  That my friends is called the Apostasy of the Church.  You may have wondered exactly what that meant or what it would look like.  Well, there it is!  It is a falling away from what the Church was designed to be and do.
These examples I've given you are just two of the many ways in which the Western Church has veered off the narrow path of Life.   And sadly, it doesn't even come close to matching that First Century Church in the Book of Acts in the scope of their desire to glorify our Lord Jesus.  Instead, these are the churches and the pastors who will one day stand before Him and plead, “Lord, Lord, did we not …?”

Titus 1:15-16     "To the pure, all things are pure, but to the defiled and unbelieving, nothing is pure; but both their minds and their consciences are defiled.  They profess to know God, but they deny him by their works. They are detestable, disobedient, unfit for any good work."