How Seriously Do You Take Your Citizenship? 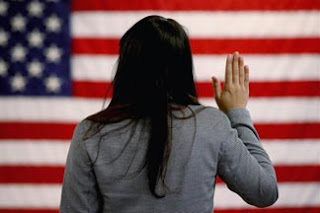 I think it's safe to say that every American is aware that we are in the midst of a heated political season.  The upcoming Presidential election is not only one of the most interesting contests we've seen in awhile, but it appears to me, at least, that Americans are taking their citizenship seriously.  But what does it exactly mean to be a United States Citizen?  Besides being a legal inhabitant of our nation, what are our responsibilities and duties?  How do we show our allegiance to our country?  On a simple level, our duties can be separated into two groups:  mandatory responsibilities, such as paying taxes; and duties not demanded by law, such as voting.  On a civil and public level, we are called upon to respect the rights, beliefs and opinions of others — even if we think they're "extreme," "outrageous" or "morally wrong."  We are to stay informed of the issues that affect our community.  We are to serve on a jury if called to do so.  We are to participate in the democratic process.  And, finally, we are to defend our country, if the need arises, both from foreign and domestic enemies.
That identifies our duties and obligations as citizens of this country.  But are you aware, that if you call yourself a Christian, you are first and foremost, a citizen of Heaven?  But how does that compare and contrast with our citizenship in this country?  First of all, as an earthly citizen, we know that if we are born in the U.S., we legally belong to this country and we have the rights and protection of this country.  But guess what?  When we are born again by faith in Jesus Christ, we are born into the Kingdom of Heaven, and our real citizenship is in Heaven.  We are, in effect, a colony of people living at an outpost of the Kingdom.  We are living at some distance from the residence of our King, and we are a branch of His Kingdom.  So, how do the two "citizenships" differ, and how do they affect each other?  It's really very simple ... how you live your life as a citizen of this country must reflect your citizenship in the Kingdom of God.
If we are reborn in Christ, we also legally belong to the Kingdom of God, and we have the rights and protection that belong to citizens of that Kingdom.  The problem is that we have to decide how we are going to live while we are temporarily existing in this remote location.  If we are a true citizen of Heaven, then similar to the responsibilities of citizens in this country, we must respect and follow the belief system of our Father; we must stay informed about Scripture and the issues that affect God's Kingdom on earth, represented by us; we must be willing to participate and serve as our King's servant -- even if it generates a hostile environment; and finally, we must defend His kingdom, both from spiritual and human enemies.
But, we must also admit that every human being is born into the kingdom of this world, in which Satan rules.  And because citizens tend to adopt the culture and practices of the nation or kingdom in which they reside, we too often grow up adopting the culture and the practices and values that characterize satan's kingdom.   (Just look at how easily the Jews, who had a covenant with their God, abandoned their connection to YHWH -- and adopted the culture and values of Babylon -- during the relatively short period of 70 years in captivity).  Like those ancient Jews, we can easily become citizen-slaves to satan and this world, and live by his rules and value system. 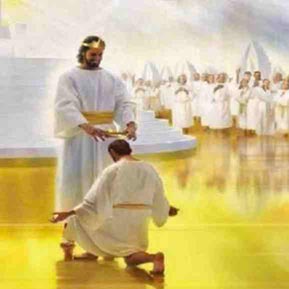 When God grants us citizenship in the Kingdom of Heaven, through faith in Jesus, we become “new creatures”.  We no longer desire to be citizens of this world and we become citizens of an eternal kingdom where our Father is the King.  We are given the power and privileges of citizens of that kingdom and we are adopted into the family of God.   Our focus then turns toward eternal things,  storing up treasure in heaven, and receiving our inheritance and rewards.
Now, I know that those last words -- "inheritance" and "rewards" -- will scare many Christians; mainly because they incorrectly associate them with doing good works to get into heaven.  That's not what Scripture says!  Receiving our inheritance and rewards as citizens in the Kingdom of God is separate from receiving eternal life, and is something above and beyond that gift of amazing grace.
The website redeeming god.com explains this concept very well:  "Eternal life is a free gift of God to all who simply (and only) believe in Jesus for it. When we believe, we are adopted into God’s family and become His children.  Honor, privilege, and recognition is our Inheritance at the Judgment Seat of Christ, and is reserved for those children who live as Jesus lived and follow God’s will and ways for our lives.  Just as rebellious and unfaithful children are sometimes written out of their parent’s inheritance in this world, so also, (while God will never abandon or forsake His children), we can lose some of our inheritance if we fail to follow Him."
Rewards, on the other hand, are added bonuses or additional incentives God offers as a way to encourage faithful living and self-sacrificial love for others.  Careful examination of Scripture reveals that there are crowns that will be given as a special token by our Lord to honor and reward all of those who have faithfully served Him in this life – way above and beyond what the average Christian would have considered doing for Him.  These rewards are the 1) the imperishable crown, 2) the crown of rejoicing, 3) the crown of righteousness, 4) the crown of glory, and 5) the crown of life.   These crowns, or rewards, are what the Apostle Paul was referring to when he said, in 1 Corinthians 9:24-25, "Do you not know that in a race all the runners run, but only one receives the prize (reward)? So run that you may obtain it. Every athlete exercises self-control in all things. They do it to receive a perishable wreath, but we an imperishable." 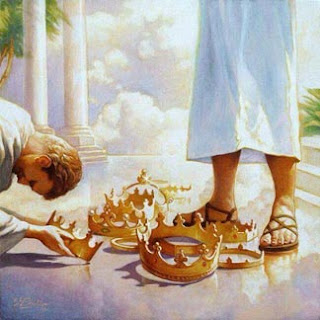 But here is the irony of the honor and recognition that will be ours at receiving those rewards ... On that day, when we relinquish our citizenship on this earth, and enter into our eternal citizenship in Heaven, and stand in the presence of the Lord Jesus Himself, all good deeds we have done will pale in comparison.  At that moment, we will lay those crowns at His feet, because we know that despite what we may have done on earth to earn these rewards, only Jesus is truly worthy of glory and honor.
And that marks the character of someone whose citizenship in Heaven is more valuable to him/her than their citizenship here on earth.  I know that, at the moment, our future seems all tied up in the next election for the Presidency of the United States.  But the reality is that we live for a short time in these physical bodies, and we should be anticipating our future in our real home.  We should consider ourselves as only ambassadors to this earth; our actual citizenship is in Heaven, and we are only here until our Father sends for us and we go home.  Until then, I will endeavor to live my life as a citizen of Heaven, first, and a mere resident in this foreign land I temporarily call "home".

Philippians 1:22-23      "If, however, it is to be life here and I am to go on living, this will mean useful and productive service for me; so I do not know which to choose [if I am given that choice].  But I am hard-pressed between the two.  I have the desire to leave [this world] and be with Christ, for that is far, far better;"
Posted by Pam Kohler at 7:00 AM

Email ThisBlogThis!Share to TwitterShare to FacebookShare to Pinterest
Labels: Heaven, Our Culture.