"On Earth, As It Is In Heaven"

I would like to think I am an optimist.  And my spirit is desperately crying out for a shred of hope.  It is apparent that our nation is at a time of great testing.  There is a fear that hangs over our collective consciousness ... How do we stop a race war?  Is there any way to dispel the distrust and hatred?  How do we forgive, rebuild, and restore human decency to each other? 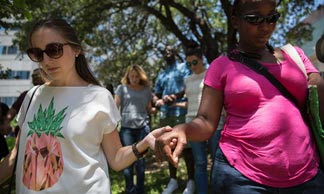 The one thing I can say is that at this moment in time, I am extremely proud of my state, and especially the city of Dallas.  From the Governor, to the Mayor of Dallas, to the Police Chief, to the citizen in the street (both black and white), there is a sense of "we've had enough".  There is some kind of innate discernment among all groups involved that, yes, there is a war being provoked ... but we're not going to participate in it.  And whether or not the public understands that the war is spiritual, I believe that the righteous of this nation are combining their voices in powerful and effective prayer, holding the spirits of chaos and disorder at bay.
Let me put it another way ... my spirit is sensing that not only is there a war in the streets of America, but there is a war against America in the heavenly realms.  And in the early hours before dawn this morning, I lay awake in bed, trying to figure it all out.  I asked God to show me what that looks like, hoping for some clear download from His Throne Room; for a voice or a vision to make it all clear to me.  Nothing came; no supernatural revelation or unveiling of a divine mystery ... just a sense that there is something big happening.
Then you are probably going to think I'm crazy, but I found my mind wandering, and all of a sudden I pictured that scene in one of the installments of the classic movie series, Aliens; the scene where Ripley wanders into a vast cave-like room and finds the Queen of the alien monster/demons and her nursery of unborn demon pods.  Maybe I just have an active imagination, but in that moment, I got a picture of what the battle against America might look like.
First, let me tell you that this past weekend, my husband and I participated in an advanced spiritual warfare conference, and I will tell you that my mind was greatly challenged.  One of the important things I learned was that within the second heaven, or what is commonly referred to as the spiritual realm, there actually reside many realms .... realms within the realm, if you will.  And within each of those realms, the Enemy has placed a throne on which sits one of the high-ranking commanders within his evil army.  (Remember when Paul refers to the rulers, the powers, the world forces of this [present] darkness, the spiritual forces of wickedness in the heavenly (supernatural) places?  This is what he is talking about).
Well, that image from Aliens gave me a picture of what might be satan's battle plan.  Each of those pods is a ruler our adversary has placed over some area of our national experience.  Think of it as a commander controlling abortion; a general over race relations; a king in charge of sexual perversion; a prince covering the Church.  And the Queen Mother of the Aliens is the Prince of the United States, much like the Prince of Greece and the Prince of Persia mentioned in the Bible.  I don't know the name of this Prince of America -- the principality of satan that claims authority over our country -- but I do know that he is trying to gain authority over every domain of this nation.  But I also know that he is no match for the host of heaven that the praying saints can call down to destroy his schemes.
I have heard numerous stories of people on both sides of the issue that has consumed our nation for the last several days, vowing to not let the madness lead them down the road to further mistrust and hatred; pledging not to turn against each other.  They are rising above the rhetoric of politicians and agitators, to extend the hand of mercy to another human being.  And believe me, that is not what the Enemy wants.  He doesn't want us to reach out to those who may not be of our clan, our tribe, our race, or our nationality.  He wants us to sow the seeds of blame and judgment instead of showing compassion to each other.  And most assuredly, he does not want us to experience healing. 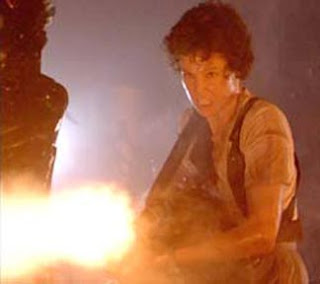 And that's when my picture from the movie, Aliens, comes back into view.  I see Ripley taking that flamethrower and destroying those alien/demon pods, and I see the prayers of the righteous within our nation ascending to the throne room of God.  He uses them like a holy fire to scorch and incinerate the spirit of hatred that the enemy is so desperately trying to sow.
Then this verse of Scripture comes clearly into view: "But the fervent prayer of a righteous man availeth much", and I believe that is exactly what is happening today.  The word "availeth" has such a powerful meaning.  According to Strong's Concordance, it means "to be strong, to have efficacy (effectiveness), force or value; this word denotes strength, to prevail, and indicates a more forceful strength or ability than dunamai, or what we can accomplish on our own".  In other words, I believe that the calm we see in Dallas and among other communities can be effected by our prayers which can call down heavenly fire and armies of angels to do battle on our behalf among these spiritual realms.
Don't get me wrong, the war is being fought with deadly power in the second heaven.  There is an assigned ruler over Baton Rouge, and one over Atlanta, and one over every major city where we are seeing protests and violence.  And we will continue to see small victories by the Enemy's agents, but I am going to keep on believing that our prayers can and will have a mighty and binding impact upon the spiritual forces determined to take control of this nation.
The Enemy and his wicked forces have tried to make us a culture of sin and death, and to divide us by the color of our skin.  They are trying to sow seeds of wickedness, violence, chaos and division, and the people of this nation are suffering from the fruits of the Enemy's strife and discord. But I believe that impassioned prayer can soften a hard heart, and I know the hearts of this nation are tender and broken right now.  But we can endure and survive.  Our prayers can strengthen the fabric of this nation and allow God to rebuild us and restore us.  As we pray, we need to repent, and confess our sins, and ask our Father in Heaven to redeem us and heal our land.  So, keep praying, and trust God to hear your prayers -- even if we see continued strife and hatred.  Just picture your prayers igniting His holy fire and destroying all the plans of the Enemy and his operatives; those in the heavenly realms and those here on earth.  And remember ... His Kingdom come, His will be done, on earth, as it is in heaven.

So, you may be wondering how to specifically pray to God and into the spiritual realms to defeat these strongholds that are trying to destroy our nation.  Stay tuned on Wednesday for suggested prayer, and let's partner with the hosts of heaven!

James 5:16    "Therefore, confess your sins to one another and pray for one another, so that you may be healed. The urgent request of a righteous person is very powerful in its effect."