A Match Made In Hell

Last week Breitbart.com reported that the Satanic Temple had launched a pro-abortion crusade to come to the aid of America’s largest abortion provider, Planned Parenthood.  That really doesn't come as any big surprise to me.  In the fall of last year, I wrote an article titled Is There A Connection Between Abortion and Satanism?  In the blog post I referenced the testimony of Zachary King, an imposing figure, and an ex-Satanist and former High Wizard of a satanic coven.  Mr. King gave a riveting account of his association with the occult and a "large abortion provider" in pushing satan’s agenda, including ritualistic abortions.
Mr. King, who is now an avowed follower of Jesus Christ, reported that, as a satanist, "when trying to get satan’s approval to give you something that you want, killing something (or someone) is the best way to go. Killing something is the ultimate offering to satan, and if you can kill an unborn, that is his ultimate goal." 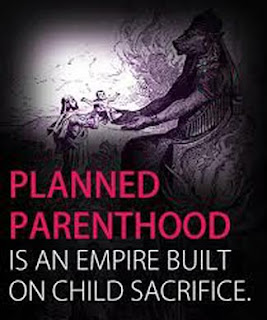 This kind of horrific child sacrifice is nothing new ... the Bible records the detestable practice among the Ammonites to their false god, Molech.  And satan's ability to seduce man to make such an abhorrent blood sacrifice has not been limited to ordinary lost men, such as Zachary King once was.  Israelite kings such as Solomon, Manassah, and Ahaz were persuaded to sacrifice children and do "evil in the eyes of the Lord".  Manassah and Ahaz even sacrificed their own sons!
It is so difficult for me to imagine the power behind the lie that satan whispers in a person's ear to convince them that this practice is acceptable or desirable.  What did Manassah, Ahaz, or Zachary King hear that told them it was alright to become part of a ritual in which a baby's blood is offered to the devil?  And how does satan convince Margaret Sanger, the founder and revered "mother" of Planned Parenthood (that's ironic, isn't it?) to  become involved in Rosicrucianism, a combination of occultism and mysticism, in which members believe they possess secret wisdom that was handed down to them from ancient times. (The same "wisdom" that Solomon, Manassah and Ahaz thought they received?).
I started this post by saying it doesn't surprise me that there is a modern link between the Satanic Temple and Planned Parenthood.  I think that link has been there from the beginning!  Sanger, who lost her five-year-old daughter to pneumonia, attempted to connect to her dead child through séances and occultic rituals.  Combined with her Gnostic spirituality and an extramarital affair with author H.G. Wells, the devil found, in Sanger, a useful servant to help continue his ritual of child sacrifice.  Her belief that it is human knowledge that enables the redemption of the spirit, not God; and his belief in Social Darwinism and racial dominance, provided the perfect merger for demonic reasoning.
When one disavows God, it opens up fertile ground for satan to put down roots.  The Enemy convinces men that they possess a mind that is capable of determining their own eternal destiny, and that Science can light the way to all the knowledge necessary to one's life.  Consider the early writings of H.G. Wells:  "Science is a match that man has just set alight. He thought he was in a room in moments of devotion; a temple, and that his light would be reflected and display walls inscribed with wonderful secrets and pillars carved with philosophical systems wrought in harmony. It is a curious sensation, now that the preliminary sputter is over and the flame burns up clear, to see his hands lit and just a glimpse of himself and the patch he stands on visible, and around him, in place of all that human comfort and beauty he had anticipated ... darkness still."  To me, this sounds like a man who was unable to see beyond his own existence, and to see a Light that shines in, and overcomes, that darkness.
Somehow, satan was able to infect Margaret Sanger with his darkness; an evil that would result in quotes like these:  "The most merciful thing that a family does to one of its infant members is to kill it";  and "We do not want word to go out that we want to exterminate the Negro population".  She believed in an American Baby Code which would result in selective births.  She believed in population control, sterilization, and social planning via quotas.  And perhaps worst of all, she would become an inspiration to another of satan's emissaries, Adolph Hitler, who was a student of Sanger's eugenics policies.
Together Planned Parenthood and the devil have made a diabolical duo.  Their legacy has led to satanic rituals in abortion clinics, such as described by Zachary King; to the selling of aborted baby  body parts for profit, as revealed in videos by the Center for Medical Progress; and to this video of a demonic exchange between an abortion doctor and a pro-life advocate.  The exchange occurs less than a minute into the video and shows the doctor growling and speaking in a clearly demonic voice, denouncing Christ and proclaiming his love of killing babies.  The devil isn't even trying to hide his influence over humans any longer.  But why should he?  As the Christian Church, we haven't done much to hinder his killing of over 1.4 billion babies worldwide since Roe v. Wade (over 59 million in the U.S. since 1972, and over 2,000 just today).  He can afford to put a display on before the cameras.  He has no need to hide his agenda or his partners in crime.
As I sit here, in utter despair for the grief that mankind's unrepentant actions have caused God, I give thanks for those mothers in my life who could have chosen to listen to the lies of satan, but instead walked in the Light of God and gave birth to the children who have graced my life and filled it with such joy and love.  Abortion is just one of the ways in which the devil fights his spiritual war against God's creation.   When the Bible says he came to kill, steal, and destroy, this is what it looks like.  And his battle wages on, more in the open than ever before, as the Satanic Temple joins forces with Planned Parenthood.  Perhaps they sense that Jesus, the Righteous Judge is coming soon, and this is their last stand.  As we wait on the Lord, let us renew our strength and be just as bold as the Enemy ... let us declare that Victory is ours, and his final defeat is near!