Why Is The Constitution Becoming Irrelevant?

We have heard this refrain for several decades now ... The Constitution has outlived its usefulness; it is a "living document" and therefore, its original intent is no longer significant.  It probably goes without saying that the political forces that are behind the "government machine" would like nothing better than to remove the one document that restricts their power.  They are not particularly fond of the opening words, "We the People", which clearly establishes that the government exists to serve the people, not the other way around.
One cannot argue with the historical context of the Constitution -- that it was written to protect the rights of citizens from a government that was either too weak or too powerful.  We must remember that even the idea of a Constitution "for the People" was a radical and new concept on the world stage.  Prior to the rebels who dared to stand up to King George III, no other nation of peoples had ever attempted self-rule.  The American Revolution was not simply a rebellion against the king of England, it was a rebellion against being ruled by kings in general. And once that war was won, it became very important to determine exactly what system would ensure that individual rights would be secured by the rule of law. 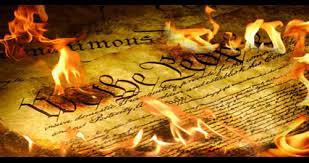 Our schools used to teach the U.S. Constitution as a matter of public education.  I can remember studying the seven different Articles, and how they affected the separation of powers and the checks and balances of Government.  We were tested on the Bill of Rights and the significance of the various Amendments; and how they were written to strengthen our individual rights and restrict any unlawful intrusion upon those rights by a tyrannical government.  That was then.
Today, we teach our kids that the Constitution is just a historical document; no longer relevant to a modern society.  I must admit that our leaders certainly act as if this is so.  Presidential Executive Orders specifically violate the Constitution; the Supreme Court redefines what constitutes a "tax" (clearly a violation of their Constitutional duties); and the Legislative Body regularly changes the method of voting on Bills, depending on which Party is in power.  It is conspicuously clear that their oath "to defend the Constitution" is insincere at best; and worthless as evidenced by their conduct.
While we can chalk up the diminishing relevancy of our Founding Document to the ravages of time and new concepts of society and government, there is one theory that we haven't considered, and I think it is perhaps the most insightful.
We have forgotten the passion that ideas like "Liberty" and "Personal Rights" and "Sacred Honor" could burn in the hearts of people who clung to a "firm reliance on the protection of Divine Providence", which by the way, in the lexicon of the times, meant "Jehovah God".  Those brave colonists who dared to stand up to the mightiest monarch and army in all the world -- who believed so strongly in their right to personal freedoms that came from their Creator -- knew that it was going to take a strong concept of government to guarantee those rights.  And they chose Leaders who understood the gravity and the foundation of those rights.
President John Adams warned: "Because we have no government armed with power capable of contending with human passions unbridled by morality and religion ... our Constitution was made only for a moral and religious people. It is wholly inadequate to the government of any other."
"Made only for a moral and religious people".  Can we still say we fit that description?  Can our leaders be described as "moral and religious"?  If there is even a moment of hesitancy in our answers, then we can see why the Constitution is no longer held in high regard by either the citizenry or elected officials.
Have we lost the truth that morality and faith in the Judeo-Christian God formed the bedrock of conventional thinking, society, and education at the founding of this country?  Modern secularists will deny that last statement, and proponents such as Susan Jacoby of the Center for Inquiry, have argued that America was established on reason and meant to be a secular republic, as seen with the First Amendment outlining a separation of church and state.
To be honest, I get tired of this distorted argument.  The First Amendment clearly states that "Congress shall make no law respecting an establishment of religion, or prohibiting the free exercise thereof...".  They were simply making it clear, within the context of the time they lived, that there would be no State Religion by which everyone was expected to worship.  They were responding to the history of the early colonists, many of whom had fled persecution and imprisonment and loss of property as a result of pursuing their desire to worship as they pleased.  This Amendment was designed to allow citizens to choose their own faith, and there is absolutely no evidence that the Constitution promotes a secular republic!
The importance of Biblical morality in colonial America is no more apparent than in the fact that Thomas Paine, who was certainly not a Christian, used the Bible extensively in arguing for the Revolution in his persuasive pamphlet, Common Sense.  The Bible, its moral principles and values; and most certainly, its underlying theme of freedom played an important role in determining the justification for the founding of America and its governing documents ... even by non-religious men.  Sadly, I do not see the same adherence today.
Whether we have totally lost that foundation remains to be seen.  The Constitution, which embodies the spirit of those moral cornerstones, is increasingly ignored and flouted.  Do we still have it in us to "rely on the protection of Divine Providence?"  And whether or not we agree that God played a direct part in the hearts and minds of those who established this country and our form of government, there can be no denial that He has brought about much good from the freedom that was won as a result.  The question before us is this:  Can we continue to succeed and prosper as a nation if that astounding Document of Individual Freedom and Liberty is shredded beyond recognition?   Do we realize that without it, the very structure of our government becomes null and void, and tyranny and dictatorship will fill that vacuum?   It may be an old, antique document, but it is neither archaic nor obsolete.  It stands between me and you, and a potentially cruel and oppressive government.  We better hang on to every scrap of it!