Have you seriously considered why in the world all the young girls across this nation seem to be enthralled with sharing photos of themselves sticking out their tongues?  Is your spirit pricked with an uneasiness that tells you there is more to this than just frivolity?  Well, I'm here to tell you there is.
I, like adults of every generation, have looked upon the entertainment industry as a possible instrument of the devil; a tool of temptation that will lead our youth astray.  When I was young, I laughed at my own parents' concerns, considering them to be out-of-touch and too old-fashioned.  Yet I can see where those suggestive lyrics and the loosening of sexual standards only served to encourage much of the debauchery in evidence today.  And I'm pretty sure that this generation feels the same way about our warnings as we did our parents.
But what they don't know is this … they didn't invent this viral social media rage of sticking out your tongue in every photo you post online.  Actually, it can be traced to the Hindu goddess, Kali.  Furthermore, they don't know that her identity can be traced back to the Queen of Heaven/Mother Goddess worship.  One of the foremost promoters of this worship, which honored Baal's consort, was the wicked Phoenician princess, Jezebel, who married the evil king of Israel, Ahab.
As I wrote in an earlier post, Jezebel influenced Ahab to fully establish Baal worship in his realm. In Phoenicia, Baalism included the worship of Molech with fiery sacrifices of children and the worship of Astarte, the Phoenician Ishtar, Queen of Heaven.  Jezebel caused altars to be erected to this idol in every part of Israel; and at one time four hundred priests attended the worship of Ishtar/Ashteroth.  She had such a powerful control over Ahab, that he built a temple to Baal, and the Bible records that he sinned against God more than any other king.  But here's the result of that idolatrous relationship:  The nation of Israel became so entangled with the Queen of Heaven/Mother Goddess worship that YHWH judged them by sending them into captivity by the hand of the Assyrians, and the nation of Israel was scattered to the ends of the earth.
And how did this Queen of Heaven/Mother Goddess express her immorality and debauchery?  By sticking out her tongue!  And today, our young girls and women mimic her, without even knowing what they are doing!  It seems that everywhere you look now on television and the Internet, the craze of sticking out the tongue is rampant.  And the media stars of this generation are leading the way. 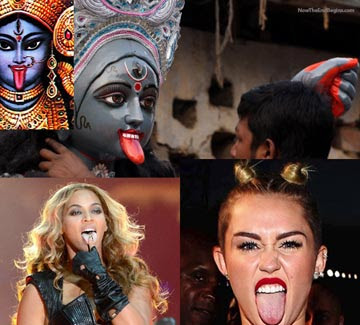 Psalm 12:3-4     "May the Lord cut off all flattering lips, the tongue that makes great boasts, those who say, 'With our tongue we will prevail, our lips are with us; who is master over us?' "
Posted by Pam Kohler at 7:00 AM