The Occult, Paganism & Witchcraft: The Temptation That Ensares Our Kids

If you are like me, I grew up loving to read.  And I was lucky enough to have an aunt who was an old-fashioned Librarian; that is to say, she was the caretaker of precious books which she screened for their educational, historical, and imaginative value.  As sad as it is, today's libraries often serve an agenda for non-profit organizations wishing to influence young minds in political and social principles.  But I received the benefit of her love of literature, as she introduced me to all the classic novels of the day, and so began my life-long pursuit of the written word.  And I will admit that the books I read as a child helped to instill values of honesty, courage, patriotism, compassion, and the love of adventure in my impressionable mind.
So it is today, with our youth and young adults.  Although they may choose to read on their iPads or phones, stories of written fantasy still occupy their minds.  But I'm afraid it is a much darker world in which their imaginations wander.  I actually am fearful of the influence such reading has on their malleable minds.
During my pre-teen years, I read classic books with moral values like Rebecca of Sunnybrook Farm, Little Women, and Little House on the Prairie.  As I grew older, I loved reading the works of James Fenimore Cooper, and wandered the forests with Natty Bumppo of the Leatherstocking Tales; and loved the star-crossed lovers in Jane Eyre and Wuthering Heights.  I know I'm showing my age, but I can't help but think those were healthier choices than what's being offered to young boys and girls today. 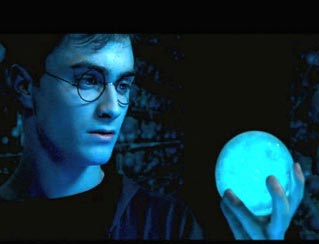 It's all about fantasy, and it is often dark and foreboding.  The advent of Harry Potter made a huge impact on children's literature, and normalized the idea of a school for Witchcraft and Wizardry, and introduced the struggle between magic versus non-magic people.  And countless Christian mothers bought the books for their kids and even read them, themselves.  The impact of J. K. Rowling's powerhouse can be measured by the fact that Harry Potter is the best-selling book series in history, and has been translated into seventy-three languages.  And once that portal was opened ....
We now have the highly popular Percy Jackson series with its stories of Camp Half Blood, the summer camp of demi-gods; and the attempt of the hero to reach the gates of the Underworld.  What a great way to "soft sell" and legitimize the return of the Nephilim!
As I perused the list of the most popular books for young teens (and which are being touted as follow-ups to Harry Potter), the titles caught my attention ... City of Bones, Magyk (Septimus Heap), The Amulet of Samarkand, Fablehaven, The Angel Experiment ... all involving some form of magic spells, supernatural powers, or other-worldly capabilities; and often inhabited with demons (both of the friendly sort, and those of the terrifying class). And who can forget the fascination and romantic spin of the Twilight series?  These vampire-themed fantasy romance novels became the rage among pre-teen girls, and none other than acclaimed author Stephen King called them "[a genre written] to a whole generation of girls, and opening up kind of a safe joining of love and sex.  It's exciting and it's thrilling and it's not particularly threatening because it's not overtly sexual."  Excuse me?!?  Does it bother anyone else that the series has been called "a gripping blend of romance and horror"; or that the author herself, Stephenie Meyer, says that the idea for Twilight came to her in a dream?  The dream was about a human girl, and a vampire who was in love with her but thirsted for her blood!  Did anyone even stop to think that there was a hint of the demonic surrounding this theme?  And who, or what, suggested this to the author in her dream?
Then there is a whole genre of which I was largely unfamiliar, so I was greatly surprised by the popularity of animé among young adults.  A form of Japanese computer animation, the themes range from sexually playful (ecchi) to "gratuitous titillation", known as "fan service".  Overall, this form of entertainment can be described as a blend of sexual fantasy and comedy, including sub genres of  magical girl, harem, sports, martial arts, literary adaptations, medievalism, and war.
So far, I have just barely scratched the surface of what is available for our youth!  The bottom line is this:  young adult fantasy has a basic menu replete with occult, witchcraft, Satanism, paganism, vampires, zombies, Greek mythology, and sexual themes.  And they are all being presented as mainstream and normal!  The truth is that the "dark arts" or "dark magic" has increasingly pervaded the subconscious of our youth through popular fiction and movies.  And right alongside them is the perpetuation of the religion of paganism, as evidenced by a whole genre of Wiccan/Pagan literature for young readers.  The agenda is clear.  With books like Isobel's Bird, in which three teenage girls learn what Wicca and Paganism is all about as they study to become real modern-day Witches; and Bell, Book and Murder, which is a mystery trilogy about a detective who happens to be Wiccan, one can see that pagan religions are being set forth as normal and acceptable.
While researching this topic, I only had to read a comment from an obvious pagan worshipper to see how dedicated the Enemy is to introducing false religion into our culture.  Here is the comment:  "You obviously do not know what Paganism is.  You confuse it with Hollywood BS.  Pagans value the worship of Nature and Ancestors. They follow the Wheel of The Year. They believe in Wyrd ... The Wheel of The Year is the core belief system. It follow life from birth to death, seasons, light to dark, male and female.  Wyrd, is the uncontrolled destiny; we accept that we are not truly in control of anything, we do not wish to dominate Nature, we are part of Nature, and we do not own Nature.
We respect family, we follow a main rule, "Do what you will, but do not harm others." The only form of Magick we practice is the one of Will.  We focus our will in order to influence Nature. Any form of technology that exist today comes from Will.  If you say it is magic, then people like you should outlaw it.  Also note the difference: Magick is not Magic. Magic is Hollywood BS."
It is quite apparent they take their religion seriously, and wish to promote their cause.  Read on:  "Pagans comes in three flavors: Fluffy, Genuine and Dark.  Fluffies are the misguided Pagans, or too new to Paganism to know exactly what it is. They include a lot of Hocus Pocus Hollywood BS. They are the ones giving Paganism a bad wrap.  Genuines are Pagans that are following the redes and beliefs of their faith. But they still cling to the ideas of dualism in some way, and have a dislike for dark and death, although they know it's part of the cycles of Nature and life.  Darks are Pagans that are exactly like Genuines except they accept the darkness and death as necessary.  Paganism comes also in an umbrella of paths: Wicca, Heathenry, Druidry... anything that does not follow the doctrine of Abrahamism. "
So, if you ever doubted that Paganism is a real religion, well, I'm guessing you now have a new understanding.  It is not an insubstantial movement, and it is encroaching upon our culture and the lives of our kids through entertainment and the internet.  They are being fed a steady diet of the occult and witchcraft, all under the guise of fantasy and romance.  Once again, I cannot stress my oft-repeated refrain enough ... Technology has become a willing and convenient tool of the Devil; and we must guard our children!

Acts 19:19    "And a number of those who had practiced magic arts brought their books together and burned them in the sight of all. And they counted the value of them and found it came to fifty thousand pieces of silver."