Do Not Think Your Life Is Insignificant!

As I look back over the years of my life, they are coming into clearer focus.  It's as if I can see my life on a linear timeline, and there are events that stand out; events that taken by themselves, look to be not worth much consideration and seem disconnected.  But as I find myself increasingly in opposition to the world's standards, or in situations where my faith and theology are at odds with my fellow Christians, then I am beginning to see a pattern...
There were all the times that I felt, as a child, that I just didn't quite belong to "the crowd".  I know that many of you have shared that same feeling and experience.  We moved a lot when I was in elementary school, and it's never been fun to be the "new kid".
There were small moments along that timeline that seemed bright and shiny; like the time I won an essay contest in 3rd grade for writing about John Glenn's orbit around the earth.  My paper was written on those big sheets of lined paper and hung for all the parents to see on Parents' Night.  I was too young to take the hint that this was a gift God had given me.
But more often than not, during those awkward elementary and junior high days, the timeline looked a little more dreary.  After a move from Utah to Illinois, I ran for Student Council five times during the 5th grade ... and lost each time!  At least no one could say I was a quitter, right?  I just held my head high and moved on.
And the move from a small country school to a metropolitan junior high was perhaps my least favorite time of adolescence.  I was at that awkward stage of development; 12-years-old, tall and gangly, and thrust in the midst of an 8th-grade class who had grown up together.  To say that I was the outsider is to put it mildly.  At the beginning of that school year, I woke up with a stomach ache each morning, dreading to go to school and feeling so isolated.  But by the end of that year, I had somehow found my own way and counted everyone from the school bully, to the "popular" kids, to the loners like me as my friends.  I guess I simply made up my mind that I would not give in to defeat.
The timeline during my high school years is highlighted by one particular event.  Once again, i was not among the popular clique at school, but yet as I look back, I was not excluded from their circle of friends.  I see myself during that time as associated with all the kids I went to school with, yet separate from them; kind of set apart and distant.  I will never forget one girl, who was way more experienced than I was in every aspect of life.  She told me that I was a "late bloomer"; that I would come into my own in college and find my way later in life.  So, even though I picture myself as kind of on the sidelines during those years, I found an old newspaper clipping in my mother's cedar chest after she passed away.  There was a photo of me, the undistinguished high school student in my conservative skirt and blouse, standing with a sign protesting some perceived wrong at the school.  If you knew me during those years, that doesn't really fit the profile. But a seed of boldness had taken root.
As we move along the timeline towards my college years, you will see me moving into roles of leadership.  I was voted by my fellow dorm mates to be an Advisor to incoming freshmen; then as a Resident Assistant in charge of an entire wing of girls, reporting to the head of Women's housing at the University of Texas.  I was paid my room and board as compensation and it was a job that I loved; mentoring young women and creating a cohesive atmosphere of mutual respect, while learning to relate to other girls of different races, social classes, and interests.  It was the beginning of a very satisfying part of my college career, and I loved the responsibility and the challenges.
Little did I know that I would soon face one of the biggest challenges of my young life up to that point.  It wasn't long before I got a taste of what it felt like to run up against "the establishment" of any organization or group.  The faculty and university leadership had their way of doing things and you followed their rules, without question, or you could suddenly find yourself on the outside of the "good ol boys" network; or in this case the "good ol' girls" of the Women's Housing Authority.
It all started with a simple University election for Student Body President.  The Housing Authority faculty member that was my boss made it quite clear that she expected everyone under her authority to vote for a particular candidate.  Well, that wasn't the way free elections worked, was it?  When I pushed back a little, I was quickly demoted in my position, called in and reprimanded, and told I needed to quit causing trouble if I expected to keep my job, which was essential for me to afford the cost of my next semester.  I was moved to a less prestigious area of the dorm, and put under different "management". 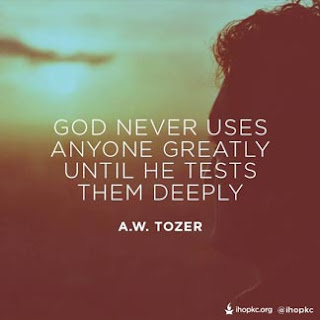 1 Peter 1:6-7     " In this you rejoice, though now for a little while, if necessary, you have been grieved by various trials, so that the tested genuineness of your faith—more precious than gold that perishes though it is tested by fire—may be found to result in praise and glory and honor at the revelation of Jesus Christ."