If you are reading my blog today, then at least I know you have kept an open mind to what I have to say.  And I pray that you will take what I present and continue in your own diligent research... because I think it is that important!  So, today, I want to present the opinions of Freemasons, in their own words, as to the origin of Freemasonry and how it correlates to Christianity.
First, a little history .... I would venture that few subjects are as enveloped in mystery and misunderstanding as Freemasonry.  For sure, no one can explain with certainty how or when the Masonic Fraternity was formed. A widely accepted theory among Masonic scholars is that it arose from the stonemasons' guilds during the Middle Ages. The language and symbols used in the fraternity's rituals come from this era.  Known under a variety of names (the Craft, the Brotherhood, the Order, the Fraternal Order, the Lodge, etc.), Masonry has been aligned with both the Christian church and the occult.  It can't be both, so which is it? 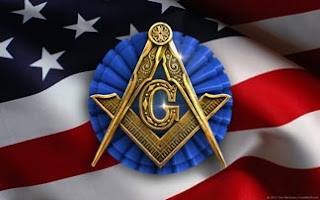 If you go to the website for the Masonic Service Association of North America's website, you will note that the emphasis is put on "service to the community", and because of all the controversy, they even post a statement on Freemasonry and Religion.  And they actually do a pretty good job of explaining away all the criticisms and condemnations that have been lodged against the secret society.  If, as a Christian, one is willing to water down God's commandments as to how He wishes to be worshipped, I suppose you could rationalize becoming a Mason.
That being said, there was a period in time in America where the Christian influence in Masonic lodges held sway.  In his book titled, The History of Freemasonry; It's Legendary Origins, Albert Mackey writes that in the 18th and 19th centuries, such leaders as Rev. James Anderson, William J. Hughan, William Hutchinson, Rev. George Oliver, and others had a Christian view of their Craft. Hutchinson, in particular, noted that Jesus Christ was the example for the Master Mason. He stated, "The Master Mason represents a man under the Christian doctrine saved from the grave of iniquity and raised to the faith of salvation. As the great testimonial that we are risen from the state of corruption, we bear the emblem of the Holy Trinity as the insignia of our vows and of the origin of the Master's order."
But in the early 19th century, there were a series of incidents that cast a negative light on "the Brotherhood", most notably what would become known as "the Morgan affair".  This resulted in a mass exodus of Christians from Masonic lodges across the nation.  And is it really surprising that when Christian influence vacates a situation, that Satan is waiting in the wings to fill that void?  That's exactly what happened.  During this time Albert Pike seized the opportunity to spread and entrench his pagan interpretation of the Craft, and along with others, Pike began to reinterpret the symbols of the Craft.
What I find interesting is that while Pike is paganizing Freemasonry in the mid-19th century, there is simultaneously a new influx of Christians into the Fraternal Order.  Can you see the cosmic chess match between YHWH and the devil?  However, the Christian influence wasn't enough to fight off the pagan domination.  Manly P. Hall, a 33rd degree Mason, was one of the early authors who claimed a pagan origin for Freemasonry. In his book entitled The Lost Keys of Freemasonry, he says that Freemasonry is not a material thing: it is a universal expression of the Divine Wisdom. "The Masonic order is not a mere social organization, but is composed of all those who have banded themselves together to learn and apply the principles of mysticism and the occult rites."  With book titles such as The Secret Teachings of all Ages, The Secret Destiny of America, and Freemasonry of the Ancient Egyptians, you should be getting a clearer picture of the occultic mysticism that surrounds this organization.
The religious cornerstone for the Brotherhood became "universalism".  The primary standard for membership was, and continues to be, that the candidate believe in "God." This god could be Krishna, Buddha, Allah, or any other god, but Jesus Christ is not to be considered anything more than their equal.  This universalist, or inclusive, idea about God has opened the door for every false deity to have a place within the Lodge. Hall makes his universalist orientation unmistakable by stating, "The true disciple of Masonry has given up forever the worship of personalities. With his greater insight, he realizes that all forms . . . are of no importance to him compared to the life which is evolving within." (My emphasis). 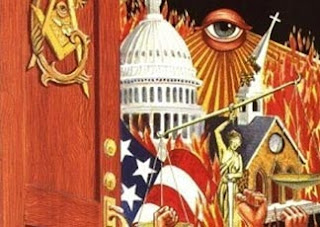 That statement alone tells me that the worship of the One True God and the reverence for His character (or "personality" to put it in Masonic lingo) is replaced by the worship of self, or becoming your own god.  Sounds like the same message that was delivered in the Garden, doesn't it?
Hall adds to his belief in universalism by stating that "the true Mason is not creed-bound. He realizes with the divine illumination of his lodge that as a Mason his religion must be universal: Christ, Buddha, or Mohammed, the name means little, for he recognizes only the light and not the bearer." So, for the Mason, God is not a personal being, but an impersonal force, an energy that has no substance.  And if one only recognizes the light, and not the bearer, that bearer could be any false god or demonic spirit posing as the light.  So, I simply must ask the question that should be on everyone's mind .... how can a Christian remain a Mason?
But believe me, the tradition and the subterfuge within Freemasonry is strong enough to delude many a Christian.  Here are a couple of testimonies from a website called Ex-Masons for Jesus.  I urge you to visit the site and read poignant declarations of men and women who came out of the darkness and into the real light, Jesus Christ.  Here are some snippets from their testimonies:
•  "The Grand Master informed me that one of my duties as a Worshipful Master of my Lodge was not to offend any brethren who were not Christians, even if this meant I had to refrain from using the name of Jesus Christ in my prayers. He advised me that as Grand Master he had the authority to disband my Lodge and remove its Charter as a Lodge, if I persisted in using the name of Jesus with members present who objected ... In the center of every Blue Lodge is an altar. Resting on top of the altar is what many Masons refer to as the Great Light of Masonry, the Bible. I later discovered that Freemasonry declares the sacred book of any and all religions in the world equivalent to the Bible. Any "sacred book" may rest on the altar in a Masonic Lodge, to oblige a Mason who does not accept the Bible as God's word ... After reading and studying various Masonic authors, I realized that Freemasonry considers Jesus Christ as no greater than Moses, Elijah, Mohammed, or Buddha"  (Jack Harris).
•  "I didn’t know anything about the Masons at that time. I knew I had been intrigued at one time, in younger years, by things of the supernatural and New Age, and had renounced that. I didn’t really know anything about the Masons except what I was hearing from my husband, which was very little. He took his oaths to the Lodge very seriously, and didn’t disclose any secrets. To him, that oath, I believe, was more sacred than the vows we had made.  He wanted me to join the Eastern Star. I still didn’t know anything about it; I didn’t feel right about it. I felt a check in my spirit. But, he felt that this would help us as a family, and help in our relationship, so I agreed to go ... As I entered that place, there was such a feeling of oppression. I felt that I could hardly breathe. The spirit of fear came over me so strongly, it was such a place of darkness, and I just prayed, “God, if You get me out of here, I promise You I’ll never be back.” After we left, I told Tom that I could not go back there." (Kay Hilton).
•  "I started each of the three degrees of Masonry with my eyes blindfolded. I discovered some time later that I had been spiritually blindfolded as well ... Every prayer offered in lodge, and even in open funeral services, is closed with the invocation, “So Mote It Be.”. I had never heard any such thing when prayers were offered in any other organization or setting. With the advantage now of Internet searches, it is easy to learn that beyond Masonic references, one can find the phrase in common usage in witchcraft and other similar secret bodies."  (Now you know the origin of that phrase that I used in yesterday's post) ... "A new Mason has to acknowledge before entering the lodge room – that he is “in darkness” and is seeking true light in Masonry."  What was that again?  "The true light" in Masonry?  Seems to me if you are a Christian, the True Light is Jesus!  So, once again, I ask... how can a true Christian remain a Mason?
I could continue with testimonies and evidence, but I hope by now I have provided enough to encourage you to become knowledgeable about Freemasonry; to pray about it and seek guidance and counsel from the Holy Spirit.  Sadly, it is not enough to seek counsel from your Church leaders, many of whom have not done their own due diligence.  Take for example this 1993 Report on Freemasonry, from the Southern Baptist Convention:


"In light of the fact that many tenets and teachings of Freemasonry are not compatible with Christianity and Southern Baptist doctrine, while others are compatible with Christianity and Southern Baptist doctrine, we therefore recommend that consistent with our denomination's deep convictions regarding the priesthood of the believer and the autonomy of the local church, membership in a Masonic Order be a matter of personal conscience. Therefore, we exhort Southern Baptists to prayerfully and carefully evaluate Freemasonry in the light of the Lordship of Christ, the teachings of the Scripture, and the findings of this report, as led by the Holy Spirit of God."

Think that fits the description of the "lukewarm" Church of Laodicea?  I do!  If any tenants and teachings are incompatible with Christ, why would you not denounce Freemasonry for Christians?  Once again compromise wins out, and Jesus is devalued.  But that's the way the devil works, isn't it?  He weasels his way into being accepted as "almost" like God and offers us the tempting titles of leadership and good standing in our community.  So, prideful Christians look the other way, and remain loyal to the Lodge.  In the next post, I will show you how Freemasonry has left the Lodge and entered the Church.  Stay tuned!

2 Corinthians 6:14   "Do not be unequally yoked with unbelievers [do not make mismated alliances with them or come under a different yoke with them, inconsistent with your faith]. For what partnership have right living and right standing with God with iniquity and lawlessness? Or how can light have fellowship with darkness?"