We are in the midst of an aggressive and strife-filled political season.  I think we all agree that there are many issues that will effect the future of not only this nation, but the world.  And the varying views by candidates of both parties deserve careful consideration.
We have received an earful on the subjects of immigration, the Supreme Court, our economy, national security, etc.  An underlying, yet no less significant topic is the conflict between Christianity and the Islamic faith, as evidenced in the angry and bitter disagreement over fundamental issues of faith.  Whether we realize it or not, these differences foretell a national struggle that is becoming increasingly inevitable.
It is also starting to become an issue between leading candidates Donald Trump and Hillary Clinton, and could very well become a focal point of this Presidential election.  At the heart of this issue is the question, Can a faithful Muslim be expected to be a good American citizen? 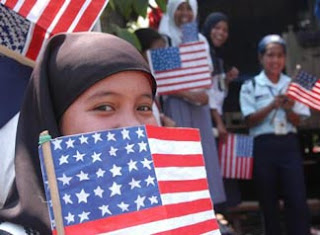 There are those who will point out that this question has been asked of every new ethnic group who gained a foothold in the American experience ... from the Irish, to the freed slaves, to the Japanese, to Mexicans; the Muslims are just the latest minority to be assimilated into the melting pot that is America.  But is it really that simple?  Because I don't recall a radicalized faith among those other diverse groups that called for the annihilation of Christians, or "infidels".
I guess you could argue that it depends on how fundamental any particular citizen is in his Islamic faith.  I know that there are many Muslims who will say, "I believe in Jesus (Isa). The Koran says he was a true teacher, a great prophet, and a good man."  In fact, there are many non-Christians who would say the same thing.  But I would like to ask them all (both Muslim and secularists), "How can you say He was a true teacher, yet deny what He taught when He said, "I am the way, and the truth, and the life. No one comes to the Father except through me."  And how can you believe that He was a great prophet, yet deny the prophecy He gave about His own death and resurrection?  And I imagine that it might be a tad difficult to believe that He was a good man, and the Son of God, both at the same time.  So, how would a faithful Muslim be able to follow the laws of a nation that are based on the principles taught by Jesus -- a teacher, prophet, and man with whom you disagree on His identity as the One True God; on his resurrection; and on His Deity.  Isn't their a fundamental conflict according to the tenets of your faith?
In that vein, I would sincerely like someone of the Islamic faith to explain how they reconcile the principles and directives of their faith with compliance to the laws and culture of this nation.  Because I know that the First Pillar of Islam is to sincerely recite the Muslim profession of faith ... "There is no god but God (Allah), and Muhammad is his prophet." This is the basis for a Muslim's allegiance to Islam, which has social, political, intellectual, philosophical, and spiritual ramifications -- just as it does for Christians.
Can you be a faithful Muslim and a good American if the mullah at your mosque preaches against allegiance to this country; or calls for destruction and devastation against this nation?  Can you be a faithful Muslim and a good American if you believe the Bible is corrupt, and the Constitution is based on its principles?  Can you be a faithful Muslim and a good American if spiritually, you bow down to a different god?  Can you be a faithful Muslim and a good American if you follow the Hadith, a collection of traditions containing sayings of the prophet Muhammad that, with accounts of his daily practice (the Sunna), constitute the major source of guidance for Muslims apart from the Koran?  What do you do when the Hadith is in conflict with American laws?  Which takes priority in your life, and is there really room for compromise?
Ah, that word compromise .... It seems that the Enemy has found a way to work that into something as incompatible as Islam and Christianity.  And I will let the Rev. Ann Holmes Redding, who graduated from Brown University, earned master's degrees from two seminaries, and received her Ph.D. in New Testament from Union Theological Seminary in New York City, tell you how she believes you can have it all.
"In the fall of 2005, a Muslim leader gave a talk at St. Mark's Cathedral where I worked. I was moved by his prayer. During the spring of 2006, another Muslim leader taught a chanted prayer to God at a cathedral's inter-faith class."  She began reciting the prayer daily. She began to study Islam intensely and in March of 2006, she became a Muslim by reciting the shahada -- "There is no god but God (Allah), and Muhammad is his prophet." [The First Pillar of Islam]. She said, "Coming to Islam was like coming into a family with whom I'd been estranged. We have not only the same God, but the same ancestor with Abraham... I am both Muslim and Christian, just like I'm both an American of African descent and a woman. I'm 100 percent both."
And here we encounter another of the Enemy's lies .... inclusion.  But why should we be surprised by this tactic?  Even the Vatican's Catechism states, "The plan of salvation also includes those who acknowledge the Creator, in the first place amongst whom are the Muslims; these profess to hold the faith of Abraham, and together with us they adore the one, merciful God, mankind's judge on the last day."  If you have picked yourself up off the floor, then consider how the Vatican justifies this position.  They write, "...  Basing itself on Scripture and Tradition, the Council teaches that the Church, a pilgrim now on earth, is necessary for salvation: the one Christ is the mediator and the way of salvation; he is present to us in his body which is the Church... This affirmation is not aimed at those who, through no fault of their own, do not know Christ and his Church [my emphasis]: Those who, through no fault of their own, do not know the Gospel of Christ or his Church, but who nevertheless seek God with a sincere heart, and, moved by grace, try in their actions to do his will as they know it through the dictates of their conscience - those too may achieve eternal salvation."
Do you see inclusion here?  According to the Catholic Catechism, Muslims, Jews, Buddhists, etc. will be saved despite their rejection of Jesus Christ as the Savior!  Is it any wonder that there is so much confusion and compromise?  Sadly, there are a number of theologians who find no error in the Rev. Redding's position.  They say it is all "a matter of interpretation" ... she just has a somewhat different definition of what it means to be a Christian.  Really?!?  So, the natural conclusion to that supposition is that a home-grown radical Islamist just has a different interpretation of what it means to be an American, right?
Other theologians see Rev. Redding as "a bridge" between the faiths, something they say is desperately needed.  But I would ask you to recall the fate of the Old Testament nation of Israel every time it tried to build a bridge with nations who followed after other gods.  One of the most pronounced examples in the Bible is the reign of King Jehoshaphat.  He was certainly a godly man. He sought the Lord and walked in His commandments. He took great pride in the ways of the Lord and removed idols from the land. He sent out teachers to instruct the people in God’s law. When a prophet rebuked him for his wrongful alliance with Ahab, unlike his father, Jehoshaphat accepted it and went on to institute further religious reforms. In chapter 20 we see his heart as the nation is threatened by a vast army, and he calls the people to prayer and fasting. Jehoshaphat’s prayer before the assembly reveals his humble trust in the Lord.
But King Jehoshaphat was not exempt from the temptation to compromise with the world.  As Bible.org points out, during his alliance with Ahab, he allowed Ahab to finagle getting his daughter married to Jehoshaphat’s son. The next thing we hear is Jehoshaphat promising the godless Ahab, “I am as you are, and my people as your people, and we will be with you in the battle”! Incredible! It’s as if a boxer has trained for the big fight and his opponent invites him out for dinner and slips poison into his coffee.
As Christians, we must be on guard against becoming entangled in wrong relationships -- wrong political relationships, wrong social/cultural relationships, and wrong spiritual relationships.  Yes, we are to love our fellow man, but "love" that compromises Biblical truth will lead to unhealthy alliances.  We can have mutual respect and treat others with humility and kindness, but never abandon God's Truth, as we know it and practice it.  And seeking "politically correctness" in a spirit of compromise will only result in concessions to our Biblical principles and a lowering of God's standards of obedience.
I began this blog post talking about the divisive issues that face this nation on the eve of a very important election, and what I discern is a growing conflict between faiths that is prophesied in the Bible.  We are living in a time of great confusion, compromise, and chaos.  I believe it is important, now more than ever, to fix our attention on God; to come into submission to Him -- in our personal lives, in our public lives, and in the ways we relate to this godless culture, without being conformed to it, or transformed by it.  God wants unity among the peoples of the world, but that unity must be centered on faith in Christ.  If unity comes at the sake of His Truth, then destruction will be inescapable.

Ephesians 2:2   "In which you once walked, following the course of this world, following the prince of the power of the air, the spirit that is now at work in the sons of disobedience—"