Coming Soon To NYC: The Temple of Baal!


In July of last year, I wrote a blog post about an ISIS video showing the horrific executions taking place in the ancient city of Palmyra in the Syrian desert.  I wrote that the choice of this site by the barbarians was no accident.  Palmyra was an ancient Roman city cited as a UNESCO World Heritage Site, and noted for its prolific Baal worship throughout ancient history.
The website GotQuestions.org has done a terrific job of telling us who Baal was... Baal was the name of the supreme god worshipped in ancient Canaan and Phoenicia. The word baal means “lord”; the plural is baalim. In general, Baal was a fertility god who was believed to enable the earth to produce crops and people to produce children. Different regions worshiped Baal in different ways, and Baal proved to be a highly adaptable god.
According to Canaan mythology, Baal was the son of El, the chief god, and Asherah (also known as Astarte and Ashtaroth), the goddess of the sea, and Baal was considered the most powerful of all gods.  We Christians are familiar with the land of Canaan as being "the promised land"; where YHWH had promised the Israelites under Moses that they would live in peace in a “land flowing with milk and honey.”  Today, the land of Canaan corresponds roughly to present-day Lebanon, Syria, Jordan and Israel.
But, if you are familiar with the Bible, you will recall that even before the Hebrews entered the Promised Land, the Lord God warned against worshiping Canaan’s gods, but Israel turned to idolatry anyway.  The Books of Kings, Chronicles and Judges are full of stories of Baal worship in Israel; at the Temples of Baal and around Asherah poles; involving child sacrifice, rooted in sensuality, and involving ritualistic prostitution in the temples.
About now, you might be thinking that this is all ancient history.  What does it have to do with today, and why should we be concerned about the worship of false gods in ancient temples?  Well, next month has been deemed World Heritage Month by The United Nations Educational, Scientific and Cultural Organization (UNESCO).  And because of the bombings of the ancient temple ruins by ISIS in Palmyra, reproductions of the nearly 50-foot arch that stood at the Temple of Baal in Palmyra, Syria will be erected in New York City and London next month.  And they are just the first of many to be erected around the world! 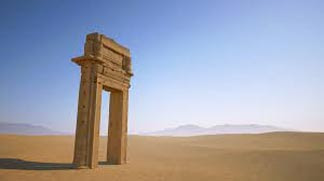 You will hear the deceptive rationale that these monuments are intended “as a gesture of defiance“ towards ISIS (rebuilding what has been destroyed), but ultimately the plan is to share this “cultural treasure” with as many cities around the planet as possible.  In fact, the Institute for Digital Archaeology ultimately hopes to put 1,000 of these arches in cities all over the globe.
Why is this so disturbing to me?  I'll let Scott Brown of the National Center for Family-Integrated Churches (NCFIC -- an organization that proclaims the sufficiency of scripture for church and family life) explain it:

We know that there were usually lots of people gathered, often on a high hill (like a theatre or stadium) to observe public sex, just like we see in movies and television and on the internet. We think that our watching these things is different than the idolatry of old, but this is not so.

The whole community came out and all of the best pagan ideas for success in crops and fertility were promoted, just like a business seminar that promotes unbiblical ideas that justify the worldliness of its origin.

The wicked personalities (promoters and performers) were respected and given the platform (like rock stars and Hollywood’s “People’.) Some of them were great dancers (like Brittany Spears and Madonna) while others were great musicians (like Mick Jagger and Paul McCartney). In our day, people who go to our churches celebrate celebrities when they should be doing the opposite. Psalm 101:1, 3 says “I will walk in my house… I will set no wicked thing before my eyes…”

People danced around the Asherah pole, which was nothing more than a phallic symbol. It is quite possible that these poles functioned somewhat like the poles in what are called, “gentlemen’s clubs.” The people also acted out lustful, licentious, bawdy scenes for the enjoyment of all who came.  They had all the different kinds of sexual experiences on display including men with women, men with men and all of the combinations that are popular today in sit-coms, movies and news reports. On top of that, they invited the crowd to participate.

And sadly, we are no different than the ancient Baal worshippers.  We have become a society that is addicted to watching other people have sex.  In fact, it has been estimated that 68 percent of all Christian men watch pornography on a regular basis.  How are we any different than the ancient kings of Israel and Judah who forsake God to follow after the flesh in Baal worship?  And now we want to bring a giant production of Baal's Temple into Times Square. 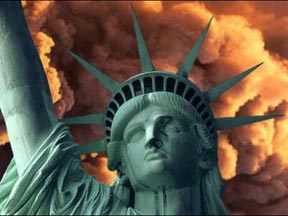 I'm sure you have heard America called the modern day Babylon.  I have to admit that it is difficult to deny that charge when we are putting up a monument of worship to the false god Baal.  Soon, in the heart of one of our most important cities, there will sit a temple, that in ancient times, gave witness to child sacrifices and bisexual orgies at the altar of Baal.
We can deny that's what we're doing all we want.  But our modern day practices of child sacrifice  (abortion) and sexual immorality (everything from pornography to transgenderism, and everything in-between) give testimony to the fact that our core actions and social philosophies remain eerily similar to ancient Babylon and the worship of Baal. The question now becomes this ... are we able to be restored to a righteous nation, and reject this idol worship, and destroy all the altars we've erected to selfishness and sexuality?  Ancient Israel had moments of clarity and humbleness, but most of the time they only partially destroyed their idols; preferring to think they could appease God with a half-hearted act of humility and submissiveness.   But make no mistake --- just as He warned over 33 centuries ago, when the Israelites were tempted by Baal worship, He will not accept our feeble and cursory offers of obedience.  He wants us all in ... or we will pay the consequences.
So, when you see the life-size model of the original 2,000-year-old structure, known as the Arch of the Temple of Bel, which will stand approximately 48 feet high and 23 feet wide, know that this nation may very well have committed our greatest offense to the Sovereign Lord.  And if you want to know what to expect from this profane act, just read a few chapters in 2 Kings ... you'll get the idea of what's in our future.

Judges 2:13-15     "They abandoned the Lord and served the Baals and the Ashtaroth.  So the anger of the Lord was kindled against Israel, and he gave them over to plunderers, who plundered them. And he sold them into the hand of their surrounding enemies, so that they could no longer withstand their enemies.  Whenever they marched out, the hand of the Lord was against them for harm, as the Lord had warned, and as the Lord had sworn to them. And they were in terrible distress."