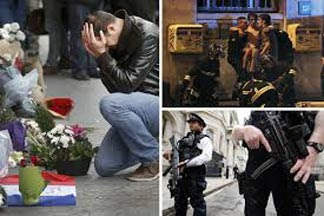 I am really getting tired of all the semantics and political correctness that surrounds the present chaos in the world.  In an attempt to offend no one, political leaders in Europe and the West have bent over backwards to be "inclusive" to foreigners -- without securing the safety and well-being of their own citizens.  We have seen the results ... the November 13th attacks in Paris, which claimed 130 lives; 10 months after attacks on the satirical newspaper Charlie Hebdo and a Jewish supermarket left 17 dead. And now there are at least 30 more dead, and hundreds injured in Brussels, the capital of Belgium.  These latest attacks are seen as a direct hit at the heart of Europe.
Here in the U.S., politicians are afraid to link murders to the religion of Islam.  Presidential candidate Hillary Clinton says she prefers to call such incidents "radical jihadist terrorism" rather than evoking the common characteristic, which is the Muslim faith.  She says it would be “dangerous” because it would imply we are at war with an entire religion.
But what do you call it when you consider the following statistics:
•  14 dead, 17 injured in San Bernardino, CA when a 'very religious' Muslim shoots up a Christmas party with his wife. (12/2015)
•  5 Dead, 2 injured in Chattanooga, TN when a 'devout Muslim' stages a suicide attack on a recruiting center at a strip mall and a naval center. (7/2015)
•  A 74-year old man is shot several times in the head by a 'radicalized' ISIS supporter in Morgantown, NC (12/2014).
•  A Sharia advocate beheads a woman in Moore, OK, after calling for Islamic terror and posting an Islamist beheading photo (9/2014).
•  A 19-year-old college student in West Orange, NJ, is shot to death 'in revenge' for Muslim deaths overseas (6?2014).
•  Two homosexuals are murdered in Seattle, WA, by an Islamic extremist (6/2014).
•  A Muslim man in Port Bolivar, TX, shoots his lesbian daughter and her lover to death and leaves a copy of the Quran open to a page condemning homosexuality (6/2014).
•  A convert "on a mission from Allah" stabs a store clerk to death in Richmond, CA (8/2013).
•  Foreign-born Muslims describing themselves as 'very religious' detonate two bombs packed with ball bearings at the Boston Marathon, killing three people and injuring over 260 more; causing several to lose limbs (4/2013)
•  A Muslim convert in Ashtabulah, OH, walks into a church service with a Quran and guns down his Christian father while praising Allah (3/2013).
•  A Muslim in Buena Vista, NJ, targets and beheads two Christian Coptic immigrants (2/2013).
•  A 30-year-old Christian convert in Houston, TX, is shot to death by a devout Muslim for helping to convert his daughter (1/2013).
•  Three Jewish men in Waltham, MA, have their throats slashed by Muslim terrorists (9/11/2011).
•  Nidal Hasan, a Muslim psychiatrist guns down thirteen unarmed soldiers, and injures 31 others, while yelling praises to Allah (11/2009).
•  Muslim snipers kill three men and two women in separate attacks over a 15-hour period in Montgomery County, MD (10/2002).
•  2,976 people are killed by radical Islamists in the World Trade Center, at the Pentagon, and in Shanksville, PA, on 9/11/2001. Over 300 more were seriously injured.
•  Islamic terrorists detonate a massive truck bomb under the World Trade Center, killing six people and injuring over 1,000 in an effort to collapse the towers (2/1993).
•  And statistics go all the way back to 1972 when 10 members of a local mosque phone in a false alarm and then ambush responding officers, killing one, and injuring three.
Believe me, these are not all of the statistics.  There are numerous cases where a single person was killed in a variety of isolated incidents; but all by Muslim converts, sympathizers, or self-declared jihadists.  Are these all the murders committed in the U.S. between 1972 and 2016?  Of course not!  The point of this enumeration is to show a pattern; a growing pattern of hatred and hostilities and bloodshed and attacks and atrocities on innocent victims.  And that, my friends, is just one of the definitions of war.
When someone declares "war" upon 80 nations, as ISIS did in a November, 2015 video, then I submit to you that ignoring that declaration, or refusing to admit the intentions, is seen as weak by our enemy.  By refusing to recognize that the Islamic faith is a driving force behind the increasing attacks around the globe is to deny the obviousness of this statement in that same video:  “This is the source of our glory: our obedience to our lord. We are uncompromising in our call to Tawhid [Islamic monotheism]. We only call to Allah, unlike the countless deviant factions raising their false banners."
How can leaders in Europe and the West continue to deny that there are Islamists who have made it their goal to force obedience to their god?  We can argue from here to Kingdom Come (and how I wish it would!) whether these are "radical" factions or not.  The Truth is that in a world filled with evil people, sometimes war is necessary to prevent even greater evil.  Trying to deny the perpetrators of evil, only allows the evil to grow. 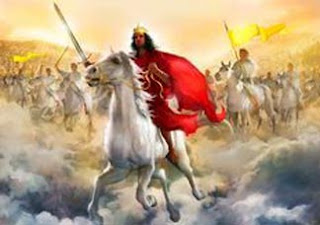 War is never a good thing, but sometimes it is a necessary thing.  In a world filled with sinful people, war is inevitable.  Sometimes the only way to keep sinful people from doing great harm to the innocent is by going to war.  We saw war as a necessary reaction to the atrocities of Nazi Germany. We are seeing war as a distinct possibility in response to the increasing attacks by ISIS.  And we will most assuredly see Jesus go to war against Evil upon His Second Coming.  This war will be the ultimate war on the earth, as Christ returns as the conquering commander who judges and makes war “with His justice”.  Because no matter what others might think, I do not believe He is a pacifist.  That label is reserved for a person who believes that war and violence are unjustifiable.  But Jesus, Himself, will come as a Majestic Judge, powerful in His holiness, and coming in wrath to judge all the living and the dead.  His will be a war against Evil and wickedness upon the earth, and He will be a Conqueror King.
So, as the forces of Evil mount their attacks in Europe and the West, we must at least be honest in our assessment of them.  We cannot appease wickedness, nor should we call it by any other name.  It's time to defend ourselves and defeat the Enemy as best we can.  And that means with physical weapons of war as well as spiritual ones.  We need to realize that the enemy we face has a powerful force of evil behind it, and we will only win by calling on the Power of the Lord.  After witnessing this latest terror attack, I am seeking shelter in the shadow of the Almighty, and am eagerly awaiting His terrible swift sword of righteous judgment.  Come soon, Lord Jesus!

Revelation 19:11    "Then I saw heaven opened, and there was a white horse. Its rider is called Faithful and True, and He judges and makes war in righteousness."
Posted by Pam Kohler at 7:00 AM

Email ThisBlogThis!Share to TwitterShare to FacebookShare to Pinterest
Labels: War