It was a packed house.  The line was out the door and it was standing room only.  The people had come to hear and to be heard.  And unlike past years, I wanted to be a part of it.  The occasion was a Meet The Candidates forum for local elections, and in three of our most important offices.  Men running for District Judge, District Attorney and County Sheriff came to present their qualifications and why they deserved our vote.
Before you dismiss this post as uninteresting and boring, let me tell you why I wanted to share my experience.  As do many of you, I believe this year's election cycle is the most important one in my lifetime, and if all the dire predictions and prophecies we are hearing turn out to be true, it may very well be the last election we ever participate in.  So, this subject matters!
You could feel the anticipation in that room, and I wondered how many people felt the same as I did ... knowing that these particular offices will profoundly affect our lives in the near future.  I might have been inclined to dismiss the candidates for District Judge, until one of them pointed out that District Judges have more power over our lives than any other elected office.  They have the ability, by law, to take your property, send you to jail, take your children away from you, grant you a divorce,  and have jurisdiction over many other civil matters in a citizen's life.  How they view the law, and your rights, will have far-reaching consequences if this country slides further towards government tyranny.  Just ask the ranchers in Texas's 13th District, who are fighting the Bureau of Land Management (BLM) over property rights.  The question of property rights is destined to become a hot-button issue, as the UN is getting increasingly involved in this area. 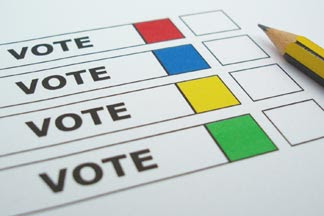 Deuteronomy 1:13   "Choose for your tribes wise, understanding, and experienced men, and I will appoint them as your heads."
Posted by Pam Kohler at 7:47 AM