As Soviet troops approached the Nazi prison camp at Auschwitz in January 1945, most of its population was evacuated and sent on a death march. The prisoners remaining at the camp were liberated 71 years ago today, on January 27, 1945, a day now commemorated as International Holocaust Remembrance Day.
And this next Saturday will mark 83 years since Adolph Hitler was appointed Chancellor of Germany and the supposed one thousand year Reich had begun.  It has been nearly a century, yet the evil perpetrated by this satan-influenced monster is still present in the world. 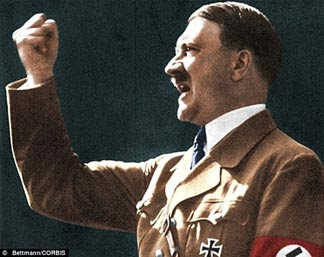 Although world history will tell us that Hitler was defeated shortly after the liberation of Auschwitz, his legacy, and the evil that it embodies, still lives on.  Those who personally lived through the nightmare and horrors are fewer in number, and their voices will soon be in the past, while the interest in Hitler among the younger generation is growing --- especially in light of the migrant refugee problem in Europe, accompanied by civil unrest and economic hardship.
In fact, two years ago, Britain's Daily Mail reported, "Hitler’s ideology — and some of his methods — have new adherents."  Due to the financial upheaval over the Euro, economic hardship was exploited by Far-Right groups with neo-Nazi ideals, such as the Golden Dawn movement in Greece, and now the "Nationalist Settlers" movement in rural Germany.  The movement in Greece is admittedly fascist, and it is not just aimed at Jews, but illegal immigrants.  The Nationalist Settlers have adopted an ideology that returns not only to traditional dress and values, but according to those who have researched them, they believe wholeheartedly in the whole Nazi racist superman garbage and are worming their way into local positions of power as councillors, volunteer firemen, teachers and festival organizers.
The world is also seeing a rise in anti-semitism in both Germany and France, and Jews are openly fearing persecution, and greater numbers are leaving Europe every year.  And then there is the report about Jamal, 80 miles northeast from Berlin, where every home except one is owned by a neo-Nazi.  Knut Jahn, who lives in the village of Jamal, said, "They hold pagan festivals around bonfires, sing songs banned since the fall of the Third Reich and cluster around a signpost that informs the visitor just how far away Braunau-am-Inn is; the Austrian birthplace of their beloved Adolf Hitler."
Mr. Jahn expressed fear over the spread of this evil ideology throughout the small villages and hamburgs of Germany, because the far-right tries to indoctrinate children as young as five into Hitler worshipping.  But it's not only Germany that is seeing the return of Hitler-lovers.  A group of neo-Nazis shocked passersby in Newcastle, northern England, with an impromptu rally featuring a banner with the words "Hitler was right" in front of a picture of the Nazi dictator's face.
Israel National News reported that some 20 activists from the far-right "National Action" group staged the Nazi flash mob, and the group assembled in front of a World War Two monument in the city center, and proceeded to give Nazi salutes and chant racist slogans, as stunned passersby looked on. They held a large banner with the words "Refugees not welcome, Hitler was right," in an apparent attempt to capitalize on anti-immigrant sentiment triggered by a much-criticized open-door policy elsewhere in Europe. 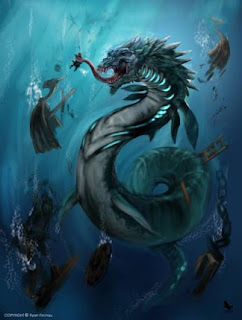 Right now we see Europe as a continent in chaos, and here are some interesting facts you may not be aware of... that word chaos is associated with Leviathan of the Bible.  In fact, the Leviathan of the Middle Ages was personified by John Milton in Paradise Lost as an image of Satan, endangering both God's creatures (by being embodied as a serpent-like sea monster and attempting to eat them) and God's creation (by threatening it with upheaval in the waters of Chaos).  According to the author of The Satanic Bible, Anton Szandor LaVey,  Leviathan is listed as one of the Four Crown Princes of Hell.  And following right on its heels, in demonology, the Leviathan is one of the seven princes of Hell (envy), and its gatekeeper.
So it kind of makes sense that chaos is reigning now throughout the world, doesn't it?  And with all the recent trouble with migrant refugees from the Middle East, the mingling of two hate-filled ideologies (Radicalized Islam and Nazism) only spells trouble for Europe and the world.  But just as evil was conquered at the Cross, the One Who Will Judge The World will crush the head of Leviathan and restore His peace upon the earth.  No amount of revisited hate and rebellion by the princes of hell can usurp the reign of our King.