Entertainment News: From Conspiracy To Collaboration

I have made my views on the current state of entertainment well-known.  While some may think that movies, TV and videos reflect our culture, I happen to believe that they are often used to drive our societal opinions and values.
I really try to stay away from the popular and tasteless fare that is fed to the masses, but there were two shows that I was curious about this week, because I know they will have tremendous impact upon the public.  The first was a revival of the well-liked 90s-era sci-fi mystery, X-Files; and the second was the premiere of a new show called Lucifer.  (At first, I determined that I would not deem to give my approval by even watching any show that appeared to glamorize the Enemy.  But then I felt that I could not truthfully warn against watching it, if I did not know the substance of the show). So, here's my thoughts after watching both programs .... I almost found it comical in the first episode of X-Files to see how hard the writers worked to get in every conspiracy that we have been faced with since the show last aired.  I must admit that I was not a devoted or enthusiastic fan of the first round of alien-infused adventures that starred agents Mulder and Scully.  But I was curious to see  how the show handled all the subterfuge and schemes that have become almost mainstream in the last  15 years.
The character Fox Mulder enumerates all the plots that have him spooked these days.  He voices his concerns over the government's growing intrusion in our lives, including constant surveillance of us through drones and advanced technology.  And speaking of technology, Mulder even goes so far as to suggest that the rapid rate of technological developments may be alien-assisted, or at least inspired by knowledge derived from aliens.  He's also not afraid to point out the militarization of the police, nor their objective to squelch such conspiracy theorists as himself.  He actually says, at one point, "The government lies as a matter of policy"!  It was as if all the things alluded to in the original series have now become accepted as fact.  And the direction that the first two episodes took toward giving credibility to alien abductions and "seeding the planet" with human/alien hybrid babies screamed Genesis 6:1-4 to anyone paying attention.  It will be interesting to see where the next episodes take the audience. 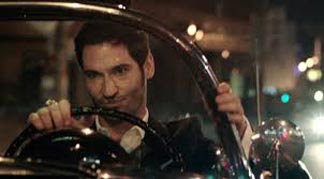 Then there was the very slick presentation of the new TV character Lucifer Morningstar.  It was almost sickening to see how they glamorized the primary Fallen Angel.  From his arrival on scene in a classic black 1953 Corvette (with a license plate that read Fallen1), to his suave British accent, and almost James Bond-ish appeal, it was evident that God's enemy was going to be presented as irresistible and captivating.
He apparently owns a nightclub, complete with whorish women and a seductive bartender who constantly reminds him that he should return to hell and his duties there.  But the devil in him longs to escape that prison and punish the wicked on earth; exposing their sins and helping the good guys fight evil.
Although there is much about Lucifer that is blasphemous ... his constant referral to God as "Father" and "Dad" diminishes the Holiness of our God and belittles His position.  That's just for starters.  And to paint the real Lucifer as simply an adventurous, spoiled, and naughty child of God who was unjustly cast out of Heaven is to totally misrepresent the very real danger of cooperating with him.   The fact that Lucifer became Satan was never addressed, nor were the depths of his hostile rebellion against God, The Father, truly revealed.
The one thing that the writers of this show did get right was how easy it was for Lucifer to beguile and entice people to reveal their deepest inner desires, and how he manipulated that to get what he wanted.  But then they have twisted that characteristic into showing how Lucifer simply wants to bring forth the Truth; knowledge that only he can bring forth to the world.  This is the classic Gnostic version of the Biblical story and Lucifer.
Gnostics believe that Lucifer is the liberator of man and the world.  He offers wisdom, the liberating Gnosis (knowledge of spiritual mysteries) that wakes man up and saves him.  He is the Light-Bearer, the embodiment of enlightenment and reason.  (It is no coincidence that the word Illuminati is from a Latin word which means “enlightened"... just sayin'.)  The Gnostics revered Lucifer as the beneficent god who gifted mankind with self-consciousness and awareness of his actions.  Lucifer is both friend and brother to his fellow man; and perhaps the most dangerous aspect of this vision of Lucifer is the aspect of "reconciliation of opposites"; that it's okay to work with Lucifer for the betterment of mankind.
And that is exactly how this attractive character of Lucifer Morningstar is being showcased.  But the very real sad and scary truth of this glitzy TV show is that it is the product of those who worship the real Lucifer, the Enemy of God; and its purpose is to fool the millions who will not only fall for the false image of Satan, but will fall for his lies and worship him, turning away from the knowledge of the One True God.
I predict that this show will become a runaway hit and a darling of the New Age crowd.  It is just one more step towards our culture's rebellion against our Creator, and brings us one step closer to our judgment.  It's pretty telling, don't you think, that we are being exposed to these two shows at the same time... the first announces that the alien (fallen angel) agenda is real; and the second heralds the appearance of the chief Fallen Angel, himself!