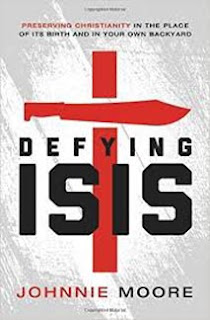 I recently read an important little book by Johnnie Moore, titled Defying ISIS.  Moore is a humanitarian who has written about his work with genocide victims in the Middle East, Bosnia and Rwanda and visited the world’s largest refugee camps.  Currently, he is sounding the alarm about Christian martyrs in Iraq and Syria who are faced with the barbarism of ISIS and the one option they have: convert or die.
This little book impacted me like none other I've read in a long time.  In his own words, Moore says he "relates the stories of men, women, and children who have given everything for their faith, even their lives, and stories of those who, when facing inevitable death, lifted their eyes to their God in hope that good will eventually triumph over this evil."  He tells their stories "so that the world will have the opportunity to remember those who stared down the hell of ISIS with the love of Jesus."  Moore tells the stories of the deliberate eradication of Christians in the land where Christianity once dominated.
There is the story of Mazen, a middle-aged man who lived in what was known as "Iraq's Christian capital", the city of Qaraqosh.  Moore relates that his once strong posture is now reduced to a humbled crouch as he recounts the horror of the morning ISIS arrived:  [It was] nine in the morning when a mortar landed on our house.  My son died.  My nephew was hit in the head.  My other son remains wounded, and our neighbor next door died... We fled, all of us ... My other son, Milad, died on the way.  I have another son who needs an operation; it costs $15,000.  Where would I get that?  We don't have a house or property or anything [anymore].
Then there is the tragic story of Aida, a young mother of a beautiful three-year-old daughter, Christina.  They also lived in Quaraqosh, one of the oldest Christian communities in the world.  It was four in the morning when ISIS arrived in their town, shooting their guns in the air, and shouting, "God is great!"  Then they began shouting something else ... "CHRISTIANS! Leave before we behead you!"  Aida tells us what happened next:  The situation deteriorated  day-by-day, and after ten days they told us to convert to Islam, or leave.  We were under house arrest.  They took our gold and money and even our extra clothing.
ISIS piled them on a bus and dropped them outside of town, to flee or die.  But before they did, they yanked Christina out of her mother's arms, and threatened to kill the hysterical mother on the spot.  Aida said, We don't know why they took our daughter; she was the only child left in Quaraqosh.  We don't know what happened to her.  I'm always thinking about her.  I can't eat or sleep... I keep seeing her in my dreams.  Can you imagine?  Why isn't the world screaming about this inhuman barbarity?  Why aren't we Christians in the West more aware this is happening and interceding on behalf of our Christian brothers and sisters?
There are the stories of the kidnapping, selling, and trading of children.  As if that is not enough, there are the excruciating stories of the execution of children!  Moore says that "the most conservative estimates put the number of executed children in Syria alone at more than 10,000... [ISIS] revels in the chance to inflict a particular type of horror into the hearts of those they hate.  They sincerely believe they are doing a justice by ridding the world of another generation of Christians, and so they massacre them with pure joy."  What if this was a European child?  An American child?  Why is the world silent? 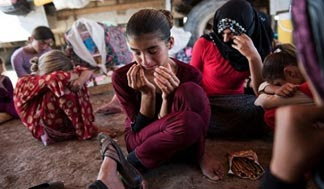 It is also the goal of those who promote the Islamic Caliphate to enslave Christian wives and abuse Christian daughters.  I think you know what that means.  We, in the West, are aware of human and sex trafficking (although we are loathe to admit it or confront it openly).  But a smuggled price list from a slave market was recently published by Iraqi News.  The document states that Christian and Yazidi girls are particularly targeted and priced according to age:  ages 1-9 cost $172; ages 10-20 cost $130; ages 20-30 cost $86; ages 30-40 cost $75; and ages 40-50 are sold for $43.  Below the prices on the document, bearing the official seal of the Islamic State of Iraq, it reads, "Customers are allowed to purchase only three items [slaves] with the exception of customers from Turkey, Syria, and Gulf countries.  Obey and follow the rules and laws of the Islamic State or be killed."
The website, Breaking Israel News, reports that theologians of the Islamic State (ISIS) have issued what can only be described as exceptionally detailed rulings on when “owners” can have sex with female slaves captured by the jihadist group.  The report also added that rather than hiding their practice of slavery, ISIS takes great pride and has even established a department of “war spoils” to manage their slavery trade.
It is hard enough to read of this horrific abuse against women when it is written in general terms and statistics.  It is another to hear the personal story of Mayat, a 17-year-old Yazidi girl who had been kidnapped and told of "rooms of horror" where "women are raped, often by different men and throughout the day... Often I wish they would beat me so hard I will die.  But they are cowards even in this.  None of them have the courage to end our suffering... even if I survive, I don't think I'll be able to remove this horror from my mind.  They have already killed my body.  They are now killing my soul."
Then there is the story of Zena, a 20-year-old chemical engineering student in Mosul.  When ISIS came to town she had three strikes against her:  First, she was a Christian; Second, she was a woman; and Third, she was a woman with ambition.  When Johnnie Moore met her, she was wearing the same pajamas she was wearing the night ISIS arrived.  Zena told him that her sense of hope was destroyed when ISIS decimated their church and Christian community; it was an assault "on their security in a deep and personal way."
But Zena was one of the lucky ones.  In the Syrian city of Al-Mayadin, a female dentist was captured and beheaded because she dared to treat both men and women.  Many others have been stoned to death and buried in shallow graves, or kidnapped and forcibly married to ISIS fighters.  Needless to say, all women are being forced to comply with a strict dress code, and are threatened with death if they refuse. 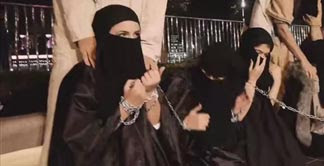 One elderly man, when questioned by Moore about why he fled his hometown, replied, "I will tell you why I left my district.  I left it because they stormed our house barbarically at 2 a.m., harassing us, pointing their flashlights toward our women.  We didn't come from another country.  We are from an eastern society.  We are Iraqis and we are jealous of our honor.  So we left to avoid them because they already threatened to arrest our women.  They told my mother that they would arrest her if they couldn't find us."  So, he left to protect his mother, his wife, and his daughters.
There are more stories than these... thousands of stories, and many of them much more savage and cruel.  And I wanted to let the voices of Johnnie Moore (who has seen these atrocities first-hand) and the victims speak for themselves.  I wanted to shake us western Christians out of our comfort zones to face the existence of this very real war on Christianity.  It is a war that will not be confined to the Middle East, and is designed to be waged worldwide.  We must wake up and determine that we will  not only intercede in prayer on behalf of our fellow Christians, but turn our attention, time, and resources to supporting them in their hour of need.
I want to leave you at this part of the story, if you will, with the words of Sister Rose, a young nun from Mosul, Iraq, who has poured her life into the lives of Christian refugees as they have fled from city to city, and she among them.  Sister Rose told Johnnie Moore, "I lived in America.  Americans are wonderful people.  It's shocking to me that they are so silent in the face of our genocide.  Please help us.  Raise your voice for us.  Our children are dying.  In America you care for your pets so well, can you care for your Christians brothers and sisters who are suffering?"
Can we?  On Monday's post, I will finish my report on the work of Johnnie Moore and why he thinks these stories should matter to you; how he thinks we defeat ISIS; and his unique perspective on Christianity in the heart of a Muslim Middle East.  It's time that the world awakes from its slumber, and it is especially time for us Christians.  The very existence of our faith in its birthplace in the Middle East, and our lives, here in the West, depend on it.