What's In A Name?

While I'm watching the leaders of the world put on their spectacle called "The Global Warming Summit", I want to take a little side trip to a topic that grabbed my attention over my break.  Even though the President states that climate change offers a threat equal to, or greater, than Islamic terrorism, have you begun to notice that he and a few of the media are beginning to use the term "Daesh" (pronounced variously as DIE-ESH or DASH) to refer to ISIS?  My first thought was, "Isn't it enough that we play this little word game between ISIS and ISIL?  Now we have to add a new name to the discussion?"
Then I decided there had to be a specific reason that this name play is being propagated, so what is the theory and reasoning behind our President, the Prime Minister of Australia, and the various heads of Europe using it?  I found several articles -- all from the Western world -- which basically explained it this way:  Just as ISIS is short for "Islamic State in Iraq and Syria," or "Islamic State of Iraq and al-Sham," which is an old Arabic term for the area, and ISIL translates to “Islamic State of Iraq and the Levant,” DAESH is supposedly an Arabic acronym for “al-Dawla al-Islamiya fi al-Iraq wa al-Sham”, which is what they call themselves.  It can sometimes be spelled DAIISH, Da'esh or Daech, a popular French version.  Confused yet?  (Personally, I don't quite see where you get the letters D-A-E-S-H from that Arabic phrase).  You will also read in the Western media that the reason DAESH hates being called DAESH is because it’s similar to the verb Daes, which means “one who crushes something underfoot".   It also sounds similar to Dahes, or “one who sows discord.” 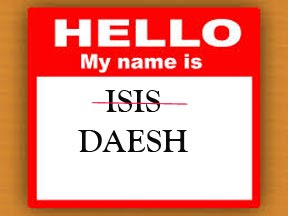 Another explanation for the use of DAESH in the West is that, depending on how it is conjugated in Arabic, it can be an insult.  It can mean anything from ‘to trample down and crush’ to ‘a bigot who imposes his view on others' -- not exactly the high opinion that the Islamic Caliphate holds of itself.
You can see why it's easy to attribute those meanings to the new name of the Middle Eastern threat... they make sense to our Western minds.  But then I happened upon an article by Alice Guthrie, an actual Arabic translator.  She attempts to school us, here in the West, about the real reason this new name is being used.
Guthrie says that not only are these explanations wrong, but the same misinformation is being shared across the Western media -- sometimes word for word -- and it simply doesn't make sense.  To be sure, the acronym of ISIS can be seen in the term “al-Dawla al-Islamiya fi al-Iraq wa al-Sham” (Dawla = State; Islamiya = Islamic; Iraq = Iraq (naturally); and al-Sham = Damascus/Syria).  So, we can see where the word "ISIS" comes from; and can see the connection between DAESH and the Arabic verb Daes (meaning "one who crushes something underfoot"), but why would the self-proclaimed Caliphate give a darn what the Western world calls them?  Why are Leaders and media in the West so determined to add another acronym to their description?
I'll ask the same question Alice Guthrie presents:  Why are the people it describes in such a fury about it? I will let Alice answer her own question:  "Because they hear it, quite rightly, as a challenge to their legitimacy: a dismissal of their aspirations to define Islamic practice, to be 'a state for all Muslims’ and – crucially – as a refusal to acknowledge and address them as such. They want to be addressed as exactly what they claim to be, by people so in awe of them that they use the pompous, long and delusional name created by the group, not some funny-sounding made-up word. And here is the very simple key point that has been overlooked in all the English-speaking press coverage I’ve seen: in Arabic, acronyms are not anything like as widely used as they are in English, and so Arabic-speaking people are not as used to hearing them as those of us in the West are. Thus, the creation and use of a title that stands out as a nonsensical, newly-coined word for an organization like this one is inherently funny, disrespectful, and ultimately threatening of the organization’s status."
Guthrie goes on to explain that we must not dismiss the power of social media in the use of DAESH, as well.  The use of this word is part of a multi-pronged, diverse range of efforts by Arabs and Muslims to reject the terrorists’ linguistic posturing, their pseudo-classical use of Arabic, their claims to Quranic authority and an absolute foundation in sacred scripture, as reflected in their pompous name.
So while the use of satire in the East is part of the proliferation of the use of DAESH to describe the self-appointed Caliphate, there is another aspect that the West tends to miss.  First of all, both the shape of the word and the combination of letters in it are suggestive of words from al-jahaliyya, the pre-Islamic Dark Ages or ‘age of ignorance’ that – as well as being a time rich in poetry and narrative heritage – has huge connotations of hideous barbarity in the popular Arab imagination, being the realm of jinns and monsters and evil spirits and marauding freaks.
Another  equally important point is another reason why the new acronym is insulting: it’s an obviously fictitious name, for an obviously fictional concept. Once again, the Caliphate movement's claim to legitimacy as a state, and it's right to rule, is being rejected as nonsense, reflected in a fabricated nonsense name for them.
So the real reason that the name DAESH insults the Caliphate is not just that the name makes them sound little, silly, and powerless, but that it implies they are monsters, and that they are made-up.  So can you see the frustration and confusion that surrounds the use of this new acronym?  The proper use of it in the Arab-speaking world is designed to insult and de-legitimize the terrorist organization.  But none of that is explained here in the West, and there is no sense of the intended mockery and derision.  So why even use it?  If we, the American and Western audience, don't fully understand the purpose of its use, doesn't the term DAESH tend to add more mystery and authority to these evil men?
Ultimately, I guess the question becomes this:  will the application of the term in the West serve to damage their cause as much as it will in the Middle East?  I don't claim to know the answer to that, but I thought you should have a little more information about the terminology than we have received to date.  So, what is in a name?  In this case, it doesn't change a thing whether you call the Islamic terrorists ISIS, ISIL, or DAESH.... but, now, if you choose to call them by the latest moniker, you'll know WHY.

Ecclesiastes 7:1    "A good name is better than precious ointment, and the day of death than the day of birth."