The "War on Christmas": The Truth, The Reality, & The Confusion

It certainly seems to me that with each passing year, the "war on Christmas" gains steam and the religious and spiritual sense of Christmas diminishes a little more.  Actually, in our early history as a nation, Christmas was celebrated in a far less extravagant manner than it is today... some people might choose to go to a church service, but more often than not, it was an understated family affair, and the idea of piles of gifts under a Christmas tree was more the result of some smart marketing, than any Biblical significance. 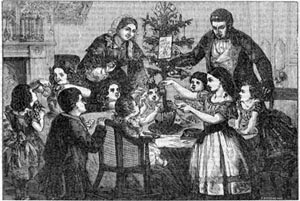 It was actually the upper classes who had the money and time to create specific holiday traditions that caught the idea of entrepreneurs and canny businessmen.  Clement Clarke Moore’s poem, “A Visit from St. Nicholas,” written for his family’s entertainment in 1823, was soon endlessly reprinted each season in newspapers. In the years after the Civil War, Thomas Nast created a full narrative (and image) of the life of Santa Clause through his vivid engravings for Harper’s Weekly magazine.  In 1870, when Godey’s Lady’s Book, the most widely read magazine in the nation at the time, published an image of a family gathered around a small tree set atop a table, the idea of a Christmas tree soared in popularity, and a new industry was born.
It wasn't long before F.W. Woolworth -- who had already pioneered a successful business model based on fixed prices and 10 cent inventory -- quickly saw the commercial possibilities in importing Christmas ornaments from Germany where, he reported, they were “made by the very poorest class.” It's not hard to see that this romantic sentimentalism, combined with the advent of Christmas lights, Christmas cards, and an unlimited supply of creative Christmas decorations, contributed to many vibrant commercial opportunities.
Today we have seen the huge success of these opportunities in our new tradition of Black Friday, one of the busiest shopping days of the entire retail industry.  In fact, in recent years, it has contributed greatly to the success or failure of our domestic economy.  Sadly, it is this very Christmas "market" and the consumer economy it sustains that has come to embody "the spirit of Christmas."  So much so, in fact, that political movements like Black Lives Matter think that by disrupting Christmas shopping at the Mall of America in Minnesota, they can gain more traction for their social crusade.  (Little do they know, that they are just pawns of the behind-the-scenes players whose goal is to cause disorder and havoc for their own benefit -- but, I digress). 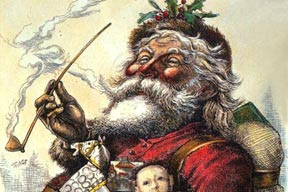 I actually found it interesting to peruse an atheist website to get their take on the growing friction over the Christmas holiday.  Consider this comment by one such unbeliever when posed with the question, Why has Christmas become less "secular" in the last decade or two?  Here is his answer:  "Of course all of us atheists are fully aware that Christmas is a secularized holiday, but it seems that the culture at large has now resorted to this idea that it's specifically "Christian" and therefore inappropriate in public contexts, even when it's just the secular elements being involved. You have stories like this councilwoman, who resigns because tree lighting is renamed to add the word "Christmas", and the university diversity office condemns holding Christmas parties because they are non-inclusive, and so on.
This has the effect of turning any mention of "Christmas" into a religious or political statement... I love Christmas, and I don't want to be associated with Christianity or the right-wing just because I happen to refer to the holiday itself.  Europe doesn't seem to have this problem... why do we?  Is it because of PC attitudes, or because of the right-wing?"
Don't you find it hilarious, that atheists actually hate the non-religious people in the public arena complaining about possible religious ties to Christmas, because they think it actually calls more attention to the religious connotations of the holiday?  What they are really saying is, "when you make an issue of Christmas displays and greetings being too religious, then you are ruining it for me, because I actually like Christmas, and now I'm somehow politically aligned with right-wing Christian nuts!"
Another atheist commentator felt he needed to make sure everyone was aware that, in the past, Christmas was this thing everyone celebrated, but it was always a Christian holiday.  But, now that we have become more ... ahem, enlightened ... we realize that it's not OK to ignore all the other religions in our diverse population, and it's time the Christians get over claiming the holiday for themselves.  He, of course, is in favor of the all-inclusive "Happy Holidays" because it incorporates all the minority religious holidays.
He goes on to say, "In all this, of course, the true meaning of Christmas has been lost. The reason for the season is obviously commercialism. Christmas is your cue to go out and buy! You used to get big corporate-sponsored Christmas decorations and pageants and such. Originally, this was inoffensive because non-Christians just shut up about it and enjoyed the Christian holiday, but now the Christmas (or Christian) stuff is done at the risk of alienating a significant part of the consumer base... Is there a War on Christmas from the left? Not really. It's just general social progress, resisted by the Culture Warriors."  For the life of me, I'm not sure how or why we Christians are now referred to as the "Culture Warriors".  Doesn't make sense to me ... but then again, very little in this world makes sense to me anymore.
So, there you have it.  We Christians, who are being marginalized in what the rest of society likes to call "social progress", are just supposed to accept that we no longer have proprietary or exclusive rights to Christmas.  Granted, I see very little of the Bible in our commercialization of Christmas; but any attempt to remove Christ from the public forum offends me -- even if I do have some issues with what we Christians celebrate as the "true meaning of Christmas."  But, you'll have to wait until tomorrow to see my perspective on that loaded statement.  Until then, let us agree on the cause for celebration on any day of the year ... that God so loved us that He sent His only begotten Son to die for us.

Thanks to the websites, Bloomberg View and Reddit, for their contributions to the history of the commercialization of Christmas and the atheist viewpoint of this religious holiday.

John 1:9    "There it was—the true Light [the genuine, perfect, steadfast Light] which, coming into the world, enlightens everyone."