At Last, A Statesman

Today is the day I'm going to give in to my idealism and let my sentimentality give me a notion of hope.  It's taken me awhile to get around to this, but I think it is more important than ever that we contemplate the words of the Junior Senator from Nebraska, Ben Sasse.  Among his accomplishments, he is a well-educated legislator (a Bachelor's degree, multiple Master's degrees, and a Ph.D.); he was president of a private college in Nebraska, where he ended lifetime tenure for professors; and he appears to have solid conservative credentials, while remaining his own man in Washington.  It remains to be seen if he can keep his soul in that den of thieves.
But in November, Senator Sasse took to the floor of the Senate to give his inaugural speech and to challenge not only the lawmakers, but us citizens, to become more enlightened, nonpartisan-thinkers with a sense of history.  The occasion for his speech was his concern over the growing threat of overreaching Executive power.  I think that is something we all are watching, as each day the news media suggests that after the Christmas recess, we will see aggressive action on the part of the President regarding gun control and the limiting of our Constitutional freedoms.
So, read his words, as I present them here.  This is not his complete speech, and I recommend that you take the time to get to know him by reading it in its entirety.  But I want to present the highlights; the reasons why I think he gets it right, and why I think he deserves to be heard.  See if you don't agree .... Senator Sasse's remarks from the Senate Floor:

Thank you, Mr. President. I rise to speak from the Floor for the first time today. I have never been in politics before, and I intentionally waited a year to speak here.
... Let me explain briefly why I chose to wait a year since Election Day before beginning to fully engage in Floor debate.
I’ve done two things in my adult worklife: I’m a historian by training and a strategy guy by vocation. Before becoming a college president, I helped over a dozen organizations find strategies to get through some very ugly crises. One important lesson I learned over and over is that, when you walk into any troubled organization, there is a delicate balance between expressing human empathy and yet not passively sweeping hard truths under the rug. On the one hand, it is absolutely essential to listen first, to ask questions first to learn how a broken institution got to where it is – because there are reasons. Things drift and fray for reasons; people rarely set out to break special institutions they inherit.
... Please do not misunderstand: Do not confuse a deliberate approach [of waiting to speak] with passivity. I ran because I think that the public is right that we as a people are not tackling the generational crises that we face: We don’t have a long-term foreign policy for the age of jihad and cyberwar; our entitlement budgets are completely fake; we are entering an age where work and jobs will be more fundamentally disrupted than at any point since hunter-gatherers first settled in agrarian villages. And yet we don’t really have any plans. I think the public is right that we as a Congress are not shepherding the country through the serious debates we must have about the future of this great nation.
... No one in this body thinks the Senate is laser-focused on the most pressing issues facing the nation. No one. Some of us lament this fact; some are angered by it; many are resigned to it; some try to dispassionately explain how they think it came to be. But no one disputes it.
And if I can be brutally honest for a moment: I’m home basically every weekend, and what I hear – and what I’m sure most of you hear – is some version of this: A pox on both parties and all your houses. We don’t believe politicians are even trying to fix this mess. To the Republicans, to those who claim this new majority is leading the way: Few believe that. To the grandstanders who use this institution as a platform for outside pursuits: Few believe the country’s needs are as important to you as your ambitions. To the Democrats, who did this body harm through nuclear tactics: Few believe bare-knuckled politics are a substitute for principled governing. And does anyone doubt that many on both the right and the left now salivate for more of these radical tactics? The people despise us all.

And being the historian/college president and crisis turn-around guy that he is, Senator Sasse proceeds to "school" his fellow Senators:  This is a place that would be difficult today to describe as "the greatest deliberative body in the world" – something that has often been true historically.
Socrates said it was dishonorable to make the lesser argument appear the greater – or to take someone else’s argument and distort it so that you don’t have to engage their strongest points. Yet here, on this Floor, we regularly devolve into bizarre partisan-politician speech. We hear robotic recitations of talking points.
Well, guess what: Normal people don’t talk like this. They don’t like that we do. And, more importantly, they don’t trust us because we do...
Do we think the Founders would have regarded a 9% Congressional approval rating – a stunning level of distrust in representative government – as an existential crisis? Do we? Is it conceivable that we can get away with just drifting into the future, or is it essential that we fix this?
Count me emphatically among those who think we need to fix it. We should not be okay with this. And if we are going to restore this place, part of it will center on recovering the executive/legislative distinction. The American people should demand more of us as legislators, and they should demand more of the next president as a competent administrator of the laws that we pass. That is only possible if we again have some identity commitments that are about the Constitution’s Article I (the legislature) in tension with the duties of the Article II branch (the executive). Everything cannot be simply Republicans versus Democrats. We need Democrats to speak up when a Democratic president exceeds his or her powers. And I promise you that I plan to speak up when the next president of my party exceeds his or her proper powers.
To that end, in the coming months, I plan a series of Floor speeches on the historic growth of the administrative state. This will not be a partisan effort; it will not be a Republican senator criticizing the current administration because it is Democratic. Rather, it will be a constructive attempt to understand how we got to the place where so much legislating now happens inside the executive branch – for this kind of executive overreach came about because of a great deal of symbiotic legislative underreach. Republicans and Democrats are both to blame for grabbing more power when they have the presidency; and Republicans and Democrats are both to blame in the legislature as well for not wanting to lead on hard issues and take hard votes, but rather to sit back and let successive presidents gobble up more authorities. We can and we must do better than this. And the century-long look at the growth of executive branch legislating over the next many months will be an attempt to contribute to the efforts of all here, both Democrats and Republicans, who would like to see the Senate recover some of its authorities and some of its trustworthiness...
Each of us has an obligation to be able to answer our constituents’ question: "Why doesn’t the Congress work? And what is your plan for fixing the Senate in particular?" And if your only answer is that the other party is fully to blame, then we don’t get it, and the American people understandably think that we are part of the problem, not the solution...
Representative government requires civic reengagement. Our people need to know that we in this body are up to the task of leading during this time of nearly universal angst about whether this nation is on a path of decline. I think we can do better – and I want to labor with all who want to figure out how.

To use a sports analogy, I know that we are in the bottom of the ninth, with two outs, and two strikes against us -- and I know that we have been fooled before by men and women we thought were going to uphold the legacy of Liberty that we hold so dear.  Is Ben Sasse the "real deal"?  It will remain to be seen.  He got one thing right; he says that the Senate is "a human institution populated by sinners."  As such, we cannot expect them to be perfect.  But we can -- and should -- expect them to uphold the job they have been elected to do.  And I must admit I'm not even sure that can be done in the midst of the profoundly immoral and corrupt cesspool that has become the spiritual wasteland called Washington, D.C. 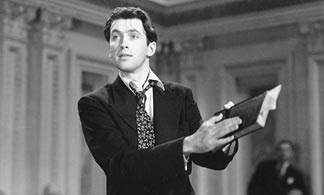 And call me the hopeless romantic that I am, but a little part of me is hoping that Senator Ben Sasse is cut out of the same cloth as one of my favorite movie characters, Jimmy Stewart as "Mr. Smith Goes To Washington".  Somehow, I think Senator Sasse would agree with Mr. Smith when he says, "Take a look at this country through [the eyes of the Statue of Liberty] if you really want to see something. And you won't just see scenery; you'll see the whole parade of what Man's carved out for himself, after centuries of fighting. Fighting for something better than just jungle law, fighting so's he can stand on his own two feet, free and decent, like he was created, no matter what his race, color, or creed. That's what you'd see. There's no place out there for graft, or greed, or lies, or compromise with human liberties...  And it's not too late, because this country is bigger than the [all the corrupt politicians], or you, or me, or anything else. Great principles don't get lost once they come to light. They're right here; you just have to see them again!"
So, will we ever see them again in this country -- in this world?  Historians say that this country was a grand experiment; no other men in history have been given the opportunity to establish a republic founded on individual liberty.  Can we keep it?  Or will we just be an asterisk in the history books?  We must not discount God, whom I firmly believe has had His hand on us since our founding.  But I cannot dismiss the fact that we have removed ourselves from under the protection of that Hand, and may be suffering the effects of our own self-worship.  I think, in effect, that is what Senator Sasse has expressed.  It remains to be seen if his speech will make a difference.  But I, for one, thank him for making the effort, and I pray that he spoke into the spiritual darkness that pervades our nation's capitol and put them on notice...

Luke 22:26     "But not so with you. Rather, let the greatest among you become as the youngest, and the leader as one who serves."