The World On Edge

It took only a matter of hours after his speech at the United Nations for Russian President Vladimir Putin to act.  It was a speech that argued that "certain" nations had circumvented the U.N. charter and acted selfishly, resulting in a power vacuum in the Middle East that has been filled by Islamic terrorists.  It was a speech that charged "it is hypocritical and irresponsible to make loud declarations about the threat of international terrorism while turning a blind eye to the channels of financing and supporting terrorists, including the process of trafficking and illicit trade in oil and arms."  He went on to say, "It would be equally irresponsible to try to manipulate extremist groups and place them at one's service in order to achieve one's own political goals in the hope of later dealing with them or, in other words, liquidating them."
To sum up his speech, it was one that seemed to indicate not only veiled accusations against the U.S., but also proposed that the UN had out-lived its original purpose, and nations must come together and build a coalition against global terrorism.  But he also stressed that state sovereignty must be recognized, and seemed to indicate that where this sovereignty came into conflict with the UN charter, that a nation's autonomy and dominion ruled. 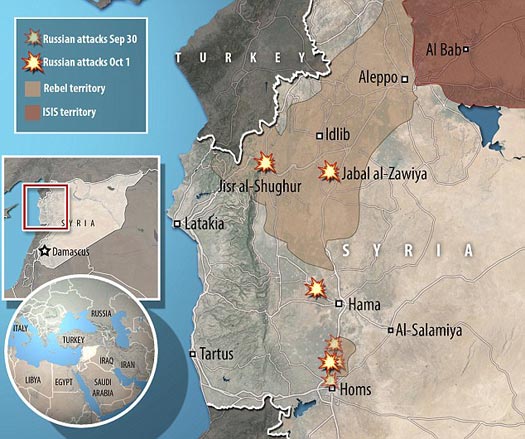 So, as I said at the beginning of this blog post, it took a very short time for him to act on the latter proposition.  On Wednesday, Russia, without U.N. authorization, began airstrikes in Syria, and have since conscripted a reported 150,000 troops to begin a ground offensive.  Depending on whether you listen to U.S. spokesmen, or Russian, these attacks are designed to prolong the sectarian strife in the Middle East, or to begin a campaign for wiping out ISIS, which Russia says other world leaders have let go far too long.
I certainly cannot offer an informed analysis on what is really behind the actions of global powers.  Since when has any government been truthful to its people during wartime?  All I know is that my Biblical worldview is becoming clearer.   In the battle of Ezekiel 38-39, the armies come primarily from the north and involve only a few nations of the earth.  I am not ready to declare that this is what we are seeing at the moment, but it certainly feels like we are headed in that direction.  Russia and Iran are definitely combining their efforts, supposedly to join forces to fight ISIS.  But has anyone given any thought to how this might eventually effect Israel?
We must not forget the following statements from the leading military and religious leaders of Iran...  the major general of Iran’s army proclaimed this, "We will annihilate Israel for sure. We are glad that we are in the forefront of executing the supreme leader’s order to destroy Israel." And as for the Supreme Ayatollah, himself—a few days after the US/Iran nuclear deal was announced, he released his latest book.  It is a 400-page creed planning to destroy the state of Israel.  Last month, Khomeini once again made the genocidal intentions clear before Iran’s top clerical body, the Assembly of Experts.  He spoke about Israel—home to over 6 million Jews. He pledged, "There will be no Israel in 25 years."
Therefore, I submit to you the words of Israel's Prime Minister, Benjamin Netanyahu, as he spoke before the United Nations General Assembly.  Netanyahu said, “Ladies and gentlemen, I have long said that the greatest danger facing our world is the coupling of militant Islam with nuclear weapons. I am gravely concerned that the nuclear deal with Iran will prove to be the marriage certificate of that holy union. I know that well-intentioned people sincerely believe that this is the best way to block Iran’s path to the bomb, but one of history’s most important, yet least learned lessons is this, the best intentions don’t prevent the worst outcomes. The vast majority of Israelis believe that this nuclear deal with Iran is a very bad deal. What makes matters even worse is that we see a world celebrating this bad deal ... Seventy years after the murder of 6 million Jews, Iran’s rulers promised to destroy my country, murder my people, and the response from this body, the response from nearly every one of the governments represented here has been absolutely nothing. Utter silence. Deafening silence.”
Then Netanyahu made his point in a most dramatic way --- he stood silent for almost a minute.  And then he continued, “Ladies and gentlemen, it is not easy to oppose something that is embraced by the greatest powers in the world.  Believe me, it would be far easier to remain silent. But throughout our history, the Jewish people have learned the heavy price of silence. And as the Prime Minister of the Jewish state—as someone who knows that history, I refuse to be silent. I’ll say it again—the days when the Jewish people remain passive in the face of genocidal enemies, those days are over...  For in every generation, there were those who rose up to destroy our people. In antiquity we faced destruction from the ancient empires of Babylon and Rome, and in the Middle Ages we faced inquisition and expulsion, and in modern times we faced the Holocaust, and yet the Jewish people have persevered, and now another regime has surfaced swearing to destroy Israel. That the regime would be wise to consider this, I stand here today representing Israel, a country 67 years young, but the nation state of the people nearly 4,000 years old. Yet, the empires of Babylon and Rome are not represented in this hall of nations, and neither is the thousand year Reich, those seemingly invisible empires are long gone, but Israel lives. The people of Israel live.”
So, I ask you, what is the significance of Russia and Iran uniting to fight in Syria?  After all, these very nations are the ancient nations of Old Testament prophecies.  Gog, Magog (Russia), Persia (Iran) and the city of Damascus in Syria all play important parts in End Times eschatology.  And we must not ignore that Turkey, Iraq, Jordan, and China are players to be considered, too.  So, has God begun to implement His judgment upon the earth?  Are these the first stirrings of the Tribulation?  No one can say.  But this much I do know ... if it is the beginning, it is all for God's glory and to call His nation Israel back to Him.  Just like America, the people of Israel [largely] do not recognize or worship the God of Abraham, Isaac, and Jacob.  The Talmud and Kabbalah are methods, Rabbinic teachings, and doctrines that originated in Judaism but often distort God's original Word, just as the Emerging Church and New Age religion have twisted the Church.
We must not be surprised if war is a Divine factor in their awakening and redemption.  Whether it happens tomorrow, next week, next month, or several years from now, He will save His remnant ... He always has.  May that day come soon.

Isaiah 37:29    "Because you rage against Me and because your insolence has reached My ears, I will put my hook in your nose and My bit in your mouth, and I will make you return by the way you came."