When Will We Face The Truth?

First of all, let me say, that I grieve over the deaths of the students who were tragically killed on that college campus in Oregon.  No loss of life is ever justified in this manner, and we are just at the beginning of all the theories, conjectures, speculations and accusations.  The internet is abuzz with "information" on the shooter.  What is the real truth, and will we ever know all the facts surrounding the perpetrator, or why he did what he did.  Was it his seeming isolation coupled with his alleged involvement with magick and the occult?  Was it his purported interest in paramilitary groups like the IRA or ISIS?  Was he really a Christian-hater and/or a proponent of the Black Lives Matter group?  Or just like all the latest murderers who use a gun as their weapon, are we simply willing to lay his actions at the feet of "mental illness"?  I'm sorry, but all of these questions and suppositions just aren't lining up to give us a clear picture of who this killer was.
Yet instead of trying to solve the mystery of how all these similar shootings committed by disgruntled, alienated malcontents are connected, we get another lecture chastising the American people and Congress for not pursuing stricter gun control laws.  Frankly, I am tired of this argument, and exhausted by the political posturing.  Guns, in this case (and the other mass shootings), are the choice of weapon that evil uses to create mayhem, chaos, and death.  In fact, the definition of a weapon is "a thing designed or used for inflicting bodily harm or physical damage; [and in this instance] a means of gaining an advantage in a conflict."  Why can't we ever get beyond the instrument of violence to focus on the slayer? 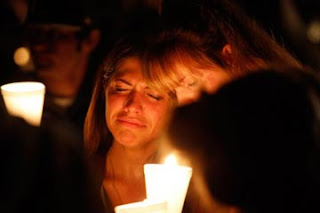 And I'm not talking about the particular shooter or gunmen; I'm talking about the murderer who "has been since the beginning" (John 8:44), and who is behind every deluded person who picks up a gun thinking it will settle a score, give him notoriety, eliminate his enemies, or just because he hears "the voices in his head."  This murderer is the devil, and he is actually a thief ... the one who robs the shooter of the truth -- which is that the devil/murderer has only one objective: to steal, kill, and destroy humans.  And the shooter is simply his instrument.  The truth is that the shooter's murderous rampage will not silence his demons nor fill the emptiness inside.  It only serves to feed the devil's lust for power and his insatiable appetite to devour.
As I have pointed out time and again, we must decide to quit looking at surface issues as a way of explaining away the growing evil that is coming upon the earth.  None of the things that the media or pop psychologists wish to suggest as the reasons why mass shootings are occurring is the root of this epidemic.  Yes, being a loner; social media; anger; feeling marginalized -- these are all elements that feed into a profile of a mass shooter.  But these men have listened to the lies of the Tempter; lies that suggest the world will appreciate their violent deeds and their names will be celebrated.
The very fact that this shooter asked his victims to state whether they identified as Christians or not leaves no doubt in my mind that the devil is ramping up his agenda.  He is no longer being subtle or hiding his motives.  The shooter -- the devil's instrument of murder -- targeted, as his victims, those who believe in Jesus Christ.  They were shot point-blank in the head.  Those who didn't answer or said, "No" were shot in the leg.  What could be more apparent?  God's enemy destroys those who are loyal to Him.  Yet, that narrative is already beginning to fade from the media reports -- if it has been mentioned at all!  We can't have that piece of the puzzle out there front and center, now can we?  But a note left behind by the shooter clearly states his purpose: he would be "welcomed in Hell and embraced by the devil."  I hope he is enjoying his eternal damnation.
In the meantime the news media and politicians will spend the next days, weeks, and months discussing how and why [or why not] stricter gun laws, or more regulations regarding the mentally ill will eliminate the next mass shooter.  But this should be a big warning flag for those of us who recognize Jesus as our Savior; we should be spiritually discerning that the devil is getting bolder and more confident in his attacks.  We should be spiritually preparing to resist the coming attacks, and above all else, be ready to declare our allegiance to God --- even unto death.  What courage it took for that second, third, fourth ... ninth student to identify themselves as belonging to Christ; to stand for Him in what was a certain and unavoidable death at the hands of the devil's proxy.  If there is any comfort at all in this tragedy, it is the steadfastness of faith displayed by these saints.  When my time comes, may I be as bold and unflinching as they.

1 John 3:8    "He who sins is of the devil, for the devil has sinned from the beginning. For this purpose the Son of God was manifested, that He might destroy the works of the devil."