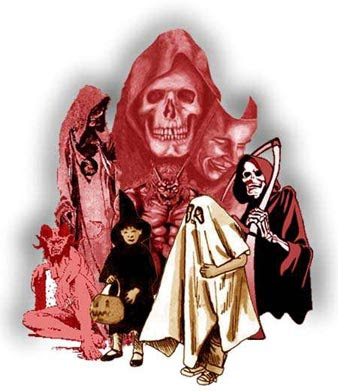 So tonight is the controversial holiday, known as Halloween.  One can go online to search out whether Halloween is an acceptable holiday for Christians, or if it is really an evil day, celebrated by Satanists and occultists.  For each site you visit, I suspect you will find a different answer.
There will be those sites who declare it to be a benign evening of "tricks and treats" for the youngsters, while others will warn of its demonic undertones.  There will be attempts to "Christianize" the holiday by offering Trunk-or-Treat events (popular among churches) to bring Halloween to parking lots where kids go from car to car and get candy.  There will be countless Fall Festivals innocently celebrated, and there will be people who simply don't care, accurately saying that all holidays have pagan roots and it is what you make of it today that matters.
And that's exactly why we should care about this controversial holiday.  Whether a devout Christian or a non-religious secularist, most people believe that Halloween is a night of candy and costumes and autumn celebrations/festivals that ALL people can share.  But what about the satanists and witches?  Shouldn't we care what it is to them?
Known as "Samhein" to this latter group, Halloween is a transitional time, and an initial stage of a process in which the veil between life and death grows thin.  I found a Christian website (Logos Resource Pages) that featured an article by Pastor David Phillips that seemed to offer some straightforward information on the holiday.  Consider what the following self-declared witches had to say about the holiday... "Halloween is one of the four Great Sabbats of the witches that everyone has heard about. To witches, Halloween is a serious occasion, however merrily celebrated. It is the old Celtic Eve of Samhain. With the coming of Christianity, the Church tried to Christianize the old festival by naming November 1st as All Saints Day, or All Hallows as the old term was. Thus Samhain Eve became All Hallows Eve, or Halloween. But attempts to discourage the pagan celebrations were so unavailing that the festival was eventually banned from the Church calendar. It was not until 1928 that the Church of England formally restored All Hallows to its calendar, on the assumption that the old pagan associations of Halloween were at last really dead and forgotten; a supposition that was certainly premature."
Another witch's testimony:  "All the Great Festivals of Paganism, wherever they may be found, correspond in common with the Solstices, Equinoxes, and other natural annual cycles of life. Most of these remain with us today, in more or less disguised form, as the so-called Christian holidays of Christmas (Yule), Easter (Ostara), May Day (Beltane), Thanksgiving (Harvest Home), Halloween (Samhain) and even Groundhogs day (Oimelc)."
Still, another confirmation of Halloween's importance to occultists:  "Salem (Massachusetts) is a mecca, especially around Samhain. It is our holiday, our new year, and a lot of witches come here from all over the world".
As Pastor Phillips concluded, Witches and Satanists love Halloween. They get a lot of media coverage around this time of year. It's good P.R. for them because the coverage, as a rule, portrays them in a favorable light.  In addition, Halloween generates interest in "the craft" and is good for recruitment purposes. As Craig Hawkins, Founder and President of Apologetics Information Ministries, put it: "With increasing vigor, witchcraft is coming out of the broom closet. Many witches are actively seeking public understanding and acceptance."
And they are receiving it!  In 2009, a federal judge ruled that a federal correctional facility in Jefferson County, Colorado must allow a prisoner to perform a Satanic ritual on Halloween.  At the time, Judge Edward Nottingham issued a preliminary injunction allowing the ritual, even though the prisoner admitted it included a destruction ritual, in which he visualized the death of his enemies.
In 1987, the Maine State Prison allowed members of a witch coven (the Coven of Dawn) to hold a two-hour service on the feast day they call Samhain (Halloween), after the Druidic festival of year's end.  "This is our time to give praise to our lord and lady for the bountiful harvest", said the founder of the goddess-oriented coven. He said that 75 inmates have been initiated into the religion since its start in 1981.  That was 28 years ago -- imagine how many prisoners have become part of the coven since then.
But it is not only the prison system that has let these occult and satanic movements begin to thrive.  Our military now recognizes Wiccans as a legitimate religious group, and I have personally seen that evidenced at Fort Sam Houston and Lackland Air Force Base in San Antonio.
Although there is an obvious attempt to mainstream these "religions", we must never lose sight of the fact that modern day witches and satanists still worship demon gods and goddesses, cast spells, practice bizarre and immoral sexual rituals, and certain individuals and groups offer animal and human sacrifices.
Texe Marrs, a controversial New Age researcher, nevertheless offers advice that is hard to ignore:  "Our own research confirms that on this unholy night [Halloween], witches' covens meet, drink, dance, spit out curses and spells, conjure up spirits, engage in sexual orgies, induct new members, and offer up animal and human sacrifices. (Witches have become expert at covering up these sacrifices by use of cremation ovens and the use of privately owned land preserves for disposal of bodies in deeply dug graves.)" 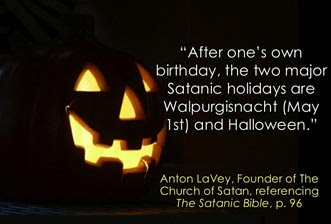 And can you really ignore the boast of Anton LaVey, the founder of the Church of Satan, when he said, "I'm glad that Christian parents let their children worship the devil at least one night out of the year."  Have you ever considered the proliferation of movies such as "Nightmare on Elm Street", "Halloween", the "Friday the 13th" series, the "Saw" franchise, or the glamorization of vampires in the "Twilight" series and "True Blood"?  Have you ever wondered if they were pure fiction -- or if they were created by someone with real knowledge of such horrors?  Are you concerned at all that these kinds of spectacles are desensitizing our kids by their glorification of violence, death, mutilation and gore; and setting them up for the acceptance of real-life satanic rituals?
I know there are some people who will dismiss the warnings about the possible demonic implications of Halloween.  But I think that we do that at the risk of our children.  The celebration of Halloween can be an effective tool to lure them into the occult and/or to become victims of satanic rituals.  Current headlines have certainly shown us that evil and wickedness are on the rise; with more and more lurid stories of bizarre and sadistic rituals happening almost every day.  It will be interesting to see what the headlines reveal in the coming days, as to the unholy celebrations that will be taking place tonight.
In the end, it is up to you to decide what you think about this commonly accepted holiday.  But for me, I know the power that the Enemy wishes to use against us, and I will not only be on guard tonight, but will be praying for protection and authority to thwart his attacks.  Let me leave you with these frightening words from a high priestess of the Church of Satan:  "As a child drawn to darker passions from birth, I always delighted in the fear and fantasies of Halloween. It gives even the most mundane people the opportunity to taste wickedness for one night. They have a chance to dance with the Devil, either stumbling, tittering and nervous in the arms of the Black Prince, or boldly, ravenously sharing in the sensual excesses and fright of others on this magical, unholy night. Now, birth and death have, for me, become inextricably interwoven into this day."