A Clear Misunderstanding Of Biblical Charity

You know that I don't like to engage in partisan politics, and prefer to look at our current political situation through the larger lens of Biblical significance.  But when a particular candidate chooses to misuse the Bible and its teachings to further his political agenda, then I feel warranted to point out where he is mistaken.
Such is the case of Republican candidate and Ohio Governor John Kasich.   I'm not here to debate his conservative credentials, but to point out that he is wrong in equating Government entitlement programs to Biblical charity, or caring for the poor.
In recent weeks, Kasich has been coming under fire for defending the expansion of Medicaid under Obamacare in his state.  Here's how that works:  Medicaid was originally enacted as a safety net to provide health coverage for poor mothers and children.  But the Supreme Court has ruled in favor of Obamacare allowing individual states -- at their discretion -- to expand that coverage to cover able-bodied, working-age adults.  Federal funds will cover the costs of new enrollees, but that funding will start scaling back in 2017.  Moreover, states are on the hook for administrative costs for signing up the new enrollees, whose numbers have far exceeded estimates.  And that's not taking into account all the illegal immigrants we are expecting in the coming months and years!  So, just where do you think these federal funds and administrative costs are going to come from?  You guessed it!  We, the working American people, will be taxed into forced charity!
But here is how Kasich personally justifies that it is our Biblical duty to accept the expansion of Medicaid and other entitlement programs for the poor (and the not-so-poor that take advantage of the system):  “When I get to the pearly gates, I’m going to have an answer for what I’ve done for the poor.”  And he wants you to be forced  to do your charitable part. 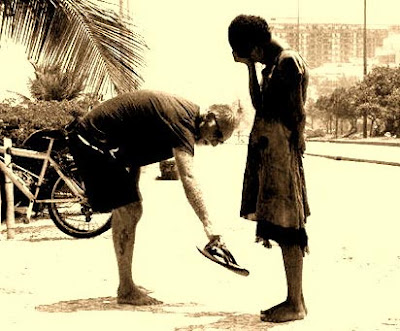 But is that the way the Bible tells us to take care of the poor?  I submit to you that it is not.  The Greek word in the Bible for charity, or alms-giving, is eleémosuné, and it means "compassion, as exercised towards the poor; beneficence."  Jesus is referring to this form of charity in His parable of the sheep and goats (in Matthew 25), where He teaches us that when we see someone hungry, and we give food to that person; or see someone thirsty, and we offer them water, then we are doing the will of God, and caring for the poor and needy as God desires us to do.
Also, the Apostle John asks what good is it if a man claims to have faith, but has no deeds.  The way in which we care for the needy is a reflection of our love for Christ and is evidence of our salvation and the presence of the Holy Spirit within us.
But John Kasich says we have it all wrong!  In fact, he offered to buy Bibles for those of us who might disagree with his position that expanding Medicaid is how we should care for the poor.  He seems to intimate that being a Christian means that you should support the government forcibly confiscating the tax money of other people to help the poor.  I would like to ask Mr. Kasich to consider that perhaps he is the one who misunderstands the teachings of the Bible.
Doesn't the Good Book tell us that it is the individual person’s responsibility to help the poor?  Aren't we encouraged to give, not only out of our own pocket, put as our hearts lead us -- not as the government mandates? As Jesus noted in Matthew 25, it is one of the Christian’s highest responsibilities to give freely and voluntarily out of our own means -- and spirits -- to help the poor.
I mean, for goodness's sake, if Mr. Kasich would take the time to really read his Bible, he would see that Paul gave Timothy detailed instructions for caring for widows in the church, complete with what type of women should be included on the list and warnings about what could happen if charity was given improperly (1 Timothy 5:3-16).  Paul warns against those widows who would take advantage of charity by being self-indulgent and undeserving.  If they had family that could help support them, then the church was not obligated to automatically supply charity; or if they were under 60 years of age, they weren't necessarily entitled to receiving charity because younger widows could easily "learn to be idlers" under an indiscriminate charity program.
Before I go any further, I want to make it clear that, if we are to call ourselves Christian, we are called to help the poor, the widows, and the orphans.  My disagreement with Kasich's definition of charity in no way is to be taken as an excuse for abdicating our responsibilities as followers of Christ.  We are to give to those who are truly in need of our assistance, according to our means; and that is something that you need to discern with the help of the Holy Spirit.
But for politicians to be condescending towards us, and have the audacity to lecture us on our Christian duties, is nothing less than insulting.  To try to shame us into accepting un-Biblical political positions is offensive.  They are no less guilty of being like the Pharisees, who twisted the Scriptures to propagate their political party, to promote a social movement, and to disseminate a particular school of thought in order to rule the people.
In that vein, John Kasich tells us he wants to buy Bibles for his critics in order to silence them.  Perhaps he should read just what the Bible says about the Pharisees in Matthew 23:1-4:  Then Jesus said to the crowds and to his disciples, “The scribes and the Pharisees sit on Moses' seat; so do and observe whatever they tell you, but not the works they do. For they preach, but do not practice.  They tie up heavy burdens, hard to bear, and lay them on people's shoulders, but they themselves are not willing to move them with their finger."  Enough said!

2 Timothy 2:15    "Do your best to present yourself to God as one approved, a worker who has no need to be ashamed, rightly handling the Word of Truth."