The Christian Alternative To Yoga

Some of you may have read of my trepidations about the practice of yoga.  Specifically I have written about it in a blog post on The Daniel Plan, a highly questionable program promoted by Pastor Rick Warren.  The key contributors to this "Christian weight loss plan" include Dr. Mark Hyman, Dr. Daniel Amen and Dr. Mehmet Oz, all who have strong ties to either the New Age movement, or non-Christian faiths.  Specifically, I wrote about Dr. Amen, who allegedly promotes a non-Christian form of meditation known as Kirtan Kriya, which is a 12-minute meditation exercise involving chanting that has its origins in Kundalini yoga.
What is this particular form of yoga?  Kundalini is a type of yoga that attempts to arouse and raise the kundalini, believed to be Shakti or "creative divine energy" which supposedly sleeps in the form of a coiled snake at the base of the spine. It employs pranayama or breathing exercises, visualization, asanas (body poses) and mudras (hand positions) along with chanting and meditation to awaken and then raise the kundalini.  This gets into the promises of  "awakening the third eye", and "gaining the knowledge of God" -- very dangerous ground!
Yet the benefits of yoga are well documented for stretching, and maintaining flexibility and balance as we grow older.  So, are Christians supposed to forego this potentially valuable form of exercise in our efforts to avoid paying homage to false gods or spirits?   Now, I am pleased to tell you that there is a Christian alternative to the spiritually harmful effects of yoga; a way to honor God as we follow a healthy lifestyle.  It is called PraiseMoves, and I'd like to share with you what I have discovered. 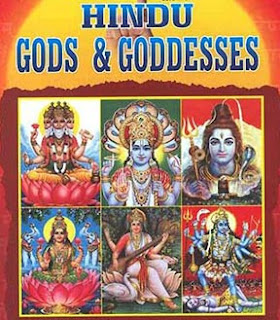 When I went to the website, I was pleasantly surprised to find answers to all the questions that I had.  The organization has documented their position well and shown how traditional poses can become an opportunity to offer praise and worship to Jehovah God.  First of all, they explain why they think there is a need for this Christian alternative.  George P. Alexander, Ph.D., a personal friend of the developer of PraiseMoves, taught World Religions at Biola University and offers some insightful information.  Born in Sri Lanka, George grew up in India, the birthplace of Hinduism and yoga. He informs us that yoga poses are actually offerings to the 330 million Hindu gods.  “Many Westerners who practice yoga today are unaware that the physical positions assumed in yoga symbolize a spiritual act: worshiping one of the many Hindu gods,” Dr. Alexander said.
“To a Hindu, yoga is the outward physical expression of a deep spiritual belief. You cannot separate one from the other," he said.  The natural question is this: Since yoga is tied so strongly to Hinduism, can there be such a thing as “Christian yoga,” or would that be an oxymoron (a contradiction in terms)? Many practicing Hindus as well as Christians agree that since yoga IS Hinduism, the two cannot be combined.  That's why PraiseMoves does not claim to be a form of "Christian Yoga", but rather an alternative.
In fact, one of the PraiseMoves Instructors spent three months on a missionary trip to India several years ago. She said her group often saw people performing yoga poses in front of statues of the gods in the streets! Some brought offerings of flowers, some fruit, some themselves…
In case you think I am making much ado about nothing, let me quote to you from an article entitled “An Open Letter to Evangelicals” from the January 1991 issue of Hinduism Today.  Swami Sivasiva Palani writes: “A small army of yoga missionaries – hatha, raja, siddha and kundalini – beautifully trained in the last 10 years, is about to set upon the western world. They may not call themselves Hindu, but Hindus know where yoga came from and where it goes... We hope this proves useful to you. I close with a quote from Swami Vivekananda, Hinduism’s greatest modern missionary, spoken in January of 1895, ‘What I now want is a band of fiery missionaries.’ It’s a hundred years late. But it appears he’s going to get his wish.”
Besides these historical evidences, the developer of PraiseMoves, Laurette Willis, clearly states from her own experiences and those of many she knew while in the New Age movement, yoga class was the door that led them into the New Age Movement.  Now she wants to close that door and offer an alternative to Christians who are looking for a healthy lifestyle.  So how does PraiseMoves work, and how does it remove itself from the Hindu influence, while honoring God?
PraiseMoves is a series of stretching and strength-building postures, each linked to a verse of Scripture focused upon while doing the posture.  For example, during The Angel posture, people meditate upon or speak aloud Psalm 91:11, “For He shall give His angels charge over you to keep you in all your ways.”  The foundational scripture of the PraiseMoves organization is “For you were bought at a price, therefore glorify God in your body and in your spirit, which are God’s”  (First Corinthians 6:20).  The goal is to not only build strength, flexibility and balance in our bodies; but to also be “transformed by the renewing of (our) minds” on the Word of God (Romans 12:2), nourishing spirits and praising the Lord through His Word. 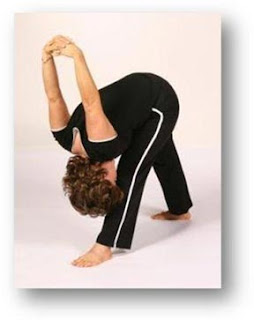 At right, Laurette demonstrates The Angel Bow, great for balance, stretching the shoulders, spine and hamstrings. The scripture they meditate upon or speak aloud: “At the name of Jesus every knee should bow, of those in heaven, and of those on earth, and of those under the earth, and that every tongue should confess that Jesus Christ is Lord, to the glory of God the Father” (Philippians 2:10-11).
An obvious comment is, “But wait a second, these postures sure look a lot like yoga poses.”  Yes, they do, but the developers of PraiseMoves believe that the postures are NOT the foundation of PraiseMoves. The Word of God, as found in the Bible is the foundation. The exercises are the “witty invention” to get you more into the Word, and to get more of the Word into you!  The moves may be similar to yoga, but the God to whom you are committing a spiritual act is totally different!  You are worshipping the one true God of the Universe, and not practicing some ancient praise to a foreign God.
And in keeping with PraiseMoves commitment and Statement of Faith, there are certain poses and gestures that will NOT be done in PraiseMoves because of their appearance and close association with other religions.  For example, did you know that the so-called “Praying Hands” gesture (putting one’s palms together with fingers pointing upward) is a mudra (Hindu prayer gesture) which pre-dates Christianity?  So, even though we love the paintings of the little children with their hands in that position while kneeling beside their beds saying, “Now I lay me down to sleep…” it is still too closely linked with the Hindu “Namaste” greeting (“I bow to the ‘divine’ within you”) and other Eastern religious practices, that PraiseMoves chooses not to imitate that pose.
In a final, yet inconclusive, analysis of the PraiseMoves organization and exercise program, I found it to be authentic, spiritual, committed to the Bible and a solid Christian foundation.  The testimonies from those who enjoy this program is commendable.  And I urge you to check out the website and all of its associated links.  I think you will be amazed at the message of this organization and their credibility.

Romans 12:1   "Therefore, I urge you, brothers and sisters, in view of God's mercy, to offer your bodies as a living sacrifice, holy and pleasing to God--this is your true and proper worship."