If We Could Erase Time... 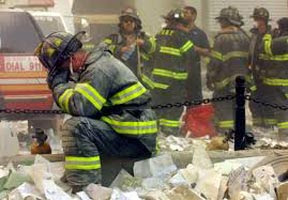 How many remember exactly where you were fourteen years ago this morning?  Every American over the age of 25 most likely has a distinct memory of that tragic day ... the ash-colored faces of panicking people rushing to escape the falling Towers behind them; the grief-stricken families wandering the streets of New York City in the aftermath, holding photos of their loved ones and hoping beyond hope that someone would tell them their son/daughter/father/mother/spouse had been spotted among the injured; the images of NYC firefighters atop mountains of rubble continuing to do their jobs after 343 of their comrades died trying to rescue those trapped in the buildings.
Sadly, there is a generation of children growing up who don't remember; and for most of them, this all seems like ancient history.  They have lived their entire lives in the effects, results, and consequences of that horrific day, yet they have no emotional connection to the nearly 3,000 Americans who perished that day.  And there are the peripheral statistics:  the documented 863 firefighters and ambulance workers with cancers certified as relating to their work on September 11 2001 (although Mount Sinai Hospital's World Trade Center Health Program -- which is run for police officers, construction workers, sanitation staff and other New York City employees and volunteers -- reports it is treating 1,655 patients with cancer out of the 37,000 who worked at the site of the 9/11 attacks).
And we mustn't forget the nearly 6,650 Americans who have died in the ensuing Afghanistan and Iraq Wars, along with the more than 50,000 wounded troops -- 16,000 of them so seriously that they would certainly have died had they suffered an equivalent wound in any prior conflict.  It has been suggested that nearly 1/5 of all military personnel who served in the Middle East since 9/11 suffer from some form of PTSD.
All this is the aftermath of that terrible day.  Is there any remnant of what we used to be before?  And how many of us would like to turn back the clock and live in a simpler America; one less adorned with the complexities of what modern America has become, and in a way that is reminiscent of bygone days?  Unfortunately, we can't erase time, but I'm happy to say that my Godson, Hunter, is able to experience a piece of that picturesque Americana. 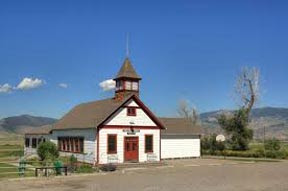 You see, Hunter will be six years old this fall, and he just started Kindergarten at Pine Creek School in Montana.  This small, rural school is similar to the old one-room school house; although in reality, it consists of three rooms.  Kindergarten through Second Grade comprise one room, and Grades 3-5 and 6-8 take up class in the other two rooms.  This year Hunter is one of only 4 Kindergartners, and there are no 8th Graders for the 2015-16 school year.
The original Pine Creek School held its first class in 1893, and the school building was made of logs.  It has been updated and upgraded in the years since.  Up until the 1950’s there was an outhouse, no running water, a wood burning stove, and kerosene lamps for light.  Sometime in the 50's the school acquired a well, bathrooms in the basement, electricity, and finally an oil burning furnace, which was a blessing till it belched and covered the schoolrooms in soot.
While Pine Creek School is the picture postcard of a rural school from a bygone era, it is thriving in 21st Century America.   Even though there are only three teachers, plus some part time professionals, it functions as a modern K-8 education system.  As of 2014, Pine Creek School has ten top-of-the-line, i7,  all-in-one,  touch screen computers with a dedicated internet connection, along with iPads and laptops, as well as a collegiate connection in educational technology.
Pine Creek may be a throwback to earlier rural education models, but it is co-developing curriculum and implementing the Next Generation Science Standards with the current Montana Science standards, and working with the Montana Outdoor Science School.   This small rural school is determined to navigate into a leadership role in educating its students in Science, Technology, Engineering & Math (STEM).
Yet Hunter will have the old-fashioned benefits that many city-educated kids will never know.  Learning in a classroom with older kids, I suspect he will be motivated and challenged by listening to the older kids studying their lessons.  If he excels beyond his grade level, he will be seamlessly integrated into the lesson plans for the higher grades.  Likewise, if a fellow student can't quite keep up, he will be allowed to continue studying with the lower grades until he becomes academically proficient for that grade's requirements.  In this manner, students are not overtly singled out as being smarter or slower than others.  They all work at the pace they can accomplish, and receive individual attention by the teacher(s). 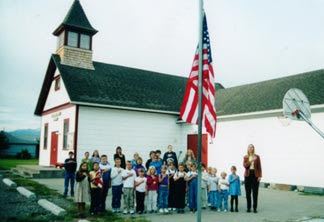 But here's the part I really love .... each morning the entire school gathers on the playground and faces the flag.  They place their hand over their heart and recite the Pledge of Allegiance together.  They say "one nation under God" (although Hunter says, "one nation under Jesus and God"), and they do it with pride and conviction.  There's no room for political correctness at Pine Creek School!
Each day Hunter and the other kids go outside to play at recess, and they are already forming a community... the older kids looking out for the younger, and all of them sharing a unique identity associated with this rare and exceptional experience.  Most of the kids come from surrounding ranches and the rural countryside, and I suspect there won't be any concerns about disrespect towards each other or the teachers.  In fact, Hunter's teacher has already commented to his mom that she was delighted when Hunter answered "Please" and "Yes, Ma'am" on his first day of school.
The principal reported that Hunter was "polite, and interested in the environment and the safety of the other kids".  (His mom and I laughed about that because we know that he is as rough and tumble as they come, and there might be future calls from the principal that relate to another side of this thoroughly rowdy ranch kid).  But at least I don't think that this school system will try to change who he is.  I am thrilled (and a little jealous) that Hunter is able to experience this nearly extinct chapter in American education.  As I worry about the level of education that our kids are getting in the modern school system, I know that Hunter is getting the best ... an educational experience that is suited to his curious and demanding mind; a respect for what it means to be an American citizen; and the kinds of friendships that will last for a lifetime.
We mustn't forget the significance of this historic day.  It is burned into the souls of Americans who lived the nightmare that was 9/11.  I pray that Hunter will not have to experience any thing close to that tragedy, but no matter what lies ahead of him, he will have a foundation built on the historic values of one-room school houses and those who attended them before him.  He is inheriting the philosophy of the one-room schoolhouse, which stressed family involvement.  It stressed helping one another, and there was a sense of belonging to one place, and "this is our place."  We can't turn back time, no matter how much we care to.  September 11, 2001 stripped away much of our nation's innocence, but it's nice to know that there are still oases where our traditional values are still honored and appreciated.  And for that, I'm grateful this day.

2 Thessalonians 2:15:  "So then, brothers, stand firm and hold to the traditions that you were taught by us, either by our spoken word or by our letter."

Email ThisBlogThis!Share to TwitterShare to FacebookShare to Pinterest
Labels: History, Our Youth, Values