Let's Call It What It Is! 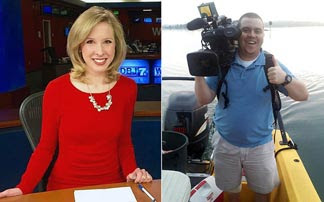 The nation is reeling from the execution style murders of two promising young people in the news industry.  Alison Parker and Adam Ward were gunned down on live TV by a disgruntled ex-employee of the TV station at which they both worked.  Mental illness is the alleged reason behind the murders, but as to be expected, the issue of gun control is once again front and center.
Please understand that I mean no disrespect to the victims, nor is it my intention to make their deaths appear less tragic than they are.  But in our society's need to find an explanation for such depraved actions, the combination of mental illness and guns has become the go-to source of blame.  But this premise just keeps taking us in the same circular argument, resulting in the same false justification.  Here's how the argument plays out ... guns in the hands of the mentally ill are a problem; so we need to close the "gun show" loophole of no background check; and more gun laws need to be written to make it more difficult for people to buy guns.
As so often happens, that argument doesn't work in this instance, nor many others.  The murderer bought the gun legally, having passed a background check.  Did mental illness play a part in these murders?  From everything I've read and heard, it cannot be dismissed.  So we just keep trotting out the same old tired playbook ... a gun in the hand of a mentally ill person is the cause of two more tragic deaths.
But what we don't talk about is what is really at the root of these senseless murders.  It's called EVIL.  It's the consequences of a wicked action or deed.  What we humans refuse to acknowledge is that a sovereign God created a universe governed by a moral order.  For some reason, we deny the existence of a real force of evil -- a darkness -- that is out to destroy what God has made.  As a nation, it is hard to ignore that we have done darn near everything we could to remove God's influence and presence from this land.  What we haven't quite realized is that when He purposely gives us what we want, and withdraws His powerful hand, there is a tangible vacuum created.  His goodness no longer pervades our relationships and we have a situation where peace, virtue, and decency no longer reside.  Evil is only too happy to fill that empty space.  That is the truth.
That is why bad things happen to good people such as Alison and Adam.  It's not because guns are at the root of the problem.  They are just the instruments of Evil.  If not a gun, then the murderer could have used a hammer, or run them over with a car, or choked them with his own hands, or used a sword to behead them.  All of those things are equal instruments when they result in the same outcome... death.
We need to focus on eradicating Evil in our lives, not the tool it uses to carry out its goal.  We need  to lay the blame at the feet of the real perpetrator, the Prince of Evil.  Yes, the devil can use (and often cause) mental illness to be the impetus for someone to act out in evil ways, but then we are limiting our discussion to the by-product of evil, rather than the root cause.
While arguments for more mental health screenings and more gun control are convenient foils for the Enemy, and help him to continue his spiritual war against God's creation, we must not forget that there are very real physical ramifications for this line of reasoning as well.  If mental health becomes the alarm factor that precipitates tighter gun control and harsher laws, how will that affect our returning veterans who suffer from PTSD?  We can already see the hand-writing on the wall, can't we?  These brave men and women who have been trained to handle weapons might soon be victims themselves of over-regulation and a corrupt screening process that denies them their Second Amendment rights.
The bottom line is that we are in danger of letting Evil win.  And the devil is certainly using everything he has at his fingertips to shout his victory.  Whether our rapid advances in technology have come from Satan and his servants is, I think, a valid argument to have.  But even if you disagree, technology surely served to spread the horror of Evil as the shooting was carried out live on air, and then re-broadcast to every cell phone that gets news feeds.  I'd say that technology is a perfect marketing tool for the devil to glorify his evil ways, wouldn't you?
So, what are we to do?  The only way to rise up against this supernatural force is to embrace Jesus as the way to defeat it, and then to follow His advice.  How do you defeat Evil?  "You triumph over Evil with Good."  That is what happened at the Cross.  And for every evil deed that is broadcast across our land and the world, we need to use every means possible to exalt the evidence of God and His goodness, and give Him credit.  We must let God reign once again in our lives and in the heart of this nation.

Proverbs 14:22    "Will they not go astray who devise evil? But kindness and truth will be to those who devise good."
Posted by Pam Kohler at 7:00 AM