What Constitutes A "Link"? 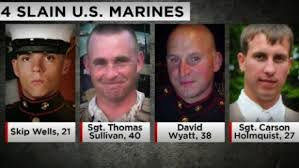 Once again our nation mourns the death of innocent citizens at the hands of someone with a radicalized agenda.  This time it seems as if our military was specifically targeted in Chattanooga, TN.  Yet, early statements by the FBI, which is investigating the attack, has stated that so far they had not established a link with terrorism.  Can someone explain that to me, please?  Because my understanding of a link is that it means there is some kind of connection, or an association, or a relationship between two things or situations or people; where one thing affects the other.
So how is there not a "link" between the killer and terrorism in the wake of warnings that ISIS is calling for attacks against military personnel and installations?  And isn't there a link when the murderer blogs that life is a test "designed to separate the inhabitants of Paradise from the inhabitants of Hellfire"?  And, finally, isn't it reasonable to establish that there is some kind of connection when the Islamic State organization has publicly tweeted that we "American dogs will see wonders in Chattanooga"?
I mean, look how little time it took the authorities to link the Charleston killer to the Confederate flag and label him a "domestic terrorist" motivated by his racist hate.  If the Charleston killer can be accused of being inspired by the "ideology of the Confederate South", why is it not reasonable to consider that the Chattanooga killer could have been "inspired" by the ideology of radical Islamists? If that is an acceptable explanation for the deaths in Charleston, how are the deaths in Chattanooga any different?  Until those who are elected to protect the nation are willing to face the truth of who our enemy is, then we are left defenseless against future attacks.  How can we defeat an enemy we are not willing to name?
Already, there are hints of other possible "motives".  One profile of the killer paints him as a victim of "Islamophobia"; that somehow he was made keenly sensitive to the unfair slights against his religion and had become a victim of America's irrational fear of the Islamic faith.  These reports are now citing his sister's claim that she had faced discrimination and harassment at their high school because she wore a hijab.  She argues that "There’s this misconception that Islam is a violent religion. Muslims are actually peaceful."  Yes, some Muslims are peaceful.  But how can she deny that the Muslims and followers of Islam that have dominated the headlines over the last year with their endless beheadings and reign of terror are peaceful?  There has to be some honesty in this debate, and the truth is that many Muslims have radicalized their faith and are terrorists.  When you dance in the streets and call for "death to America", you are not peaceful.  Just because ALL Muslims have not taken the terrorist route, doesn't mean you can say NONE of them have!
I find it so hypocritical that anytime an extremist Christian (and yes, extremists exist in all faiths) commits some abhorrent crime, the media and politicians are quick to rush to the microphone and point out how flawed, intolerant, hate-filled, and evil Christianity is.  But the only adjective that they want to apply to Islam is "peaceful".  When Islamic nations are labeled as "state sponsors of terror", then isn't it rational and logical to consider a "link" between these murderers and terrorism?
As of yesterday afternoon, the narrative (at least on the ground in Tennessee) appeared to be changing.   Bill Killian, the U.S. Attorney for the Eastern District of Tennessee, announced that, along with the FBI Joint Terrorism Task Force, the "active shooter situation will continue to be investigated as a terrorist act, until the evidence proves otherwise.  We will let the facts take us where they lead us."  I pray they will be allowed to do just that, and that the truth will be shared with the American public.  That being said, I'm a little concerned that there is a verbal shell game being played.   I was a little puzzled with the attempts of the investigating team to mollify the public by insinuating a generic meaning to the word "terrorism", while warning that we not get "hung up" on getting specific as to what type of terrorism it is.  Is this the beginning of politically correct speech about the term "terrorism"?
All we know for sure is that the investigation of this tragic situation is just beginning to unfold.  But as an American who emphatically supports our military personnel, I am heartbroken and weary of seeing our soldiers restricted from defending themselves by "gun-free zones".  How many Fort Hoods, and Washington Navy Yards, and Marine Recruitment Centers is it going to take before our military members are allowed to defend themselves?  It is unconscionable that they are made to act like sitting ducks!  As long as this insane policy continues, people will die.  Let there be an end to this madness and let the truth be declared!

Psalm 5:6    "You destroy those who speak lies; the Lord abhors the bloodthirsty and deceitful man."