It's The Devil, People! 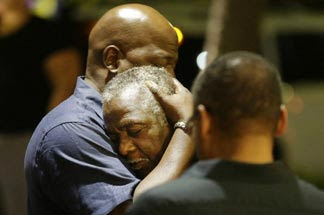 The heart of the nation is reeling in grief at the violence against God's people in a church in South Carolina.  Nine saints were targeted and persecuted as they communed with Jesus in prayer.  Yes, you read that correctly ... I do not see this evil in terms of race or politics or social issues.  I am not like those who wish to lay this crime at the feet of racial prejudice; or who want to point to the fact that the perpetrator used a gun, or that his front license plate sported a Confederate flag --- all convenient charges for those who view this tragedy through a narrow lens.
No, I see it through a spiritual lens; and that means it is bigger than our small earthly minds can see.  I will agree that it is a crime of "hate", but the hatred is at the behest of the Prince of this World.    You see, the Devil hates God and His plan for the world, and it is his goal to oppose God, Jesus, and those who belong to them; and he will use whatever method makes it easy to lead people into rebellion against God's chosen people.
As God reveals more to me about spiritual warfare, I am learning that so much in our daily lives opens us to spiritual wickedness.  Our spirits may be sealed with the Holy Spirit, but our souls (our minds, emotions, and wills) and flesh can still be subject to influence by Satan.  On a benign level, I know that there have been times that my mind reels with doubt and fear, and I know those are not from God, but from the Enemy.  Or what about the times my mouth has gotten me into trouble, when I clearly knew that I was disobeying God?  So, just contemplate how easily it would be for someone who doesn't know Christ to be "hijacked", so to speak, to do the bidding of the Devil?
There are things that we do, or that happen to us, that open up opportunities for Satan to tempt us into evil.  Among them are adultery, abortion, abuse, depression, poverty, addiction to drugs or alcohol, divorce, the occult ... and on and on.  All these situations (and more) can open the door for the Enemy to enter our lives.  These experiences give him legal right to be there, because he is the Prince of this World and these are experiences that occur in this realm.  But, as Christians, we have the authority to deny him access to our souls; we are filled with the Holy Spirit and can shut those doors! 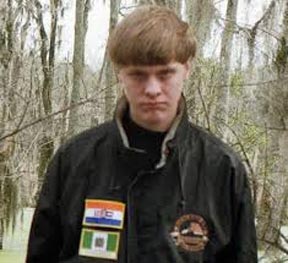 I do not see any evidence that Dylann Roof, the murderer in Charleston, South Carolina, knew Jesus or the Holy Spirit.  His presence in that Bible study at the Emanuel AME Church simply shows me that he was there on assignment for the Devil.  And from the early reports on his background, Satan certainly had open doors to influence this young man.  To begin with, Dylann was caught in the middle of a divisive child custody case during his parents' divorce.  There is Satan's opportunity to introduce spirits of rejection, fear of rejection, and self-rejection.
Secondly, Dylann has an arrest record involving possession of suboxone, a narcotic painkiller.  In the aftermath of this tragedy, people are now coming out with their own stories of the side-effects of this opiate drug.  A user on one website relates how her husband “became violent, smashing things and threatening me,” after just a few days of coming off suboxone.  Another person who posted relates the story of how his personality completely changed as a result of taking suboxone.  "Nasty", "Violent", "Self-Destruct Mode" are just some of the other descriptions associated with this drug.
It is important to understand that drugs are one of the open doors through which Satan can influence us.  Did you know that there is actually a spirit of Pharmakeia mentioned in the Bible?  The English translations often use the word "sorcery"; whereas the Greek translation is "pharmakeia", from which we get "pharmaceuticals".  Just consider this relevant passage in Revelation 18:23: “The light of a lamp shall not shine in you anymore, and the voice of bridegroom and bride shall not be heard in you anymore. For your merchants were the great men of the earth, for by your sorcery all the nations were deceived.”
Big Pharma can certainly be classified as a great merchant in the 21st century, and the prodigious use of drugs in this country (and the world) cannot be denied.  How convenient for Satan to use both the spirits of rejection and pharmakeia to seduce and deceive Dylann Roof into snuffing out the light of God's lamp (the Emanual AME Church)!
It will be interesting to see how much comes out about this young man's life in the coming days.  While the media, and the race-baiters, and the gun-control advocates will point us all to the obvious differences in skin color between the murderer and his victims, as well as the need to "stop the gun violence", I refuse to reduce this tragedy to a convenient agenda that some of our leaders wish to take advantage of.
Just like the troubled young men of Columbine, Aurora, Tucson, and Sandy Hook, Dylann Roof is just the latest in a group of glassy-eyed, vulnerable youth whose empty souls were easily occupied and exploited for Satan's gain.
While my heart is saddened at the loss of such faithful followers of Christ, I rejoice that they were in prayer with their Savior when their tragic deaths came.  Now it is time for us all to pray that Satan will be restrained by the Holy Spirit from gaining anymore success from his latest attack.  Let's pray that the hatred, discord, and selfish ambition that Satan will attempt to reap from this tragedy will be covered over by the Love, Faithfulness, and Self-Control that radiates from Jesus Christ.
It is so important that we Christians come to realize that our thoughts and actions can give legal authority to Satan to wage his battle against God and the Saints.  Don't keep your focus on what appears to be happening here on earth; but look towards the spiritual realm and the war that is really taking place.  We must recognize what is truly going on and not give the Devil any more ground or territory, and get in the spiritual battle!