With all the evil and bad news in the world, it is time to share an inspirational story -- it's a short story, but one with deep significance.  And it involves the innocence and purity of heart that belongs to a child.  You may have already heard or read this account, and if so, read it again and start your week by basking in the glow of this child's example.

Ava Faulk said her son Josiah Duncan, 5, wouldn't stop asking her questions when he spotted a disheveled man holding a bag with his bike outside the Waffle House restaurant in Prattville, Alabama.  When Faulk explained the man was homeless, little Josiah asked "What does that mean?" Faulk told Josiah that it meant he didn't have a home, to which her son responded, "Where is his house? Where is his family? Where does he keep his groceries?"
But Josiah was most concerned that the stranger didn't have any food, and he begged his mother to buy the man a meal at the restaurant. The mother agreed, but when the man sat down at the restaurant and "nobody really waited on him", Josiah decided to take matters into his own hands.
He "jumped up" and asked the man if he needed a menu, telling him "you can't order without one", Faulk said. When the man insisted he would be fine with a simple cheeseburger, Faulk made sure he knew he could have anything he wanted.  The mother remembers that, when he asked if he could have bacon, she told him "get as much bacon as you want".
And before the man could dig in, Josiah said he wanted to "say the blessing with him", singing loud enough for the other 11 customers in the restaurant to hear... "God our Father, God our Father, we thank you, we thank you," he sang. "For our many blessings, for our many blessings, Amen, Amen."
"The man cried. I cried. Everybody cried," Faulk admitted.  It's a moment the mother said she will never forget.  ""You never know who the angel on Earth is, and when the opportunity comes you should never walk away from it," she said.  "Watching my son touch the 11 people in that Waffle House tonight will be forever one of the greatest accomplishments as a parent I'll ever get to witness." 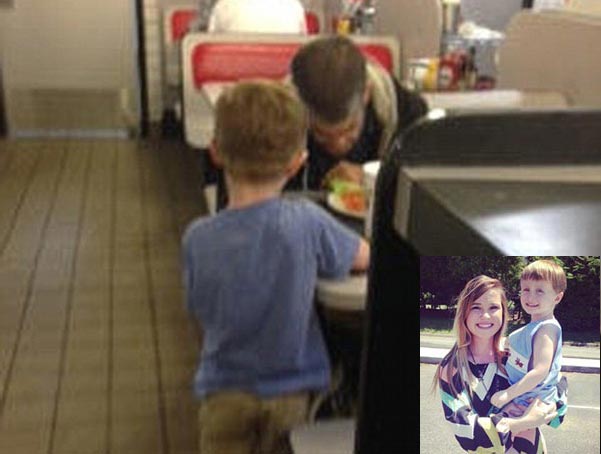 Here we have an image of the Good Samaritan, and the heart of Jesus's message to "love your neighbor as yourself" -- all rolled into the loving gesture of 5-year-old Josiah.  This child saw the need of a stranger and met it; without prejudice or preconceived ideas of the homeless man.
While we applaud Josiah's selfless act, let's not forget his mother, Ava.  Children watch and listen to their parents.  She obviously had practiced such caring and giving acts, herself.  Somewhere in his short lifespan, she had shown her child her own heart towards others, and it resulted in Josiah's curiosity about the homeless man.
But let's take it one step further ... how many other mother's would have hushed their child's inquisitiveness and walked right by the man?  Would you have invited him in to the restaurant to share your table with you and your young child?  Yes, this young mother deserves as much accolades as her precious son; for, one day in heaven, the Crown of Life will be bestowed on the heads of she and her child.  They have obviously partaken of the "living water" and the "bread of life" that are our Savior, Jesus Christ, and they offered them to a complete stranger.  Whether that homeless man was an angel or not, didn't matter.  They gave out of pure love for their fellow man.  God bless them!

Thank you to WSFA-TV, Montgomery, Alabama for the details on this inspirational story.

Proverbs 1:8-9    "Hear, my son, your father's instruction and do not forsake your mother's teaching; Indeed, they are a graceful wreath to your head and ornaments about your neck.…"