Why Has It Taken This Long? 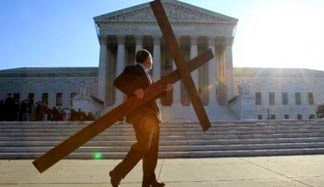 I viewed a decision by our nation's prominent religious leaders to openly declare that they are ready to enact "Civil Disobedience" with a bit of consternation.  On the one hand, I applaud their bold move to stand in opposition to the Supreme Court, should that august body decide to make same-sex marriage legal across the land.  On the other hand, I am left wondering why now, and why this issue?
A veritable Who's Who of religious notoriety and distinction signed a pledge, which states in part, "While there are many things we can endure, redefining marriage is so fundamental to the natural order and the common good that this is the line we must draw and one we cannot and will not cross."
Everyone from newly announced Presidential candidate Mike Huckabee, to Reverend Franklin Graham, Pastor John Hagee, U.S. Senator Rick Santorum, James Dobson, and the founder of Liberty Counsel, Mat Staver, have signed on.  Their stated purpose is to send a strong message to the Supreme Court (or any court in the country) that they will oppose elevating same-sex marriage to a protected legal stance, engaging in "peaceful resistance against unjust laws and unjust rulings."
They want it known that they fear the legalization of same-sex marriage will transform the face of society and will result in the “beginning of the end of Western Civilization.”  Furthermore, “We have no choice,” Staver is quoted as saying. “We cannot compromise our clear biblical convictions, our religious convictions."  Supposedly, they have stated that they are willing "to resist [the Supreme Court decision on same-sex marriage] as much as Martin Luther King, Jr. resisted unjust laws in his time."  Now, that's a pretty big commitment.
So here's my concern ... why hasn't this stand been taken for the issue of abortion?  Why haven't we heard their outcry over late-term abortions, or of the issue of abortion, itself?  Hasn't abortion transformed the face of society, and I think a good argument could be made that it is leading us to the end of Western Civilization.
I want to believe that their motives are pure ... I really do!  But, as an article on the website News With Views, pointed out, these are all very wealthy and comfortable men who have had the means and the positions to fight for their "convictions" for a very long time.  They have boldly declared WE WILL NOT OBEY ... but are they willing to follow through?  And why has it taken them this long to come to that conclusion?
Are they willing to go to jail as Dr. King did?  Are they willing to face harassment and persecution and loss of income and status for their cause?  Can they see themselves following in the footsteps of John the Baptist, or Peter or Paul?  Or is it as German Pastor Dietrich Bonhoeffer noted during his pre-WW II visit that the American Church lacked leadership which had any knowledge of true suffering.  Our nation's prosperity has spawned mega-churches and million dollar corporations, all clothed in 501(c)3 protective raiment.
Are these men willing to forego their soft and comfortable positions to get down in the trenches of real Biblical battle?  Are they willing to contemplate Jesus's words in Matthew 11:7-8?  Scripture says, "Then as these men went their way, Jesus began to speak to the crowds about John: What did you go out in the wilderness (desert) to see? A reed swayed by the wind?  What did you go out to see then? A man clothed in soft garments? Behold, those who wear soft clothing are in the houses of kings."
Was He intimating that John the Baptist's coarse and rough clothing showed that he was dead to all the pageantry of the world and the pleasures of the senses; that his clothing agreed with the wilderness he lived in?  Could we say that his appearance was consistent with his character and how he viewed his position and how he was to conduct his ministry?  If so, what does that say about how today's religious leaders have conducted their commission to spread the Gospel?  Have they relied too heavily on their connections with political figures, and cast their lot and organizations' funds on campaign contributions in the hopes of influencing the culture through political means?  Or are we going to find that they are simply too comfortable in their soft and plush clothes, and in the company of the kings of our day?
Forgive me for being so cynical, but to my mind, there have been far too many years, and millions of aborted babies, that deserved such a call for "civil disobedience".  Perhaps if this approach had been considered in the 1970s, we wouldn't even be talking about same-sex marriage.  So, I guess I can accept "better late than never", but my natural skepticism tells me not to get too excited.  Are these wealthy pastors and religious leaders really willing to get dirty in a fight that may ask them to sacrifice all they own and are?  What will be the fruit of their actions?  Are they willing to go as far as  John the Baptist, Peter, Paul, or Martin Luther King?  I guess we will see ....

Email ThisBlogThis!Share to TwitterShare to FacebookShare to Pinterest
Labels: Abortion, Faith, Law and Order, The Church