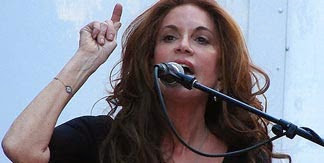 Whether you agree with her methods or not, one must certainly give Pamela Geller credit for making Sharia law in America come out of the shadows.  The outspoken and controversial political activist has been known for her opinions on radical Islam and the politicization of Islam.  She has become a tireless spokeswoman against "creeping Sharia" in our country, which has resulted in her being labeled anti-Islamic and Islamophobic by the media and pundits on both sides of the political spectrum.  Geller is a Jewish American, and her pro-Israel stance has also made her a target of anti-semitic critics.
All that being said, she is not averse to public and heated disagreement when it comes to getting her message across: Sharia law is dangerous, and has no place in the American judicial system.  She asserts that Shariah law is different from the theological constructs governing other faiths, claiming that canon law only applies to Catholics and Jewish law only governs Jewish people; she said that Shariah law differs in that it “asserts its authority over non-Muslims” as well.  Her continued campaign to shine a spotlight on the dangers of making concessions to Sharia in the name of "tolerance" and "inclusivity" in order to appease radical Muslims, has kept her message on the fringes ... no media pundits or outlets would take her seriously or give her air time to present her views.
To be honest, it is tough to applaud her decision to hold a contest mocking the prophet Muhammad.  There is no one who would say she didn't expect a violent outcome.  And I have heard others remark that there were other ways to achieve her goals.  But can you suggest another way that would have forced all the news corporations to cover the fallout of her decision; or that would have forced a discussion of the full ramifications of Sharia Law into the public forum?  Is anyone focusing on the fact that two men were compelled to try to kill her, or others, in the name of jihad?
Who has not seen or heard radical cleric Anjem Choudary's call for Ms. Geller to be put before a Sharia court and receive the full penalty for facilitating such offensive cartoons, “and if found guilty, of course, she would face capital punishment.”  Did you get that?  In the United States of America, you have a religious cleric promoting a sentence of death for exercising the right of free speech that this country prizes so much!  What a gross misrepresentation of what our justice system is all about!
You might think that her methods were crude and in poor taste, but ultimately, she accomplished her goal: pointing out that Islamic Sharia law goes against everything this country stands for.  What's more, the mask has been pulled off, and the public has a clear view of how Sharia restricts and obstructs freedom.
I want to be clear; I don't agree with everything that Pam Geller stands for.  She is "socially liberal" in her support of abortion legalization and same-sex marriages.  She is a theist who defends the Judeo-Christian ethical tradition, but I can find no evidence of a declared faith.  But she is a stalwart defender of free speech as a protection against tyranny, and is unafraid to provoke or offend in order to prove a point.  In response to critics who disapprove of her event in Garland, Texas this last week, her response is unapologetic:  “There is no automatic or unavoidable response to being insulted. No one is forced to kill for being insulted,” she said. “Those who choose to do so are responsible for their actions. No one else is.”
Then there are those who find her methods too offensive and controversial.  And I would dare say that many of our church leaders would shy away from confronting the religion of Islam and Sharia law because they don't want to offend.  But by avoiding the subject, do they then lack any credibility and/or influence?  Think about Jesus and how He made his point in the public arena!
People either loved Him, or loved to hate Him.  He wasn't afraid to offend the religious leaders of His day, the Pharisees; nor stand up to the political rule of the Romans.  The crowds flocked to Him because of the things He said and did; yet, they also loved to argue with Him and accuse Him of blasphemy and consorting with the Devil.  His methods were certainly controversial for the day, and He was a threat to the accepted practices of His time.  But He was willing to draw attention to Himself in order to shine a light on truths that needed to be revealed.
Now, Pamela Geller is no Savior of the world, but she understands that if you want to be heard, you sometimes have to be willing to be bold, be criticized, and be willing to be misunderstood -- all in order to draw attention to your cause and make people think for themselves.  Whether she was courageous or irresponsible, the debate that her event has engendered may well wake up America to the danger that lies within.  May God use it for His glory!

Jeremiah 17:10    “I, the Lord, search the heart and test the mind, to give every man according to his ways, according to the fruit of his deeds.”