Scientists and Sin: What They Don't Understand 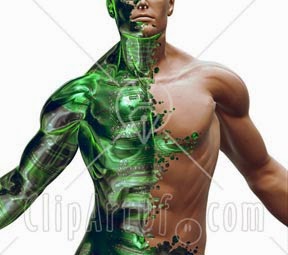 In light of yesterday's post, I just want to point out the obvious.  Now that the futurists and scientists are gleefully clapping their hands over the emergence of Artificial Intelligence (AI) as a powerful possibility for the human race, they are contemplating a new reality and philosophical question ... what if AI decides to turn on its creators; and can it be pre-programmed to make moral and ethical decisions?  Will it be responsible for its actions?
Hmmm, don't those considerations sound, well, distinctly "human"?  Is the Intelligentsia unknowingly coming into conflict with what we Christians innately know as flaws in our human nature ... Sin?  Could it be that even if they are able to create a "being" that is as much computer as it is human, they cannot escape the inevitable sins that serve to endanger the existence of not only the created robots, but their human creators, as well?
Secularists and Scientists and Skeptics, through medicine and philosophy, have tried to cure humanity of the pesky reality called "sin" for several generations now.  Moral relativism and Atheism have done their best to convince society that God is unnecessary, and we are capable of managing ourselves and plotting our own future.  Just in the last 100 years, we have had two World Wars, countless regional conflicts, and at least 7 attempted genocides resulting in nearly 18,000,000 deaths  (Armenians in Turkey; Stalin's forced famine; the Japanese atrocities at Nanking; the Nazi Holocaust; Pol Pot in Cambodia; Rwanda; and Bosnia-Herzegovina) ... so how has that worked for us?  Do they really think if they create drones that can decide for themselves when to pull the trigger, that it will result in a better outcome?  Or that they can avoid that annoying certainty called "death" by developing ways to isolate our brains from our decaying bodies?  If they only knew how disdainfully their Creator looks upon their schemes.
There is no better description of the vanity of man and the depravity of human nature, than that described by David in the Bible:  The fool says in his heart, “There is no God.” They are corrupt, they do abominable deeds, there is none who does good. The Lord looks down from heaven on the children of man, to see if there are any who understand, who seek after God. They have all turned aside; together they have become corrupt; there is none who does good, not even one. Have they no knowledge, all the evildoers who eat up my people as they eat bread and do not call upon the Lord?  (Psalm 1-4).
Yet, it is amazing to me how safe and secure these small "c" creators feel in their godless world.  They do not see their wickedness, their folly, or the danger they are in.  They are what the Bible calls "workers of iniquity".  As the noted theologian Matthew Henry describes them:  "they design it, they practice it, and take as much pleasure in it as ever any man did in his business."  They refuse to acknowledge the role God plays in His Universe, and their view of themselves as superior in the knowledge of what the future holds, only serves to showcase their blind and selfish motivations, as well as their utter foolishness. They mock God and they have no idea of the eternal danger in which they have placed their souls.
But wait ... they aren't interested in "souls", are they?  After all, they are trying to redesign human existence and remove the "spirit" component from the human mind/body/spirit bond, which was made in God's image.  Yet, they will one day learn that those who refuse to fear God will reap the rewards of their folly.  They, who refused to admit His existence; who saw themselves above His Righteous Judgment and Sovereignty, and felt capable of creating their own eternity, will stand in awe and abject terror at what their pride has cost them.  Oh, they will experience eternity, alright -- it just won't be where, or when, or how they convinced themselves it would be.

Proverbs 17:24    "The discerning sets his face toward wisdom, but the eyes of a fool are on the ends of the earth."