I had the opportunity last week to serve as a volunteer at the Second Annual Chris Kyle Memorial Benefit and Auction.  That's a long name for an event whose purpose was to raise funds to serve those who serve us.  Whenever I have been involved with events such as this -- those which are committed to a worthy cause -- there is always a fair amount of drama and egos.  This one was no different.
But all the hard work and long hours culminated in a dinner and auction that re-focused everyone back on the reason we were all there.  Yes, the weekend was in memory and honor of Chris Kyle (along with Chad Littlefield), but it was the veterans who were in attendance, and who spoke that night, who now resonate in my thoughts and my prayers.  They have given me a new perspective on the relationship between our military and the citizens of this country.
As the audience listened to the struggles that these men and their wives and families have endured, I began to see a pattern that I was aware of, but had never fully comprehended.  The veterans spoke of their physical scars and injuries, and it was apparent that the struggle to regain some kind of normalcy has been long and tough.  And we're all aware that PTSD (Post Traumatic Stress Disorder) and TBI (Traumatic Brain Disorder) have greatly affected the lives of our soldiers.
One veteran was there on behalf of 22Kill.com, a campaign sponsored by the  organization HHC (Honor Courage Commitment, Inc), which was founded by a Marine veteran who wanted to make a difference in the lives of returning vets. With the astounding statistic that an average of 22 veterans per day are committing suicide, HHC and 22Kill are committed to changing the negative stereotypes of veterans, and to 1) honor those who serve(d); 2) raise veteran suicide awareness; 3) recruit veteran advocates, aka "Battle Buddies"; 4) educate the public on current veteran topics; and 5) to empower veterans through HHC, Inc. and their programs. 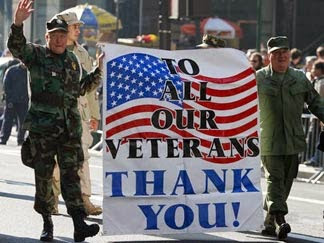 But with all the emotion and the enthusiasm by the audience to honor and help our returning veterans, I became aware of a gulf, or chasm, between them and us, the average American citizen.  The veterans' speeches just restated a paradigm that I already knew existed.  As they told their stories, it was obvious that they had problems relating to anyone other than their "brotherhood" of fellow veterans.  That is understandable ... no one but a person who has faced combat alongside them could ever fully relate to the aftermath of severe injuries and/or PTSD.
Yet that does not negate the sincere desire by the average American citizen to express the respect, honor and high regard that we maintain for the country's veterans.  But there always seems to be a disconnect between what we are trying to communicate and how they receive it.  To be honest, more than one has told me that they don't really "need" us to thank them for their service, or view them as heroes.  I perceive that what we think doesn't really matter to them.  We are on different sides of a huge abyss and the separation is too wide.  So, why is there such a divide and such distance between today's veterans and citizens?  Why does this phenomenon seem to have been less during other wars our country has endured?
As I try to make sense of what I instinctively know is true, a couple of facts boil to the surface.  First of all, our collective memory, as a nation, spans WWII, the Korean War, the Vietnam War, and the Afghanistan/Iraq wars.  As far as the American psyche is concerned, those wars lasted for the following durations:  WW II - 6 years (1939-1945); the Korean War - 3 years (1950-1953); the Vietnam war - 9 years for the direct war (1964-1973); and the Middle East wars in Afghanistan and Iraq - nearly 14 years (2001-present).
As you can see, our military has been at continuous war for nearly 14 years!  And who is to say how many more years they will be in Iraq and Afghanistan, or what other "hot spot" will require their presence?  Multiple deployments have left our troops constantly on the battlefield.  Unlike WWII, Korea, or even Vietnam (with all its negative connotations), our troops have been gone so long and divorced from their civilian lives and interaction with the homeland for such a long stretch of time, that our common experiences as Americans is disappearing.  It has become an almost "us" versus "them" kind of relationship.
The sad thing is that, while these veterans are having a difficult time transitioning back into their families and society, we citizens are struggling with how to break through the divide that separates us.  We truly respect their service, and like the veterans from past wars, we want to honor what they have sacrificed.  Yet it has also become apparent that, for many, their service was not done on behalf of "God and Country", as I idealistically hope for; but for the "brother" next to them -- for the ones with whom they identify the most.
Because of the duration of this ongoing global war, the original reason has become blurred (if not nonexistent); and our veterans identify with the brotherhood of soldiers more than the American population.  The longer we remain at war, the wider the division and the disconnect will become.  In the end, our cohesiveness as a nation will suffer, and the struggle to re-establish an alliance of solidarity will be more difficult to achieve.  We must reconnect the bonds that have been broken!  We can help each other heal the scars of war and reclaim our shared identity as proud Americans.