"It's About Being An American!" 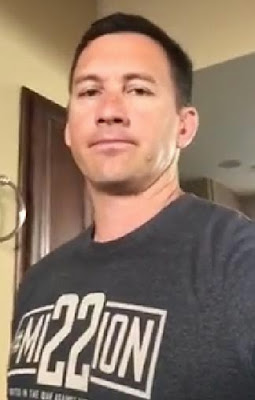 Believe me, I am not one to repost videos or remarks from Facebook.  But today is the exception.  If you have been reading my blog since its inception, then you know that I have been fortunate enough to train under Travis Haley, a veteran Force Reconnaissance Marine.  I have written about the ways in which he has made me a better person, as well as a better shooter.  I respect his military service, his creativity, his innovativeness, and his code of honor, morals and behavior.
So, it was with a good bit of interest that I noticed he posted a "selfie" video, so to speak, on his Facebook page, titled "Don't Ask Me Again! Make A Difference."  As soon as I clicked on the video I knew it was not coming from his professional side.  This one was personal!
He had received a Facebook message asking him his opinion on what our "course of action" should be regarding the incidents in Baltimore and around the country; on racism, to be exact.  The ridiculous charge by the messenger was that men like Travis could "grab their guns and go there, make a huge difference, and stop this."  To say that Travis was taken aback, is putting it mildly.  Anyone who knows him could gauge his reaction by the steely glare into the camera and the set of his jaw.  His response?  "You're ignorant, and a racist a--hole for asking those kinds of questions and making those kinds of statements."
His anger stemmed from the fact that the person who contacted him insinuated that as a celebrated American soldier, who had fought Evil and terrorists who were trying to take away our freedoms, he would be the perfect candidate to put a stop to what was happening in Baltimore.  But Travis's response was unequivocal ... "These are Americans; we are ALL Americans at the end of the day.  If you are a legal citizen of America, whether you are black, white; whether you are Hispanic, Asian ... it doesn't matter what your race or culture or ethnic background is.  If you are here legally, you are an American citizen."
As you listen to him explain his theory about anyone who would dare to suggest that it is the role of the military to stop citizen protests, you know where he is coming from.  Those who try to use race or "the color card" to divide, do so to destroy us as fellow Americans.  He pointed out that this tactic clouds the more important point that "American" should be the description by which we all identify ourselves.  As he says, "American ... that's a pretty important word!"  That is what he and his fellow Marines (of all colors and ethnic backgrounds) have fought for.  He charges that Race and Racism is wrongfully becoming the priority -- the focal point -- rather than who we are ... Americans!
He's tired of people asking him what his stance is on Baltimore, or Ferguson, or the like.  Instead, he challenges us all to stop focusing on the distraction of racism, and to "be significant; get some substance in your life and make a difference."  Basically, he is drawing attention to the fact that every social media site and news outlet is making racism the predominant story!  We should not buy into that narrative!
As Travis concludes, he points out that we are not born racist; we learn racism.  Instead of waking up each day and embracing this negative persona; drinking the "racist koolaid", so to speak, we should get some substance in our lives, stop making racism the primary issue of your existence, and stop making excuses.
Believe me, his statement was a bit more colorful than I have expressed here today, but I think you get the drift.  Racism is being used to divide and conquer this country, and we need to do our part to stop the tide and eliminate it from our consciousness and vocabulary.  Our lives should stand for something more important than something so worthless and divisive as racism.
As a Christian, I couldn't agree more!  And as much as I respect and honor Travis Haley and his bold statement on this issue, there is another man whom I try to model my life after, and His words are even more courageous and indomitable.  He saw us all as only one race ... the human race.  And He made us all in the same image; in the likeness of Him and God, the Father.
In the end, this human race has been plagued with racism, prejudice and antagonism for thousands of years.  But we don't have to accept that!  We can repent of our discrimination and forgive those who discriminate against us.  Above all else, we can love and respect each other, just as He loves each one of us.  At the end of the day, as Travis said, it really is all about who we are as people; and as my Savior commanded us, we should be kind and compassionate to each other; forgiving each other.  We were made to be better than this, and we can be better than we are!

Ephesians 2:14    "For He Himself is our peace, who has made us both one and has broken down in His flesh the dividing wall of hostility."