The Best Defense Of the 2nd Amendment I've Ever Heard!

I suppose the Sandy Hook tragedy will forever be used by the gun control crowd to further their talking points.  It's a conveniently emotional topic in which to rally support for more gun regulation and eventual transformation of the Second Amendment.  So, I wasn't surprised to hear it brought up again in an attempt to portray conservative Presidential candidates as the heartless gun nuts that the Opposition would like us all to believe they are.  But here is how you handle that trap ...
Question:  In the wake of the Sandy Hook shooting, a statistic surfaced putting support for background checks at 90%.  Did you go against the want of the nation, with your vote against Manchin-Toomey [which would have required background checks on all commercial sales of guns]?  And also, how does public opinion shape your response to national problems?
Candidate's Response:  You know there's an old line ... there are lies, damn lies, and statistics.  You're right, that was a poll that was bandied around a lot, but you can find a lot of results in a poll, depending on how you frame the question.
As you and I both know, we have a system of background checks in place right now.  When either of us goes to a federally licensed firearms dealer, there's a background check that is put in place.  What Manchin-Toomey was trying to do was extend that to every private sale between two individuals... to put the federal government [in the middle], (not in terms of having a system of background checks for federally licensed dealers) ... but for you and me, for two guys in a duck blind selling their shotguns, one to the other.  And the federal government doesn't have any business there.
And if you ask the American people that, they don't want the federal government getting in between private consensual sales between individual citizens.
And I would note ... when you asked about the role of public opinion polls ... when it comes to Constitutional rights, what matters is what the Bill of Rights says.  It doesn't matter what might be popular at the moment.  We've seen regimes across the face of the earth come and take away peoples guns; strip away their right to defend themselves.  And sometimes it's been very popular, and yet it is an inevitable prelude to tyranny. 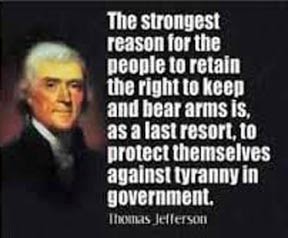 Our country was founded on a radical proposition, which is that our rights don't come from government.  They come from God.  And the purpose of the Constitution .... Thomas Jefferson said the Constitution serves as chains to bind the mischief of government.  And the entire reason for the Second Amendment is not for hunting; it's not for target shooting -- those are both wonderful; it's great to go with your family and your kids to go hunting or skeet shooting -- but that is not what the Second Amendment is for.  The Second Amendment is there so you and I can protect our homes, our families, our children, and our lives.  It's also there as a fundamental check on government tyranny.  And that ultimately is not subject to public opinion polls.  It's subject to the expressed protection of the Bill of Rights of the Constitution.
My response:  Those who would seek to bow to public opinion as the ultimate decision-maker would lead us down that slippery path to tyranny.  Are they that naive?  Can they not look at history and see how easily the masses have been manipulated and have played right into their tyrant's hand?  All one has to do is read a concise history of how the Nazi Party used gun control to "cleanse" and "control"; first, their own nation, and then the nations they proceeded to invade and conquer.
Did you know that in 1941, just days before the Pearl Harbor attack, Congress reaffirmed Second Amendment rights and prohibited gun registration?  Look how easily public opinion has been swayed in just 74 years!  So do you really want some public opinion polls to determine your freedoms and the right to protect yourself, home, and country?  Due to the proclivity of sheep to be easily led to the slaughter, how could you trust those opinions?  Based on the near ignorance of important issues by the populace in this country, public opinion polls is a ridiculous way to govern!  The Constitution is the best -- and only -- method by which we can maintain our freedoms.  The freedoms that were given to us by God should not be subject to the whims and impulses of the guileless masses.

By the way, that educated response to the Second Amendment ambush was Senator Ted Cruz.  You can hear his response first-hand by clicking on this link.

1 Peter 2:16   "Live as people who are free, not using your freedom as a cover-up for evil, but living as servants of God."