Is It A Good Idea that Tech Moguls Are Funding Longevity Research? 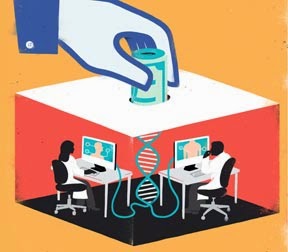 What do you think of when you read this headline: "Tech Titans' Latest Project: Defy Death"?  Do you have any concerns when you read the following paragraph?  "[The tech titans] who founded Google, Facebook, eBay, Napster and Netscape are using their billions to rewrite the nation’s science agenda and transform biomedical research. Their objective is to use the tools of technology — the chips, software programs, algorithms and big data they used in creating an information revolution — to understand and upgrade what they consider to be the most complicated piece of machinery in existence: the human body."
These are at the center of an article written by Ariana Eunjung Cha for The Washington Post.  All I could think of was the consequences of Adam and Eve eating the tempting fruit of the Tree of Knowledge of Good and Evil in the Garden of Eden ... God knew the next temptation would be to "take also of the tree of life and eat, and live forever", so man was banished from the Garden.  (Genesis 3:22-24).  In fact, God knew that man's ego would impel him to seek eternal life on his own; and in order to keep that from happening, God went so far as to set up mighty angels and a flaming sword that turned every way to guard the way to the tree of life!  Obviously, God does not want us to enter this realm!
Yet, because of our pride, here we have the Wealthy and the Elite doing just that!  They are as deluded as Adam and Eve -- thinking that they can somehow equal the efforts of God -- become "like" God, which is the same temptation Satan has used since the Garden.  You would think man would get the picture!
But savvy entrepreneurs like Peter Thiel (Ebay) and Larry Page (co-founder of Google), along with brilliant computer scientists and molecular biologists, are attempting to "rebuild, regenerate and reprogram patients’ organs, limbs, cells and DNA", which they surmise will "enable people to live longer and better."  These millionaire businessmen are essentially funding attempts to usurp God's tree of life.  They want to figure out ways to reprogram the DNA you were born with, and how to digitize your brain so it can live long after your body has died ... thereby creating a virtual you that can then be downloaded into any organism or created entity.
This scenario was even promulgated on a recent episode of the TV Show, The Blacklist.  The plot of the episode titled, "The Longevity Initiative", can be summarized as follows: "a private company called the Longevity Initiative, dedicated to unlocking the key to human immortality, is funded by tech billionaire Roger Hobbs. Recently discovered bodies in the back of a produce truck were not mutilated, but experimented on; clearly the Longevity Initiative has entered the human-trial phase."  This is supposedly a made-up story for TV, but can you believe it?!?!  The entertainment industry is even aware of what is going on in the name of advancing the human condition!
So, while the real-life men of our Technology Revolution have accomplished tremendous things in their lives, and are probably considered among the most intelligent and talented of our generation, I find myself amused and saddened at their lack of understanding about this existence we call "life".  Consider this statement by Larry Ellison, CEO of the software company, Oracle:  "Death has never made any sense to me ... How can a person be there and then just vanish, just not be there?  Death makes me angry ... Premature death even angrier."  As evidenced by this statement, these "geniuses" look at the world as if they control it; as if there is nothing bigger than themselves. 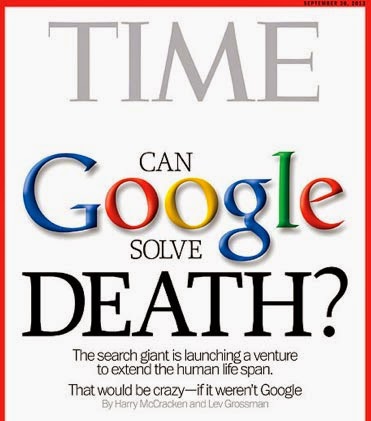 You may consider statements like these as just the musings of selfish men who have more money than they know what to do with.  But as pointed out in the Washington Post article, two-thirds of scientific and medical research is now funded by private industry; a growing share by billionaires accountable to no one and impatient with the pace of innovation.  What this means is that a large portion of the research into defying death and creating immortal life is unregulated and can potentially open a Pandora's box of research in stem cells, neuroscience, genetically modified organisms and viruses -- all of which, if handled in the wrong way or with a malevolent objective, could create a not-so-Brave, but Scary New World.
I believe that we should be concerned about these wealthy entrepreneurs and "philanthropists" who combine their own sense of self-preservation with the means to direct and command controversial research into prolonging man's lifespan.  We should especially be troubled when they come from the computer and internet fields, and when they look at the health-care system through their technological eyes and see the “data of billions of people,” collected through blood tests, online profiles, food purchases and fitness trackers.   They are quoted as saying, "When that data can be accessed and mined and utilized for good in an instantaneous manner ... that would be shattering in a positive way for the system as we know it."  But for whose good will this data be used; and by whose standard is it positive?  Are we in essence the guinea pigs for their self-funded and self-serving research?  I think we know the answer to that question.
And suppose they are right -- that the research they are funding results in cures for diseases that have plagued man.  Will only the wealthy, who have funded the research, receive the cures?  And if they are truly selfless humanitarians, how do they suggest that the planet sustain all these people who will certainly strain our natural resources?  Does anyone else think that they are playing God?
For me, the bottom line of this curiosity to defy death lies in the following paradox:  these wealthy tech magnates are trying to claim the power of something they don't even believe in -- trying to become like God; someone whom they can't even agree exists!  Their money is their god and they think they can do a better job than the real God of the Universe.  Sadly, they are just the latest in a long line of humans that have been deceived by the father of lies.  Just as Adam and Eve were driven out of the Garden for their folly, so, too will modern man be defeated in this latest effort to "out-God"  God, Himself.

Proverbs 14:16    "A wise man suspects danger and cautiously avoids evil, but the fool bears himself insolently and is [presumptuously] confident."