A few days ago, a friend of mine, Scott, commented that he had enjoyed reading my book, but he disagreed with me on one point.  I said, "That's alright ... I'm open to constructive criticism.  What did I say that you disagree with?"
He told me that he couldn't help but notice that I consistently wrote about defending my "freedoms", and he just needed to inform me that, in the true sense, "Freedom" had no "s" on the end of it.  He went on to explain that this nation once had a wise President who said, "Freedom is indivisible - there is no 's' on the end of it. You can erode freedom, diminish it, but you cannot divide it and choose to keep 'some freedoms' while giving up others."  I'm sure it comes as no surprise to many of you, that this sage advice came from our 40th President, Ronald Reagan.
It didn't take me long to come to the conclusion that both Scott and President Reagan were correct.  If we see Freedom as a collection of "rights" or "privileges", then a duplicitous or oppressive government could convince the populace that by merely altering, or even abolishing, a single aspect of our liberty, we are still left with the concept of having Freedom.   It shouldn't take one long to realize that over a period of time, or generations, much damage could be done by chipping away at our freedom.  What was once our stronghold of personal independence and liberties could easily be whittled down to a house of straw; easily demolished by any despot or tyrant. 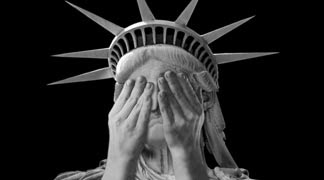 Freedom cannot be divided into sub-compartments because that gives one the illusion that there are separate facets to freedom; some perhaps less significant or consequential than others, and thereby less necessary.  Yes, the first Amendment of our Bill of Rights enumerates a number of "Freedoms", including that of speech, of the press, the right of the people to peaceably assemble, and to petition the Government for a redress of grievances.  But although the object of the Freedom may change, the "state of Freedom" remains the same.  It is a state of not being imprisoned or enslaved; and it imparts the power of self-determination.
Freedom is the state in which a person has control over his or her life; the ability to self-determine his destiny.  "Civil liberties" are often touted as the hallmark of American citizenship.  But how much freedom and control do we really have over our individual lives when 22 U.S. agencies are combined [under the banner of "Homeland Security"] in order to achieve "total information awareness" about every American citizen?  When every public record that pertains to you is accessible by someone you don't know, then that is a threat to your freedom.  The sad thing is, we have surrendered our autonomy and freedom from external control without even a sincere challenge.  It is disappearing before our very eyes, and with our unwitting compliance.
Finally, and regrettably, the once lofty ideal of freedom that this country represented, and its leaders embodied, has been replaced by a belief system that champions money and power.  America once recognized that their state of freedom was bestowed by God; but His Dominion and Sovereignty have been replaced by the Supremacy and Restraint of the State.  So, the question becomes, "Does Freedom still reside in America?"  I fear that it is taking its last breath, and unless God chooses to intervene, "the Land of the Free" will no longer exist.