Indiana has joined a handful of states to pass legislation protecting business owners from "burdensome" anti-discrimination laws that would force them to go against their faith.  Called "The Religious Freedom Bill", this law's primary intent is "to keep the government from forcing people of faith to provide services for same-sex weddings or other activities that are contrary to their religious beliefs."
As I'm sure you are well aware, there is an agenda in this country to confront business owners whose faith prohibits them from supporting same-sex marriages.  Wedding photographers, Bakeries, and Florists are often singled out as examples of discrimination against the LGBT community.  Too often, these business owners are forced to choose between their faith and their ability to make a living.  They have been sued, have lost in court, and rather than forsake their faith, have been compelled to file bankruptcy or otherwise close down their businesses. 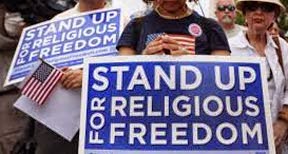 Unfortunately, our changing court system has not upheld the Constitution and our First Amendment which "prohibits the impeding of the free exercise of religion."  Hastily passed anti-discrimination laws by progressive lawmakers have, so far, taken precedence over our First Amendment rights.
But now, states like Indiana are moving forward in an attempt to give courts guidance on how to decide cases involving competing constitutional rights pertaining to religious freedom and discrimination.
Not surprisingly, supporters of the bill argue the measure is needed to protect Indiana business owners from too much government control. Opponents decry the measure as legalized discrimination.  It is obvious to me that there needs to be a stronger judicial standard in settling these cases.  The fact that specific business owners could be forced to lose their businesses, even though LGBT customers have viable alternatives from other businesses who would service them, seems like reverse discrimination and an excuse for a "witch hunt".
The Governor of Indiana, Mike Pence, released this statement after his state's House of Representatives passed the bill:  “The legislation, SB 101, is about respecting and reassuring Hoosiers that their religious freedoms are intact.  I strongly support the legislation and applaud the members of the General Assembly for their work on this important issue.  I look forward to signing the bill when it reaches my desk.”
The proposal is modeled on a 22-year-old federal law known as the Religious Freedom and Restoration Act. That law played a key role in the U.S. Supreme Court's decision that allowed Hobby Lobby and other closely held corporations with religious objections to opt out of an Affordable Care Act requirement that they cover certain contraceptives for women.
The faith of Hobby Lobby's owners played prominently in their decision to oppose that law, just as the faith of business owners in Indiana is important in how they conduct their lives and businesses.  And, as you would expect, both sides of the argument used the Bible to support their arguments.
Proponents of the Religious Freedom bill pointed to an anesthesiologist who didn't want to anesthetize a woman in preparation for an abortion.  They believe the Bible's command to "do all things as unto the Lord" means religious believers need to be protected not just in church, but in their workplaces as well.
Opponents to SB 101 argue that Jesus served all people, pointing out that he "had dinner with hookers", and blessed them.  Anything less than total acceptance of the LGBT lifestyle is discrimination.
What I have found disconcerting about this whole issue is the fact that tolerance seems to be awfully one-sided.  From what I have read, every business owner who cited their faith as reason they could not offer their services to same-sex weddings offered to help the customer find another business owner who would provide the service.  But, you see, I'm not sure that the actual service was really the priority to those filing suit.  I think they wanted to force those of faith to pay some kind of penalty for their religious beliefs; even going so far as costing them their living.  And that, as Indiana and 12 other states have determined, will soon be illegal.  It's just too bad that we have to pass a law to be able to practice our faith in good conscience.

2 Corinthians 10:5    "We destroy arguments and every lofty opinion raised against the knowledge of God, and take every thought captive to obey Christ..."