The Modern Era of Christian Martyrs

If you are interested in the history of the Christian faith, then you are no doubt familiar with Foxe's Book of Martyrs.  Published early in the reign of Queen Elizabeth I, (1563) and only five years after the death of the Roman Catholic Queen Mary I, Foxe's Acts and Monuments of these Latter and Perillous Days, Touching Matters of the Church (this was the original title) was an affirmation of the English Reformation in a period of religious conflict between Catholics and the Church of England. 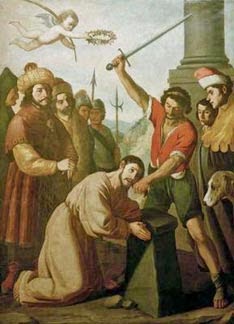 Although never considered an impartial account of the Protestant Reformation, the book was nevertheless a testimony of Christian martyrdom, and has survived over four centuries to represent the  unmitigated faith of Christians in the face of persecution and death.  The stories of the martyrs begin with the Apostles Peter and Paul; the former who was crucified upside down because he felt he was unworthy to be crucified as His Lord; and the latter who was beheaded on the orders of the Emperor Nero.  We read of the deaths of all the early apostles and disciples (except for John, who nevertheless survived being thrown into a cauldron of burning oil); all were either crucified, stoned, or beheaded.
The book details the deaths of other Christian martyrs over the next millennia and a half, and it underwent several editions; the latest being the British Academy's funding for a new critical edition in 1984, completed by 2007.  And although the historiography of Foxe's Book of Martyrs is quite valuable, have you ever wondered if such venerated Christian martyrdom is a thing only encountered in the ancient past?  If so, consider this fact:  The ancient nation of Iraq was home to 1.5 million Christians just 10 years ago.  Their number is now under 150,000.
With that astonishing reality in view, I invite you to read a book by author Tom Doyle, titled Killing Christians: Living the Faith Where Its Not Safe To Believe.  Jim Denison, of ChristianHeadlines.com wrote a meaningful tribute to his friends, Tom and JoAnn Doyle, who are longtime missionaries to the Middle East.  According to the article, Tom's book, Dreams and Visions: Is Jesus Awakening the Muslim World?, tells the incredible story of Muslims worldwide who are meeting Jesus in miraculous ways, including visions and dreams.  As a result of such miracles, more Muslims have come to Christ in the last 15 years than in the previous 15 centuries.
But now, Tom has written a new book, titled Killing Christians, in which he tells the other side of the story ... the incredible stories of Christians who are willing to die for their faith in the face of unprecedented persecution in the modern world.  Here are just a few examples of their stories:  A believer smuggles Bibles into Somalia by hiding beneath decaying corpses in coffins.  A Christian in Syria, speaking to an underground church, says of their shared faith, "This will cost us our lives.  We will die for this."  He and his friends have already purchased a plot of ground in which to be buried when they are martyred.
In Baghdad, a Muslim comes to Christ through the kindness of an American soldier who shared his faith and gave him a Bible.  A Christian in Saudi Arabia struggles to understand why her friend Mina was martyred while she was miraculously spared.  She concludes: "Too often, even Christians forget that our faith is not primarily for this life.  It is for the life to come.  We who are still here are the ones who have been left behind.  Our real life has not even begun, but for martyrs like Mina, it has."
We Western Christians often fail to recognize that Christianity originated in the Middle East amid such persecution.  As a recent CNN article pointed out, "Christianity was born in Bethlehem, in what's now the West Bank. It took root among people like the Assyrians, who flourished in ancient Mesopotamia. It soon found a home in places like modern-day Turkey, Iraq, modern-day Iran, and Syria."  That persecution is as real today as it was when our faith was first founded; and threatens to extinguish it just the same.

While martyrdom for Western Christians is not even on our radar, we must accept its reality in the rest of the world, and the very real possibility that we will soon face our own crisis of faith.  Although the growth of the Church has leveled off in the West, it is exploding elsewhere in the world; and all amidst the extraordinary stories of Christian martyrdom at the hands of hate-filled extremists like ISIS and Boko Haram.  Rapes, beheadings, and kidnappings are all being carried out against Believers in the Middle East, and a new generation of martyrs is being documented.
As author Boyle concludes, "Jesus' message of love and reconciliation thrives in a climate where hostility, danger, and martyrdom are present.  Persecution and the spread of the gospel are as inseparable as identical twins...".  So we don't need to read the historical accounts of martyrs such as those found in The Book of Martyrs.  If we need inspiration to strengthen our faith, we have to go no further than the stories of modern martyrs in the Middle East.  Their blood mingles with the blood of the ancient martyrs, as they cry out, "O Sovereign Lord, holy and true, how long before you judge the people who belong to this world and avenge our blood for what they have done to us?" Let us add our prayers to their cry, and call on the Lord to return for the sake of us all!