The Mark of the Cross: A Sign of Victory

Talk of the "Mark of the Beast" is a growing subject these days.  You don't have to be a Bible-believing Christian to be aware of its significance; every secularist who watches the parade of world events on the nightly news, and every video-gamer who enters the virtual world, is exposed to the ramifications of Evil's influence upon mankind.  And for centuries there has been controversy over exactly what this "mark" will look like and how it will be administered.
But did you know that there is also historical evidence of a "Mark of the Cross"?  Christians have long been cognizant of the "seal of God" that is forecast as appearing on the foreheads of Believers in the Book of Revelation.  It has been understood throughout the centuries of Christianity that this is a spiritual seal; a sign that one belongs to God and one that only the spiritual realm can see.  I am in perfect agreement with that.
But a recent news story by Walid Shoebat, the outspoken former member of the Palestinian Liberation Organization, and radicalized Muslim turned Christian, reveals that the sacred sign of the Cross has long been utilized in both spiritual and real-world war scenarios.  In fact, through the spiritual power of the Cross, the physical manifestation of the symbol has long conquered evil, "transitioning into a temporal war in which the darkness is combated through arms" and human warfare.
That is why I found it extremely interesting to hear his report about "Iraq’s first Christian-only brigade of regular forces [recently graduated] to help retake the community’s towns and villages from the Islamic State group while they put the mark of God — the Holy Cross — on their foreheads, before marching to battle against ISIS. Christians are reviving a biblical custom from Ezekiel’s time in which God demanded to mark the foreheads of the followers of the true God (explained later)."
It seems that in the wake of the decimation of Christian communities in ancient Iraq, Christian fighters have stepped forward to declare their faith and their intention of invoking God's power and protection in reclaiming their country from the evil that is ISIS.  In so doing, they are adopting the historical practice of applying the "Mark of the Cross" to their foreheads.
So, I ask you to consider the questions that Mr. Shoebat poses:  Is the implementation of this Mark meant to be a spiritual mark or is it intended to be literal as a physical mark that is visible by the naked eye? In other words, is the Christian marked only with a spiritual mark, or is he also required to have a physical mark, or even both? Or is it possible that this whole issue is simpler than we all think; is it unusual, after all, for two opposite sides -- the followers of Christ on the one side and the followers of Antichrist on the other -- to express their allegiance to their god by displaying physical marks that are visible to everyone; either for Christ, or for Antichrist, to show the world which side they are on? 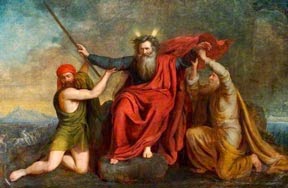 I'd like you to consider the following examples from Biblical history ... First, we have the physical marking of the blood on the doorposts of the Israelites as they prepared to make their Exodus from Egypt.  The shape of that blood [which would repel the Angel of Death] was in the shape of a Cross.  Again, as Walid Shoebat points out, "When the Israelites fought in a battle in the 17th chapter of Exodus, Moses prayed for God’s help. However, Moses prayers were only heard when he prayed with his hands extended making a cross or a “T” shape similar to the form of Christ when He was crucified.  Moses who was an Old Testament prefigurement, or type of Christ, demonstrated (probably unknowingly) the symbol by which the Israelites (and us) would be saved."
Then, there is the account in the 8th chapter of Ezekiel when the Lord transports his spirit to Jerusalem to see the wickedness and pagan rights taking place in His Temple.  Scripture records what Ezekiel saw in his vision:  "Then He brought me to the entrance of the north gate of the Lord’s house; and behold, there sat women weeping for Tammuz [a Babylonian god, who was supposed to die annually and subsequently be resurrected] .... And He brought me to the inner court of the Lord’s house; and behold, at the door of the temple of the Lord, between the porch and the bronze altar, were about twenty-five men with their backs to the temple of the Lord and their faces toward the east, and they were bowing themselves toward the east and worshipping the sun ...".
In the 9th Chapter of Ezekiel we see what the Lord instructs the prophet to do about these abominations:  "And [the Lord] called to the man clothed with linen, who had the writer’s ink bottle at his side.  And the Lord said to him, Go through the midst of the city, through the midst of Jerusalem, and set a mark upon the foreheads of the men who sigh and groan over all the abominations that are committed in the midst of it.  And to the others He said in my hearing, Follow [the man with the ink bottle] through the city and smite; let not your eye spare, neither have any pity."
This was obviously a physical mark that was inked upon the foreheads of faithful men to distinguish them from those that were evil.  This same mark was boldly displayed during the Crusades, when Christian soldiers fought the Muslims.  "They had the cross engraved onto their chests and their shields so as to signify the mystical lifting of their crosses within the heart and the spirit."  [It is not my purpose to uphold all that was done during the Crusades in the name of Christ, but to simply point out that the mark of the Cross was physically present during this religious warfare). 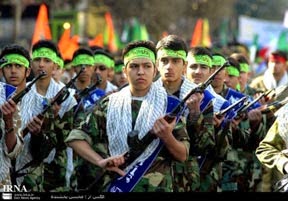 And so it is today.  I think we would all agree that the attempt to establish an Islamic Caliphate in the Middle East is, at its center, a religious war.  But it is also a spiritual war; the forces of evil are active in influencing the atrocities of ISIS, and they wear their allegiance on their foreheads in the form of headbands that read:  “There is no god but God, Muhammad is the messenger of God.”
But now there is a small brigade of 600 Assyrian Christian warriors who have declared their loyalty to the true God YHWH, and proudly display their Mark of the Cross as they strive for victory.  May all the powers and forces in the spiritual realm take notice that Jehovah Nissi (The Lord is My Banner), not only leads, but is in the midst of this battle, and His power is mighty to conquer.  God’s presence and power will take these brave fighters into the battle and assure their victory when the battle is done.  Just as we are called upon to pray for the peace of Jerusalem, we must pray for the Iraqi Christians who are on the front lines of this spiritual and physical war!

2 Chronicles 20:17   "You shall not need to fight in this battle; take your positions, stand still, and see the deliverance of the Lord [Who is] with you, O Judah and Jerusalem. Fear not nor be dismayed. Tomorrow go out against them, for the Lord is with you."