Starbucks To Brew Up A Political Storm 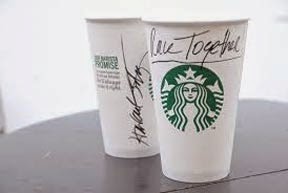 At first, I thought this might be a fluffy kind of post, but on deeper reflection the subject really gets my gall.  Picture this ... You're in a hurry to get to your job, or an appointment ... or you just want to relax after a hard day by enjoying your favorite flavor of Starbucks coffee.  You place your order, and when the barista hands you your cup, there is a handwritten message on it that says, "Race Together".
As you ponder the implications of this personally written note, your server attempts to engage you in a conversation on the oh-so-pleasant-and-agreeable topic of race relations.  Unless you have formed a close bond with your local Starbucks barista, how are you going to feel when a veritable stranger asks your opinion of the Ferguson, Missouri fiasco?  What's more, how are you going to respond, as those around you wait breathlessly for your answer?  And finally, what exactly is the progressive corporation Starbucks hoping to accomplish with this latest social survey?
Are you finding this as offensive, insulting, and invasive as I am?  I say "offensive", because I don't need some character from Starbucks issuing me a challenge on race relations in a room full of strangers.  I'm thinking it's "insulting" because they obviously think I need to be reminded that we have a race relations problem in this country.  "Invasive" comes to mind as I contemplate that this is a serious subject in which I have personal and intimate opinions that I don't want to share with just anyone; there needs to be an atmosphere of mutual trust.  That's not going to be the case with someone I just met for the first time that day and who is handing me a Tall Skinny Mocha Latte.
But, yet, this scenario is exactly what Starbucks is launching as their latest gimmick in their "social justice" campaign.  As Breitbart.com reported earlier this week, Starbucks has published a full page ad in the New York Times — a stark, black, page with a tiny caption “Shall We Overcome?” in the middle, and the words “RaceTogether” with the company logo, on the bottom right. The ad, along with a similar one in USA Today, is part of an initiative launched this week by the coffee store chain to stimulate conversation and debate about the race in America by getting employees to engage with customers about the perennially hot button subject.
Granted, the servers are not required to engage with customers, but I'm pretty sure that most of their employees are more than eager to ruffle a few feathers in favor of the corporate strategy.  Starbucks CEO Howard Schultz maintains that he is not trying to cause friction between his company and the general public, saying "It it is so vitally important to the country, and that the United States is so much better than what the current state of race relations portray it to be".  But remember, this is the guy whose opinions on same-sex marriage, abortion, gun control, and the Bible fall on the far left side of the spectrum.  So do you think he really has any interest in hearing conservative opinions on any of these topics, let alone race relations?
What happens if someone consents to a conversation with the barista and agrees that race relations were a flash point at Ferguson, but goes on to point out that race turned out not to be the real issue in the death of Michael Brown; it was the actions of Michael Brown, himself.  Or how will the barista respond to the customer's question, "Do you think race relations have been politicized in this country"?  Is that the kind of conversation that Starbucks is looking for?  Or is it all one-sided, and this is just another publicity stunt to taunt the public with the corporation's progressive agenda?
I don't know about you, but I am paying for a warm and cozy experience ... I don't need -- or want -- to be bombarded with social commentary.  According to their own mission statement, here is what Starbucks is all about:
•  Creating a culture of warmth and belonging, where everyone is welcome.
•  Acting with courage, challenging the status quo and finding new ways to grow our company and each other.
•  Being present, connecting with transparency, dignity and respect.
•  Delivering our very best in all we do, holding ourselves accountable for results.
•  We are performance driven, through the lens of humanity.
I guess what really bothers me, is that I know good and well that this company is not interested in the "free flow" of ideas, or in having mutually respectful dialogue.  This is just a not-so-subtle way of driving the public discussion in their pre-determined direction.
So, let me just give them a piece of unsolicited advice... all I want from them is the warm, welcoming atmosphere and a good cup of coffee; a place to escape the politicization of our society.  I don't need them to "be present" or "to connect".  I can go to a political rally for that.  As far as their performance, all I want them to do is deliver the best cup of coffee they can; that's what I'm paying for.  And I'm willing to bet that this latest social campaign gets dropped before the next buttery caramel sauce can sink to the bottom of a macchiato.

Titus 3:9    "But avoid foolish controversies, genealogies, dissensions, and quarrels about the law, for they are unprofitable and worthless."