What Happened To America's Pride?

The word "PRIDE" is defined as "a feeling or deep pleasure or satisfaction derived from one's own achievements, the achievements of those with whom one is closely associated, or from qualities or possessions that are widely admired; the consciousness of one's own dignity."  In this sense, "pride" is a good thing; it insinuates a common theme of respect, esteem, and worthiness. 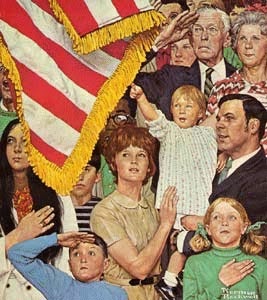 Do you remember when our country and countrymen used to be proud of who we were; that our traditions and institutions were worthy of honor and respect?  When what we stood for, and our appearance, mattered?
Maybe I'm just too old, but I remember store owners sweeping out front of their entrances; streets and roadways clean of litter; and community parks and byways mowed and manicured.  I remember when it was a matter of pride to be selected to raise and lower the flag in the school courtyard; when people dressed up to worship in God's House; and when immorality was not tolerated in our public officials.
I don't know about where you live, but gang graffiti is written across every bridge overpass and on the sides of every train car.  Unsightly litter is strewn everywhere; the streets of my little rural town have potholes you could swim in; and the right-of-ways have weeds and grass growing to your knees.
Even big metropolitan cities are pictures of "urban decay"... both spiritual and physical.  Flags in front of Federal buildings are often faded, tattered and torn.  The trendy, popular mega-churches are filled with worshippers dressed in t-shirts and flip-flops; or they look as if they just threw on last night's party clothes.  And the immorality that is tolerated!  It seems that moral standards and principles of behavior no longer apply --- from the pastors of our Churches; to the administrators of our Schools; to the bureaucrats elected to represent us and oversee justice in the land.
I know that there are those who would say those are old-fashioned and intolerant opinions.  That we have "progressed" to a more open and permissive society; one that allows for "relativity" and "diversity" in our shared communities.  They would tell us that we have evolved from a White, Protestant culture to a multi-colored, multi-cultured society; therefore, there is no longer a set of absolute standards or the need (or desire) for a universal pattern to follow.
I agree that we have been enriched from the ever-changing dynamics of the American population.  I believe that God designed this nation to be the melting pot of all those He created; that the blessings of this nation have grown as we adopted the noble and worthy attributes of all those who found their way to our shores.  I believe all that ... as long as we continue to build on, and maintain, the original foundation of this national venture; to take pride in mutual ownership, so to speak. 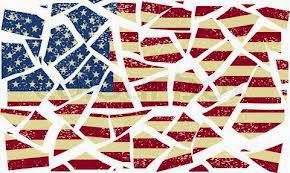 It seems that "America", itself,  has gotten lost in the national dialogue.  Those who celebrate the idea of a "Progressive America" are so consumed with allowing for our cultural differences, that the common denominator of who and where we have fallen on the timeline of history is no longer on our national conscience.  Pride has taken a back seat to affirmation... every cultural nuance must be given equal status and support, with no consideration to what binds us together.  Where are the "widely admired qualities" of what it means to live in America?  Or, in other words, do we even possess a common standard in which we can view each other as fellow Americans?  Are we invested in our joint occupation of this blessed land?
I'm afraid I don't see it anymore.  Faith has become a lightening rod.  We can't even agree on the definition of Marriage or Family.  The Constitution used to guarantee us certain freedoms and rights, but even that venerable document has become a wedge between us.
The way I see it, throughout our history Pride has been the glue in the fabric of this nation's consciousness.  Each new cultural group, through struggle and perseverance, melded into the formation that is America.  They brought the best of their values and principles to the composition of this nation, and the fabric was made stronger in a renewed covenant as Americans.  But with the deterioration of Pride in identifying oneself as American, the fabric has begun to fray and disintegrate.
I began this post talking about how the outward appearance of Pride in America is disappearing.  However, I think that is just a manifestation of the lack of internal pride in who we are as a nation and a people.  "Relative standards" cannot bind a people together; they can only serve to separate and divide.

1 Corinthians 1:10    "I appeal to you, brothers, by the name of our Lord Jesus Christ, that all of you agree, and that there be no divisions among you, but that you be united in the same mind and the same judgment."