Warning: Your Child's Education Is Under Attack!

I have been shouting from the rooftops for nearly two years now that there is a threat to our national education system in the form of academic standards known as Common Core.  I know that the difficult economic issues in our country have us all scrambling to make ends meet, but I implore parents to take the time and pay attention to the homework being foisted upon your children. 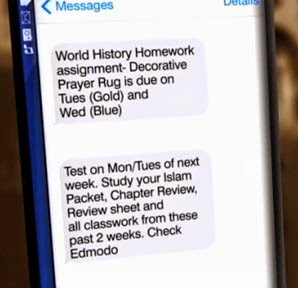 One father in Seminole County, Florida, was dismayed to find a text message on his 10th-grade son's phone from his History teacher, in which the teacher sent "a reminder to complete his prayer rug assignment and study an assigned packet on Islam."  Now, this assignment was part of a class on World History, so you might think that it is appropriate to present information on Islam, the world's second largest religion with a following of over one billion people—one-fifth of humanity.
But how do you feel when you discover that the pages in that same history book that provided instruction on Christianity and Judaism had been removed?  How do you feel about the fact that the study of the Five Pillars of Islam was mandatory in that class?  The father also claimed that students were told to “recite this prayer as the first Pillar of Islam, off of the board at the teacher’s instruction.”
I do not have a problem with students in high school studying the impact of different religions on the events in world history.  After all, religion has played a huge part in all the major wars throughout time.  But when it becomes part of a high school curriculum to involve the students in the practices of one religion and in reciting the tenets of one religion -- to the exclusion of other major religions -- then that becomes a matter of indoctrination, in my book.
However, if parents are unaware of what's being included in their children's assignments -- and what is being ignored or purposely excluded -- that indoctrination and propagandizing is tantamount to re-education of our children.  But that's not how the Executive Director of Seminole County High School Administration, Dr. Michael Blasewitz, sees it:  "... the Pillars of Islam are benchmarks (a standard, criteria) in the state curriculum", and "If anything, [the curriculum] is a little imbalanced toward Christianity and Judaism." 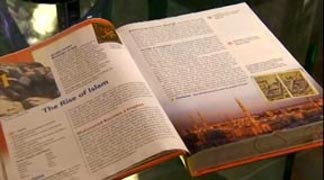 If that statement doesn't show you the direction in which our kids' education is going, consider this statement by the Florida branch of the Council on American-Islamic Affairs (CAIR):  "In a diverse society, young people should be taught about a wide variety of beliefs, cultures and faiths, and particularly about a faith practiced by millions of Americans and more than one fifth of the world's population.  Denying all students access to vital information based on the biased political or religious agenda of Islam phobic groups or a handful of misinformed parents does a disservice to our school system, our state and our nation. History is not kind to those who censor information or ban books."
So, where's the "wide variety", when entire sections on Christianity and Judaism are removed from school textbooks?  Why don't they talk about the Christian-phobic groups?  And I don't know if that last statement was a veiled threat or not, but suffice it to say that they have set their sights on changing our education system and influencing our kids -- and much of their activity is done through the auspices of Common Core, and without parents' knowledge or consent.  You must get involved in your children's education!
And lest you think that there is not a war on Christianity in our nation's schools, a high school in Nassau County, Florida (Florida seems to be ground zero for the attack on our schools) was warned about a student who, selected to read the morning announcements over the loudspeaker system, chose to end his recitation with "God bless America, keep us safe."
This time it is a Humanist/Atheist organization that is complaining "that allowing the statement favors 'God-belief' and 'validates a theistic worldview' that alienates atheists and non-believers."  Why aren't they complaining about the "theistic worldview" being presented in 10th-grade World History classes in Seminole County?  Does anybody else see a glaring bias against the Christian faith?
I can't help but believe that both the atheists and CAIR do not want students in World History classes -- or any classes -- to understand that the United States was founded by Christian believers, and became a haven for religious freedom for all faiths... that would not suit either of their agendas.  Dr. Blazewitz may promote Islam as a benchmark of his curriculum, but I will declare Christianity as the bedrock of this nation.  And, parents, if you want your children to have any chance of enjoying the America you grew up in, you better start getting yourself elected to school boards and supervising your child's education.
I will leave you with these thoughts from Benjamin Rush, known as SIGNER OF THE DECLARATION OF INDEPENDENCE; SURGEON GENERAL OF THE CONTINENTAL ARMY; RATIFIER OF THE U. S. CONSTITUTION; “FATHER OF AMERICAN MEDICINE”; TREASURER OF THE U. S. MINT; “FATHER OF PUBLIC SCHOOLS UNDER THE CONSTITUTION”: "The great enemy of the salvation of man, in my opinion, never invented a more effective means of limiting Christianity from the world than by persuading mankind that it was improper to read the Bible at schools."

Click here for interview with concerned father of Florida student.

2 Timothy 3:16-17   "All Scripture is breathed out by God and profitable for teaching, for reproof, for correction, and for training in righteousness, that the man of God may be competent, equipped for every good work."

Email ThisBlogThis!Share to TwitterShare to FacebookShare to Pinterest
Labels: Education, Faith, Our Youth