You Can't Take Our Heroes Away From Us! 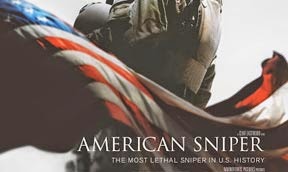 Well, that didn't take long!  Nearly as soon as the news broke that the movie American Sniper was breaking all kinds of box office records, the haters in Hollywood came unglued.  Michael Moore and Seth Rogen couldn't wait to denigrate the memory of Navy Seal, Chris Kyle.  I wonder if they've even seen the movie.  But, as evidenced by the 10,000+ comments to their disrespectful tirades, the public doesn't give a damn what they think.
It is quite apparent that the Haters, and others like them, do not understand why millions like myself, who saw the film, sat in reverent silence as the final minutes on screen showed the motorcade carrying his body for burial at the Texas State Cemetery in Austin.  I don't think they can even imagine why thousands of people lined the 200-mile route along Interstate 35, during a cold, rainy day, to pay tribute to a man who stood for the American values of God, Country, and Family.
And I guess there's our explanation why they hate the success that this movie is enjoying ... they hate everything that Chris Kyle held dear.  They hate God; they certainly hate the America that we love and that Chris Kyle fought to protect; and they hate the family values that teach love and respect for all three principles.
How it must gall them to see a movie like American Sniper be liked, admired, and supported by so many people!  But their hate has so blinded them, that they can't see past it.  They can't see that the movie stands for so much more than the politics of the Iraq War or the reputation of Chris Kyle as "the most lethal sniper in U.S. military history."  I think I can speak for most who stood in endless lines throughout this past weekend to see the movie .... this film captures not only the heart and soul of a patriotic American, but the tremendous toll that our wars in Iraq and Afghanistan have taken upon our military and their families.  And we need to recognize that!  Perhaps better than any other vehicle, American Sniper puts American civilians in the shoes of a combat service member.  We see -- and feel -- what our government has asked our military to do, supposedly on our behalf.  (I applaud the movie for keeping the storyline focused on the impact on Chris Kyle and his family, rather than bringing the Military-Industrial Complex into the picture).  And I hope that the film will start dissolving the psychological and emotional barriers that have occurred between members of the military and the civilian public.
I read a very well-written review by an Iraq War veteran, Paul Rieckhoff, who is CEO and founder of Iraq and Afghanistan Veterans of America (IAVA).  In his article, Mr. Rieckhoff stated, "The film exposes the incomparable distance we’ve created (and irresponsibly allowed to grow) in this country between what is now essentially a warrior class and everyone else. It’s tearing open a shameful national boil of a discussion that’s been bubbling below our collective skin for far too long. And with that, it performs an exceptionally important public service in a way only film can." 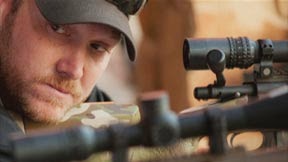 Of course, Mr. Rieckhoff views this distance from the warrior class, and seems to view the civilian class as disconnected and disinterested.  I will agree that this is true of some people.  And I understand that it is only natural for those who have experienced the horrors of this war to sequester themselves among fellow warriors.  We cannot possibly understand what they have witnessed and endured.  And any attempt on our part to connect with them has been difficult; from our inability to share their experience, to their reluctance to include us.  That conversation couldn't even take place between Chris and Taya Kyle!  It would be impossible between the Military and the American Public.  Yet, I wish there could be a way for our warriors to understand that so much of the public wanted that conversation; wanted to be able to express our support and our pride, but it was never encouraged, often awkward, and there seemed no way to bridge the divide.
American Sniper has shown the public the way that war looks, sounds, tastes, smells, and feels ... and it is truly haunting.  It is haunting because of the raw pain Chris Kyle experienced on his way to becoming a legend and a national hero; haunting because this embattled man's job was to take lives in order to save lives; haunting because he felt he hadn't done enough to ensure that more warrior's came home; and haunting because he was on the path to discovering a new purpose, and recovering his joy for life. 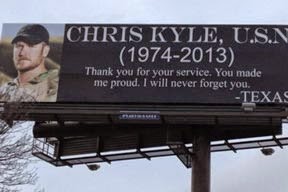 Hollywood can try to distort his legacy all they want, but we Texans are very proud of our heroes; of men like Chris Kyle and Marcus Luttrell who stand up for old-fashioned and politically incorrect values.  I have had the opportunity to meet Mr. Luttrell and Chris Kyle's parents.  How can one ever express to them what it means to you as an American citizen to know that men like them are willing to take a stand against Evil?  How do you say "thank you" and let them know you will never forget their sacrifice, nor take their service for granted?  Perhaps American Sniper can be the beginning of this much-needed conversation.  The Iraq War has divided much of America.   Maybe this film will be the beginning of reconciliation between those who fought and those who always believed in them.