How Long Will This Unbelieving and Perverted Generation Continue?

I'm sure by week's end that all the Gossip Rags at your local grocery store counter will be boasting covers of the latest scandal involving Prince Andrew of the British Blue Bloods.  Allegedly, Andrew has been tied to Wall Street financier and convicted pedophile Jeffrey Epstein.  There are any number of websites that are willing to give readers an inside look at the twisted and perverted appetites of such wicked men.  And apparently they are part of a large and growing list of well known politicians, successful businessmen, and heads of state.  But why should we be surprised in these days in which evil grows and morality diminishes?  And sadly, this story is just a symptom of the growing depravity  in the world.
From the beginning of time, man's inherent and sinful nature has led him to pervert the ways of God.  In general terms, perversion means to "turn something away from, or to use something in ways other than its intended purpose".  Since everything God creates is good, and is meant for good, Satan loves to tempt us to use God's perfect creations for evil.
Our speech can become perverted when our tongues speak lies or vile words, instead of the language of love that comes from a clean heart.  The Bible says God hates the sins that come from pride, arrogance, evil ways, and perverted and twisted speech.  Justice can be perverted when it is used to oppress people through the unjust exercise of authority.  We see that through the countless warnings to avoid bribery, false witness, abusing the poor, and following the crowd in doing evil things.  And certainly, sexual perversion involving children goes against the intended purpose of God; it is distorting what God intended for good and using it to fulfill man's lustful and unnatural desires. 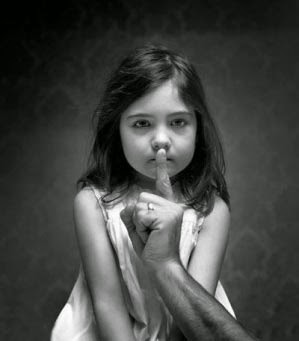 As further evidence of this generation's moral decay, the public only seems to be appalled at the use of children as sex objects and slaves when it is revealed that the Elite are involved.  Could it be that it is the celebrity status that interests us, rather than the obscene exploitation of children?  And how is it possible to turn a blind eye to the child prostitution and child pornography industries, which are driven by sexual perversion?
Did you know that there are an estimated 20 to 30 million slaves in the world today, with approximately 80% of the trafficking involving sexual exploitation?  Furthermore, did you know that according to the U.S. State Department, 600,000 to 800,000 people are trafficked across international borders every year, and between 14,500 and 17,500 people are trafficked into the U.S. each year?  (I suspect that this number is much higher than reported).  More than 70% are female and half are children.  Human trafficking is the third largest international crime industry (behind illegal drugs and arms trafficking). It reportedly generates a profit of $32 billion every year. Of that number, $15.5 billion is made in industrialized countries.
So should it really be surprising that the wealthy and elite feel so comfortable and safe in their secret sins?  Doesn't it seem like the love of money and lustful desires are the perfect combination in which Satan can tempt man?  Remember, Satan cannot create -- that power belongs only to God.  So the Devil finds victory in perverting what God has created, namely us.  And what better satisfaction could Lucifer gain than to convince what God has created in His own image to follow him [the Devil] in his twisted and perverted ways?  Satan has managed to take what is beautiful and pure, and subject innocent children to ugly and deviant behavior.  When taken into consideration with the over 1.3 Billion innocent babies murdered through abortion, I cannot imagine that God is going to tolerate this additional abuse of His children much longer.
The unveiling of Prince Andrew's allegedly lurid past is only the tip of the iceberg, and his royal stature makes him easily conspicuous.  But make no mistake, if the allegations are true, his nobility does not exclude him from joining the ranks of beastly and loathsome men who belong in the filthy gutters of humanity.  These sinful men should comprehend that there is a time limit for how long God will tolerate their warped and perverse appetites.  They should heed Jesus's words:  "Whoever causes one of these little ones who believe in Me to sin, it would be better for him if a millstone were hung around his neck, and he were drowned in the depth of the sea."  Now, I cannot say for certain that each and every child who is seduced into the sex slave trade believes in Christ, but we know that innocent children are precious in His sight, and we are called to humble ourselves like children -- so they matter to Him.
As the days go by, we are seeing the increasing influence of immoral and godless men.  But the Bible tells us this will happen.  The wicked will abuse God's patience, and the righteous will long for heavenly justice.  But we know that His justice will come!  Until then we must trust in His Sovereignty and in the hope and certainty of His deliverance for those who suffer.  I do not think it will be much longer ...

Ecclesiastes 12:14     "For God will bring every act to judgment, everything which is hidden, whether it is good or evil."
Posted by Pam Kohler at 7:00 AM