Are You Worthy To Be A Citizen? 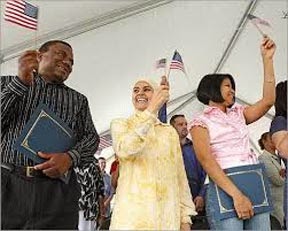 I heard an ingenious idea the other day on talk radio.  The host was informing his audience that a Tennessee State Legislator has proposed a bill that would require all high school seniors in his state to pass a test proving that they know and understand U.S. history and the Constitution before they can graduate.  The test would be similar to the one that legal immigrants must pass to be granted citizenship, and the students would have to answer 60 out of 100 questions correctly to receive their diploma.
Why not?  Don't you think it would bode well for our country if the next generation understood, not only the basics of how our government is to function, but the history of what we've done right and what we've done wrong to get to our present state?
I have been shocked at the lack of knowledge of the American citizenry when it comes to our government and our history.  In fact, over the holidays, I engaged with several college students who all say that History is their least favorite subject.  Since it was my favorite, and I loved studying about the Middle Ages, the various world explorers, and our own American Revolution, I struggled to figure out what makes them uninterested in our historical events or the past.
I think I have discovered the culprit --- it's our modern technology.  The advent of the cell phone and social media has captivated their interest in the "here and now".  They are only curious about discovering what is happening at this moment; or over the last 24-hour period at the longest.  Just look at the various apps they subscribe to .... InstaChat, Snap Chat .... they aren't called instant messaging applications for nothing.
Technology has convinced people that the only important thing in their lives is what is happening now.  Anything that happened in the past has no relevance to them; it doesn't affect their self-absorbed lives, and they aren't interested in anything that breaks their preoccupation with their own emotions, interests, or situations.
So, if I have correctly identified the reason why today's student isn't interested in History or Civics courses, would making them take this test before advancing towards their life goals make any difference?  I don't know, but I think it's worth a shot.  Because if a nation's native citizens cannot identify why they are governed the way they are; or they are unable to relate to the historical events that have shaped their present state, then they don't really know who they are.  And once a nation loses its identity, they are subject to becoming divided and disengaged; open to deception, exploitation, and subjugation.
That's why newly naturalized citizens often make the best Americans.  They know how our government is to perform, and they understand (through our history) what has made this nation so appealing to immigrants for the past two and half centuries.  They are here because they know what this country stands for, what our history is, and they want to be a part of conserving the principles, ideals and dreams of what it means to be an American.
So maybe it's time that the rest of us who claim the title of American (by the grace of God), be required to prove that we are worthy of the benefits of living in this great nation.  And maybe ... just maybe ... it would make us see where, and how far, off course we've come.
Ready to answer some sample questions?  I've picked some random questions from among the 100 that are included in the Naturalization Test for U.S. Citizenship.  See how much you, your children and your grandchildren truly know about the United States of America.

So, how did you do?  Try taking this sample test and then comparing your answers with those of your children or grandchildren.  Is there a discrepancy in knowledge?  If so, are they interested in knowing more about their country?  And, if not, does this concern you?
I just can't help feeling that we have been so blessed to have been born in this nation; a country that hundreds of thousands have yearned to get to because they sensed that it was special and separate from any other land that has existed in history.  God had a purpose in establishing this nation, it is incumbent upon us to understand its exceptionalism, and to teach it to all our generations.  However, I'm afraid that we are losing that sense of extraordinary purpose and blessed opportunity that was our identifiable attribute.
Like the old saying goes ... "Those who don't know history, are doomed to repeat it."  Even the Bible warns us that "As it was in the days of Noah...", and to "Remember Lot's wife."  We cannot afford to become indifferent or unmotivated in these times that carry great risk.  We must be knowledgable about who we are; because when we no longer aware of our past, or why we exist in God's eternal plan, then we are in danger of making destructive and devastating mistakes that could see us fade from history altogether.  And with no knowledge of our unique history, or how we are to govern ourselves, we'll never see it coming.

Job 8:8-10   "For inquire, please, of bygone ages, and consider what the fathers have searched out. For we are but of yesterday and know nothing, for our days on earth are a shadow. Will they not teach you and tell you and utter words out of their understanding?"