Be Careful What You Worship 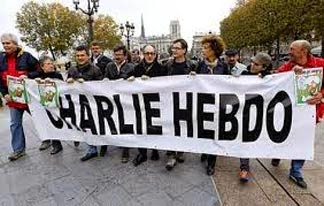 In the wake of the murders in Paris, the world appears to have come together to proclaim their love of liberty, free speech, democracy, and unity.  Media and journalists from around the world have vowed that they will not give way to any attempts to silence their voices.  At the center of the argument for the right of freedom of the press is Charlie Hebdo, the satirical newspaper that, until this past week, was primarily known for its cover.  From what I can tell, it was not hugely successful in France; in fact, most Parisians felt it was distasteful  -- which is a mild word; disgusting is more like it (just google sample covers and you will see why I call them blasphemous) -- and its readership was actually small in comparison to more popular publications like Le Monde.
But, everyone in Paris recognized Charlie Hebdo's covers because, as an article by Jonathan Scriven in The Spectrum points out, the magazine "satirizes, offends, provokes, shocks, and denigrates .... everyone."  So, because of the attacks on its editorial offices, Charlie Hebdo has become a symbol for liberty and freedom; not only for the French, but the world.  As such, it finds itself with a louder voice and a wider audience.
The world has now rallied in support of the first Charlie Hebdo cover since the murder of 12 of its staff members.  As CBS News website reports, the cover "shows a weeping Muhammad, holding a sign saying "I am Charlie" with the words "All is forgiven" above him. Zineb El Rhazoui, a journalist with the newspaper, described the cover as meaning that the journalists were forgiving the extremists for the killings."  There is an accompanying two-page spread "claiming that more people turned out [in the public rallies] to back the satirical weekly, "than for Mass."
While I applaud the new editors of the magazine for defying the efforts of Islamic extremists to frighten them from representing freedom of the press, I think we must make sure that we see the world's new heroes in an accurate light.  I say this, because of the underlying disparagement of religion and faith that may be going unnoticed.  I say this because the lead editorial, in the irreverent manner of the magazine, extolled secularism and doubled down on their goal of ridiculing religion.
The editors made sure the world understood their position.  The editorial read in part, "For the past week, Charlie, an atheist newspaper, has achieved more miracles than all the saints and prophets combined. The one we are most proud of is that you have in your hands the newspaper that we always made."  Message received.  Even in the midst of such carnage, Charlie Hebdo will refuse to consider the majesty of God.  In fact, they will make themselves "like a god"; feeling themselves worthy of adulation, glorification and praise for what they have accomplished, and for their stand against religion.
Just make sure you pay close attention to exactly what it is that will be praised and promoted in the coming days.  It is my understanding that the French take great pride in their separation of church and state; in effect, they have developed what might be called "State Secularism".  It is this secularism that Charlie Hebdo advocated and championed.  But have they forgot that they weren't the only victims of last week's horrific slaughter?  There was a religious component to the hate spawned by the Islamists.  It was the Jewish community, and that's an important fact that must not be diminished.
In our idealism, and in our rush to make this horrendous tragedy about the freedom of expression, doesn't that also include the freedom to express your faith?  We must not ignore that Jews and their faith were a deliberate target of the terrorists.  (In fact, there is some suspicion that the policewoman that was killed before one of the terrorists overran the Jewish supermarket diverted him from his true target:  a nearby Jewish school).  The world also needs to take note of the growing anti-semitism in Europe, and protect the rights of Jews and all faiths, as much as they are willing to protect the freedom of thought and the written word.
I was saddened to read in The Jerusalem Post, "that the response of some on the radical Left in the wake of the Charlie Hebdo massacre was to attack Jews – once again – and encourage publication of anti-Semitic cartoons, supposedly for “balance.” " So, you see, freedom of religion and religious expression is undeniably under assault.
When an unabashedly atheistic magazine, such as Charlie Hebdo, freely ridicules all facets of religion, and is raised to nearly Divine status, I can't help but be concerned that their anti-religion agenda is being given too big of a spotlight.  I am not advocating censorship; but neither do I celebrate an anti-God ideology.  So, while I applaud the new leaders of Charlie Hebdo for not bowing to terroristic threats, I want to make sure that we don't lose perspective on the underlying, yet transparent, derision of faith that is receiving so much publicity.  And whether they recognize Him or not, even Charlie Hebdo's staff will one day see Jesus Christ coming with all the angels and all the nations will be gathered before Him.  It will make the crowds that gathered in Paris, on Charlie's behalf this past week, seem like nothing.

Acts 17:29    "Being then God's offspring, we ought not to think that the divine being is like gold or silver or stone, an image formed by the art and imagination of man."
Posted by Pam Kohler at 7:00 AM