And the anger of the Lord was kindled against Uzzah;
and God smote him there for touching the ark,
and he died there by the ark of God. 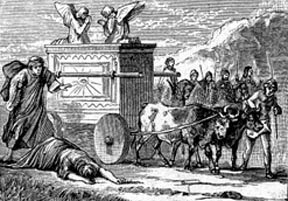 Have you always wondered why this event happened?  I know I have.  And I've always had so many questions, and the answers I've received have always left me unfulfilled.  What exactly was it that Uzzah did that was so offensive to God that He killed him?  Wasn't he simply trying to keep the Ark from falling off of the cart when one of the oxen stumbled?
I've always felt in my spirit that this passage in 2 Samuel had meaning for those of us who worship Yahweh.  And since my Bible study time had brought me to this chapter in the Bible, I was determined to finally answer those questions, and discover the deeper understanding I was meant to discern.
The Biblical critiques of this particular verse have differed as to why the Ark became unsettled.  Some think the oxen stumbled; some think they kicked against the goad (prod) that Uzzah used to drive them; or that they became stuck in the mire.  Ultimately, it doesn't matter what caused the unbalanced state of the Ark; it is the result that concerns us.
For whatever reason, the Ark began to fall off the cart, and Uzzah reached out to set it right.  There is no evidence that he did that with anything but good intentions.  The Ark had been absent from the lives of the Israelites, for many years; having been captured by the Philistines.  It hasn't even been mentioned for 30 Chapters!  After Saul is killed and David defeats the Philistines, he asks for the Ark to accompany him to his own city.  He wishes to return it to its former prominence, and place it as the foundation of his governance of the nation of Israel.
From the evidence presented to us in the Bible, David presents his plan to the nation, and all the nobility and gentry, the elders and officers of Israel agreed, and the number was 30,000.  What an honor it must have been for Uzzah to accompany the Ark and be responsible for guiding it to the City of David!  So what happened that would occasion God to "smite" him?
As I dug for the answer(s), it took me back in Scripture to the 7th Chapter of the Book of Numbers.  God gave His instructions to Moses about how the various divisions of the tribe of Levi were to conduct their service to the Lord in caring for the holy and sacred items of the Tabernacle.  Two wagons and four oxen were given to the sons of Gershon for their duties;  and four wagons and eight oxen were given to the sons of Merari to carry out their responsibilities.  But in Numbers 7:9, it says "But to the sons of Kohath he gave none, because they were assigned the care of the sanctuary and the holy things which had to be carried on their shoulders."
Further more, Exodus 25:13-15 tells us that the Levites were instructed to "make poles of acacia wood and overlay them with gold, And put the poles through the rings on the ark’s sides, by which to carry it.  The poles shall remain in the rings of the ark; they shall not be removed from it [that the ark be not touched]."  Here's the first hint as to why this event was so offensive to God.  The Ark of the Covenant was to be carried on poles, not on a cart.  The second indicator is that members of the Kohathite branch of the Levites were to do the carrying; and it was a duty of priests, and Uzzah was not a priest.  Moreover, Numbers 4:15 tells us, "When it is time to break camp, the clan of Kohath shall come to carry the sacred objects only after Aaron and his sons have finished covering them and all their equipment. The Kohath clan must not touch the sacred objects, or they will die. These are the responsibilities of the Kohath clan whenever the Tent is moved."
The Ark of the Covenant held perhaps the most sacred of the holy objects, "the golden pot that had manna, and Aaron's rod that budded, and the tablets of the covenant." (Hebrews 9:4).  It was truly sacred and holy in God's eyes.  And I suspect that He set such strict rules for its maintenance and care, and how it was to be transported -- along with the severe punishment of death should these rules be ignored -- to impress upon the Israelites that He was to be absolutely obeyed in this matter.
So what are the lessons for us in this tragic story?  There will be many, both Christian and unbelievers, who will declare that God acted too severely.  But might it be a reminder to us that what God declares holy, we should consider with reverence and holy fear?  Moreover, God never changes; so, if this is a crime of mishandling the symbols of His covenant with the nation of Israel, how might He consider our carelessness and permissiveness in disobeying His covenant with us?
One of my favorite theologians is Matthew Henry, and here is his take on how God might perceive our transgressions:  "If the ark was so sacred, and not to be touched irreverently, what is the blood of the covenant?"  Just look at what Hebrews 10:29 says:  What, then, of those who despise the Son of God? who treat as a cheap thing the blood of God's covenant which purified them from sin? who insult the Spirit of grace? Just think how much worse is the punishment they will deserve!
How much more important to God is His Son, than the Ark of the Covenant?  What God sacrificed for us will not be disrespected without major repercussions!  We would do well to listen to God's Word and His warning, or pay the consequences.