We're Being Played; And It's All There In The Playbook

If you aren't familiar with Saul Alinksy's Rules For Radicals ... you should be.  Actually, there is more to the title.  A fuller understanding of the Rules is that it is A Pragmatic Primer for Realistic Radicals.  A true social radical, who wanted complete and thorough social reform, Alinsky was a community organizer from 1939-1971, and his followers are among the most prominent names in politics today.  (Both Barack Obama and Hillary Clinton viewed him as a mentor before his death in 1971). 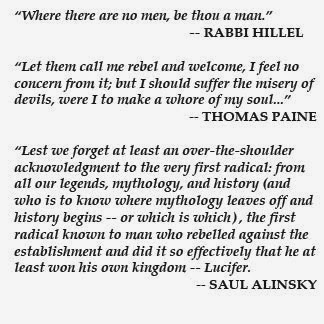 According to his own goals, Alinksy sought to create a guide for future community organizers to use in uniting low-income communities, or "Have-Nots", in order to empower them to gain social, political, and economic equality by challenging the current agencies that promoted their inequality.  The ultimate goal was to successfully unite people into an active organization with the power to effect change on a variety of issues.
But, now we see that some of these rules have been successfully adapted to divide the nation.  At any one time during the last quarter of a century, some of the 12 rules in Mr. Alinsky's little volume of progressive edicts could be seen in operation.  But I just want to point out that a full onslaught of more than half of them are in plain sight today.

RULE #5:  "Ridicule is man's most potent weapon."
•  There is no defense. It’s irrational. It’s infuriating. It also works as a key pressure point to force the enemy into concessions. (Pretty crude, rude and mean, huh? They want to create anger and fear.)
We have seen this tactic employed in the same-sex marriage debate, for instance.  Paint Christians as narrow-minded and exclusive; as denying love between two human beings.  By ridiculing the Church, urge change and acceptance within the rank and file members.  And to further taunt them, threaten their livelihoods by bringing lawsuits against businesses who refuse to compromise.
RULE 6: “A good tactic is one your people enjoy.”
•  They’ll keep doing it without urging and come back to do more. They’re doing their thing, and will even suggest better ones.
Who doesn't enjoy the camera on them as they disrupt traffic, businesses, and law-abiding citizens?  Being part of a "cause" gives meaning to meaningless lives, and contributes to that 15 minutes of fame.
RULE 8: “Keep the pressure on. Never let up.”
•  Keep trying new things to keep the opposition off balance. As the opposition masters one approach, hit them from the flank with something new. (Attack, attack, attack from all sides, never giving the reeling organization a chance to rest, regroup, recover and re-strategize.)
This has certainly been the strategy with the Affordable Health Care Act, Illegal Immigration, Gun  Control, and a number of other issues.  If you think these radical thinkers are responding with new directions and policy changes in "real time", think again; they have anticipated multiple reactions to their tactics, and their game plan was formulated long ago.
RULE 9: “The threat is usually more terrifying than the thing itself.”
•  Imagination and ego can dream up many more consequences than any activist. (Perception is reality ... The possibilities can easily poison the mind and result in demoralization.)
Again, we have seen that with the Obamacare and Illegal Immigration.  Threaten millions with the possibility of fines, no health insurance at all; or with families being split up and deported to Mexico, and you can convince the public that the lesser of two evils is acceptable.
RULE 10: “If you push a negative hard enough, it will push through and become a positive.”
•  Violence from the other side can win the public to your side because the public sympathizes with the underdog.
Ferguson, Missouri and New York City are prime examples of how well this rule can work.  If you can make Michael Brown and Eric Garner the underdogs, and push the narrative that the Black race has played victim long enough, you can use the ensuing violence, hatred and division to further your own agenda -- keep the races alienated and isolated, and you can play them off each other to secure and increase your power base.
RULE 11: “The price of a successful attack is a constructive alternative.”
•  Never let the enemy score points because you’re caught without a solution to the problem.
This rule is actually very similar to the Hegelian Dialectic; basically, you create the problem that you have a pre-formulated solution to, and you step in to save the day and solve the (artificial) problem.  Can you see that encouraging race violence might be a way to introduce the militarization of police (never mind that they vigorously deny it, or condemn the police for their actions).  Just a thought...
Finally, RULE 12: Pick the target, freeze it, personalize it, and polarize it.”
•  Cut off the support network and isolate the target from sympathy. Go after people and not institutions; people hurt faster than institutions. (This is cruel, but very effective. Direct, personalized criticism and ridicule works.)
This strategy has been used against The Tea Party; political figures like Sarah Palin; and military leaders like General Petraeus.  Nothing is too underhanded, too harsh, or too unacceptable.  Whatever it takes to win and take the opposition out of the arena.
So, as you look back over these rules for social radicals, you will see something they all have in common -- and it is more than their similarities to Socialism and Communism.  They all lack a moral defense.  When mankind seeks to change how a society functions through deceptive and immoral means, it results in corruption, godlessness and chaos... just the conditions the Devil loves (and, by the way, to whom Saul Alinsky dedicated his Rules for Radicals -- see above quote).
The truly sad thing is that far too many of Mr. Alinsky's disciples are teaching on our college campuses, and too many of his graduate students are in positions of power.  We must regain a sense of who we are meant to be, and follow our own set of 10 rules; those carved on tablets of stone nearly 3500 years ago.  They are the solutions to all of society's woes.

Isaiah 64:6    "We have all become like one who is unclean, and all our righteous deeds are like a polluted garment. We all fade like a leaf, and our iniquities, like the wind, take us away."