It Feels Like The Terminator Is At Our Doorstep!

It seems that with each day, our future comes closer to resembling a screenplay for the next Terminator movie.  Make no mistake, I applaud the advancement in technology that can aid our Military men and women with the latest in prosthetic development.  I believe that every effort should be made to help them get back to their normal lives, and that being able to connect the device to peripheral nerves that allow for mind control of the prosthesis will help them do just that.  But where does it end? 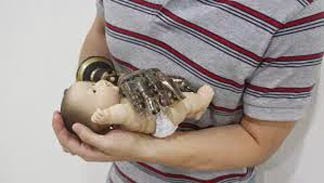 According to CBS News, there is an international team from South Korea and the United States that has designed what they call "smart skin".  It will help amputees "feel their environment, whether that be humidity in the air, or a warm, firm handshake."
This skin has been designed to resemble natural skin, and it also features electroresistive heaters that emulate body heat. In a handshake, or on a baby's tummy, an artificial limb would give off a familiar warmth.  But, now we're getting close to the "creepy factor".  Are we to discern that it won't be long until machines and humans are interchangeable in all areas of our lives?
One researcher at the University of Texas at Dallas says, "The [next] big challenge is to effectively interface these limbs with the human nervous system."  So, sounds like it won't be long until robots will move and feel like us.  And there is ongoing research and development that has them thinking like us.  Anybody else see Arnold Schwarzenegger waiting in the wings?
Along those lines of thinking, the U.K.'s Mail Online, reports that "Robots that can think and act without human intervention are fast moving from fiction to reality ... The nuclear, aerospace, manufacturing and agricultural industries are starting to develop autonomous systems that can carry out tasks that are either too difficult or too dangerous for humans, while driverless cars are already with us."
Then there's this bit of news, that Google has actually set up an Artificial Intelligence (AI) Ethics Board to review the possibilities that AI could become a potential threat to humanity.  In fact, Google has purchased a London-based company called DeepMind, whose goal is to create software that tries to help computers think like humans.  (Has Google forgotten their corporate motto to "do no evil?) 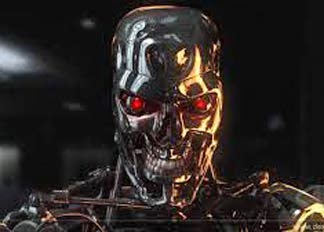 But here's the disturbing part of this new partnership:  Shane Legg, one of the founders of DeepMind, recently said this, in an interview:  "'Eventually, I think human extinction will probably occur, and technology will likely play a part in this."  Among all forms of technology that could wipe out the human species, he singled out artificial intelligence, or AI, as the "'number 1 risk for this century."
And, so, these wise entrepreneurs and inventors now find themselves faced with developing "ethical" robots.  They want us to believe that we can trust robots; that we will always be safe in their presence, and that we should move forward into this new technological age -- at the same time that they state we need to pay attention to what is called the Asimov Three Laws of Robotics (named after sci-fi author Isaac Asimov):  1.  A robot may not injure a human being or, through inaction, allow a human being to come to harm.  2.  A robot must obey the orders given to it by human beings, except where such orders would conflict with the First Law.  3.  A robot must protect its own existence as long as such protection does not conflict with the First or Second Law.
But the very fact that millions of dollars are being spent on research to convince us that robots can be autonomous, and non-threatening, tells me that there are some very real concerns.  And why the rush to bring robots to this advanced stage of creation?  It seems to be coming at us from all sides, and there are enough voices warning us that there is considerable danger.  This technology seems ripe for exploitation -- not only by man, but the power behind all evil creations, our old Enemy, Satan.  We would do well to listen those sounding the alarm that the biggest event in human history, just might be its last.